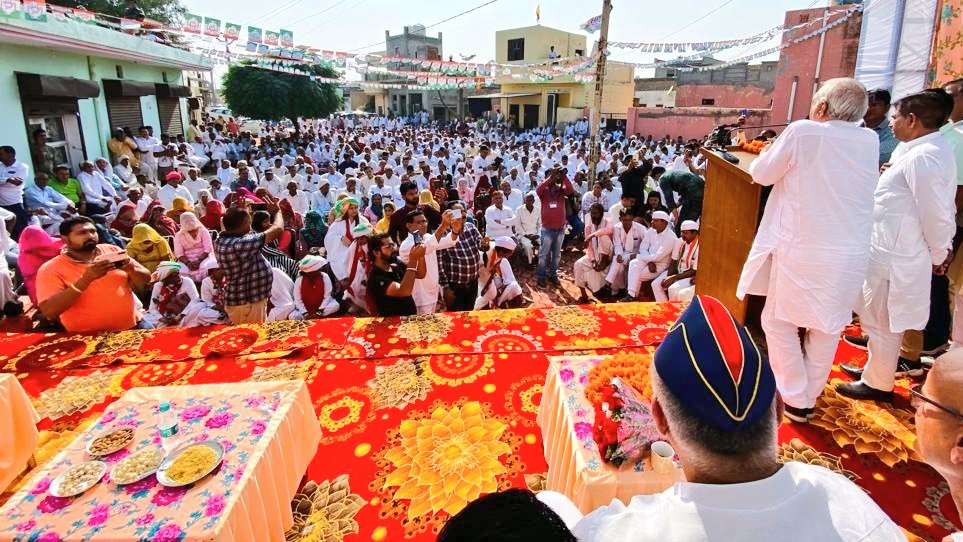 ADAMPUR: The BJP government in Haryana has failed on all fronts and the countdown to its defeat will start from the Adampur assembly by-election with the victory of the Congress, former chief minister Bhupinder Singh Hooda said on Sunday.

“Not only in Adampur but people across Haryana are looking at the Congress with hope,” Hooda said.

The Manohar Lal Khattar-led government has failed on all fronts and today unemployment and inflation are at their peak and crime, corruption and drug menace have increased, he alleged.

“People are eager to bring the Congress back to power in the next assembly polls and the countdown to the defeat of this non-performing government will start from Adampur,” Hooda, who is the Leader of the Opposition in the state, told PTI.

The November 3 bypoll in Adampur in Hisar district was necessitated after Kuldeep Bishnoi, the younger son of former chief minister Bhajan Lal, resigned as MLA from the seat and switched sides from the Congress to the BJP in August.

The Congress has fielded veteran leader and former Union minister Jai Prakash from the seat.

Hooda said all sections of society have been hit hard by the policies of this government.

BJP leaders are now saying a lot of development will be undertaken in Adampur, he said, adding, “The question is if the BJP government wanted to develop Adampur, then who stopped them from doing so for eight years. During this period, they completely ignored Adampur.”

Hooda termed Adampur a stronghold of the Congress and said the late Bhajan Lal was chief minister from the Congress.

Launching an attack on Kuldeep Bishnoi, a former MP from Hisar and Bhiwani and four-time legislator from Adampur, Hooda said everyone knows he hardly spoke in Parliament or in Assembly.

“Moreover, he rarely came to the Assembly,” he said.

Hooda, who has also been an MP earlier, said he knows Jai Prakash and he always raised people’s issues both in Parliament and in the Assembly.

“He has a known track record. He is known for raising people’s voice in a forceful manner in the Assembly and in Parliament,” he said.

Jai Prakash had been a three-term MP from Hisar and a two-time MLA.

Hooda, who has been actively campaigning for Jai Prakash during the past few days, while addressing a gathering in Fransi village earlier, asked the people, “Tell me one decision which this government took in favour of any section.”

With Adampur being predominantly a rural constituency and many farmers from here having participated in the agitation against now-repealed farm laws, Hooda tries to strike a chord with the peasants during his speech.

“Tell me one decision they took for farmers. On the contrary, the government has imposed taxes on fertilisers, seeds and farming equipment. Diesel prices have sharply increased. Input costs have gone up and farmers’ income has gone down. Farmers are not getting MSP for crops,” he said.

Hooda said alleged no new power plant, no new university and no major developmental project was initiated under the BJP government, whereas the state’s debt climbed to nearly Rs 3.5 lakh crore.

“During this government, five lakh pensions of the elderly and other beneficiaries were cut, which will be paid with interest when Congress comes to power after next polls. We will also give Rs 6,000 per month old age pension.

“Scheme of allotment of 100 square yard of plots for poor, Dalit and backward classes families will be revived. During our time, we had given 3.82 lakh such plots. Scheduled Caste students will not face any difficulty in getting scholarships as they are facing now,” he said.

While campaigning, Jai Prakash said that today farmers, labourers, employees, traders, the youth, women and every other section is fed up with this government.

Terming Scheduled Caste, Backward Classes and other weaker sections as backbone of the Congress, Prakash took a dig at Kuldeep Bishnoi, saying when he was in the Congress he could not digest the fact that Udai Bhan, a Dalit, was made state party chief.

Udai Bhan, who too has been actively campaigning in villages, said the BJP knows it has not carried out any development in Adampur and its leaders do not have face to seek votes now.

“Paper leaks, cancellation of exams, forgery and bribery are going on in the name of recruitments,” he said.

In the last eight years, the state government closed 301 government schools completely and another 4,800 schools were shut in the garb of merger, he claimed.