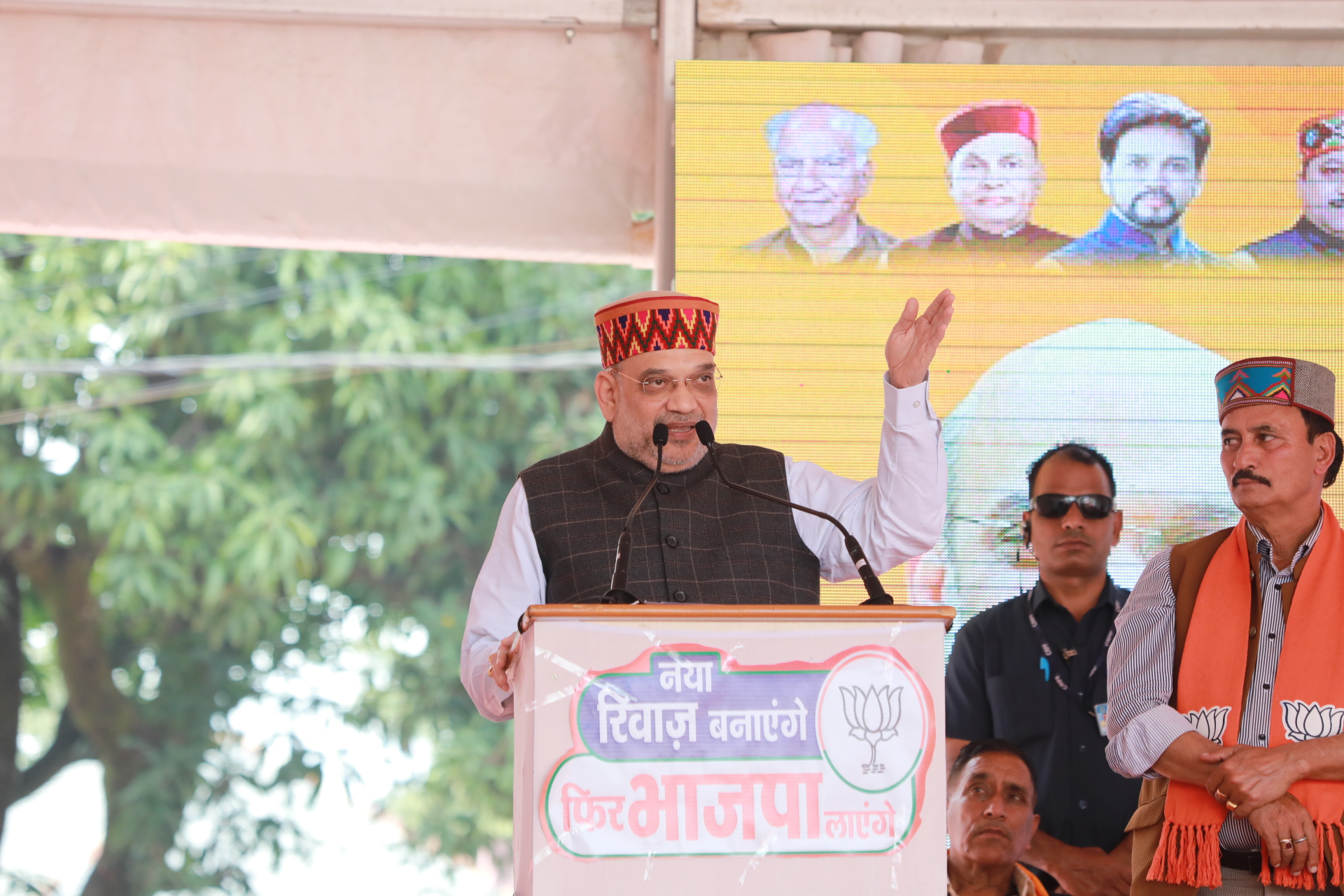 CHAMBA: Union Home Minister and senior BJP leader Amit Shah used the ”ma-beta” barb on Tuesday to hit out at the Congress in Himachal Pradesh as well as in Delhi, wondering how can those facing a chargesheet provide a good government in the hill state.

He also said gone are the days of ”raja-rani” and it is the time of common people in a democracy like India, adding that Prime Minister Narendra Modi has focused on the politics of performance instead.

The home minister addressed a series of public meetings in Chamba, Karsog and Kasumpti to launch an attack on the Congress, saying no one believes in the ”guarantees” given by the party.

Shah, who is on a two-day tour of poll-bound Himachal Pradesh, will spend the night in Shimla. He is scheduled to address poll meetings in the hill state on Wednesday as well.

Addressing a public rally in Chamba in favour of the Bharatiya Janata Party (BJP) candidate in the November 12 Himachal Pradesh Assembly polls and Bhattiyat MLA Bikram Singh Jaryal, Shah urged the voters to re-elect the saffron party to power in the state by breaking the tradition of not repeating a government.

He later addressed another ”Vijay Sankalp Rally” at Karsog and a third one in Kasumpti, near Shimla, in favour of outgoing minister Suresh Bhardwaj.

Shah said he has heard the speeches of Congress leaders and they have nothing to say apart from banking on the tradition of alternative governments in the hill state.

”Change this tradition of alternative governments and repeat the BJP government in the state. Form a BJP government for the second time by breaking this tradition and we will ensure a drugs-free Himachal by putting an end to the business of narcotics here. (Prime Minister Narendra) Modiji has taken a pledge for a drugs-free India in the Azadi Ka Amrit Mahotsav,” the home minister said to a roaring audience in Chamba.

”I have heard the speeches of the Congress leaders. They have nothing to say except stressing on the ‘riwaz’ (tradition),” he said, coining a new slogan — ”Ek bar BJP, bar bar BJP”.

Accusing the Congress of trying to create divisions between upper and lower Himachal, Shah said, ”But Rahul baba, upper Himachal and lower Himachal both belong to the BJP and so does every nook and corner of the state.” Alleging that the Congress was responsible for ”scams” involving a total amount Rs 12 lakh crore during its government at the Centre, the home minister said, ”Still not satiated, they have now come to Himachal Pradesh. How can those facing a chargesheet give a good government to the state?” ”There is democracy in the country and gone are the days of raja-rani. It is the time of the common people. We have to elect a government that works for the development of the state,” he quipped.

Noting that there is nothing in the name of development in the speeches of the Congress leaders, Shah said, ”In Delhi, it is a ma-beta party and here too, it is a ma-beta party, where there is no place for youngsters. Youngsters have a place only in the BJP.” His remarks came in an apparent reference to Congress leaders Sonia Gandhi and Rahul Gandhi in Delhi and Pratibha Singh and her son Vikramaditya Singh in Himachal Pradesh.

”If ma and beta run the party, then where is the place for youngsters?” Shah asked at the Karsog rally.

He said Modi has ended the vices of casteism, appeasement and nepotism in the country.

Shah said the Congress carried on with Jawaharlal Nehru’s mistake of Article 370 of the Constitution, which accorded a special status to the erstwhile state of Jammu and Kashmir, for 60 years, due to which India’s ”crown” had to suffer.

What the Congress could not achieve in 60 years, Modi made it possible eight years, he said.

”Rahul baba, gone are the days of raja-rani. Now, whoever works will rule. Modiji has given importance to the politics of performance,” Shah said at Kasumpti, adding that the prime minister has taken the country’s pride to new heights.

The Congress did not reconstruct temples such as Kashi Vishwanath, the Ram temple or the Badrinath Dham, he said, adding that it did not restore the pristine glory of these shrines due to appeasement and vote-bank politics.

Shah also made light of the promises made by the Congress in the poll-bound state, saying, ”Who will believe in your guarantees…. Guarantees are given by those who have credibility. In the BJP, we work without giving guarantees.” Stressing on Modi’s development plank and his fondness for Himachal Pradesh, he said the prime minister has worked here for years and that is why he is familiar with every corner of the state.

”When there is a double-engine government, it has its own strength. If anyone has benefitted the most during the Modi government, it is the 80 crore poor people of the country,” Shah said, enumerating a number of central schemes.

He alleged that during the previous United Progressive Alliance (UPA) rule in the country, terrorists used to behead Indian soldiers every now and then but the Congress leaders would not even say a word as they feared losing their vote bank.

”But now, it is the Modi government and not that of mauni baba Manmohan Singh,” Shah said, referring to the surgical strikes inside Pakistan.

He also reminded people of the abrogation of Article 370 and the construction of a Ram temple in Ayodhya, saying it was Modi who made these things possible.

”You will see a magnificent, sky-touching Ram temple after 2024 and you should book your tickets,” Shah said while also highlighting the construction of the Kashi Vishwanath corridor in Varanasi.

”The Congress was trying to insult our heritage, our religious sites and icons, but Modiji, without worrying about vote banks, made these possible,” Shah said.

The home minister paid homage to the jawans from Himachal Pradesh who laid down their lives for the nation and said the state sends the highest number of soldiers to the armed forces.

Polling will be held in Himachal Pradesh on November 12 and the counting of votes taken up on December 8. The BJP is seeking a re-election in the state, while the Congress is eyeing to wrest power from the saffron party, even as new entrant Aam Aadmi Party (AAP) is looking to make inroads.