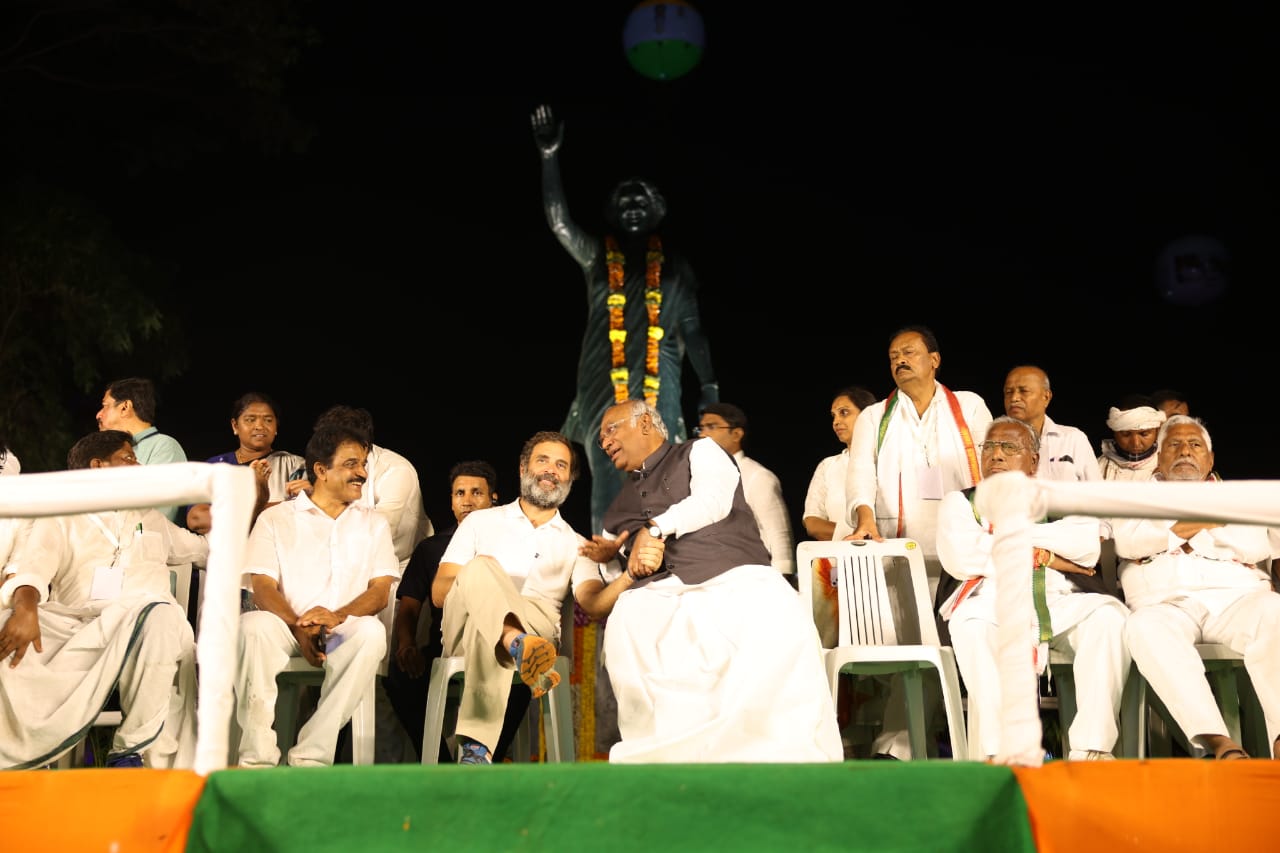 HYDERABAD: In his maiden public address after becoming Congress President, Mallikarjun Kharge on Tuesday said the Congress will give a non-BJP government to the country under the leadership of Rahul Gandhi.

Every step and every voice matters. We all should come together for an equal & empowered India.
We all strive to restore the nation’s unity & harmony for the glory of India.

Joined @RahulGandhi ji in the #BharatJodoYatra in Hyderabad, today.@revanth_anumula pic.twitter.com/npvOUsoOux

Joining the Bharat Jodo Yatra here after being elected to the top party post, Kharge launched a sharp attack on Prime Minister Narendra Modi, accusing him of “spreading lies every day” which could ”destroy the country” in the long term.

“If anyone will bring a non-BJP government under Rahul Gandhi’s leadership, under Congress’ leadership, we will do it,” Kharge said addressing a public meeting here.

The Congress leader said the Bharat Jodo Yatra was receiving support from the youth in huge numbers as Modi had failed to keep the promise of two crore jobs made to them in run-up to the Lok Sabha elections in 2014.

“People are joining Bharat Jodo Yatra in lakhs across the country and in the coming 2024 elections, the Congress government will come to power at the Centre,” he said.

The words of true leaders are a rallying cry for those who seek change.#BharatJodoYatra pic.twitter.com/Pf0FGjWk2S

Kharge lashed out at Telangana Chief Minister K Chandrasekhar Rao and accused him of ignoring the welfare of the people of the state while eyeing a national role for himself.

“KCR is visiting other states and meeting leaders. He went to Kolkata, then Punjab, Tamil Nadu, and Bihar. Look after your own house first.

“By your actions, you are weakening the party which is alive from Kanyakumari to Kashmir and ready to fight the BJP,” Kharge said.

“If you are against the BJP, why did you support them on the farm laws? He (KCR) claims to be in favour of a non-BJP government, but is working in tandem with them,” Kharge alleged.

“KCR’s government is there because of the support of the people of Telangana. But they are trying to destroy everything. There is no difference between KCR and Modi, both are together,” Kharge said.

Kharge, who arrived here in the afternoon, joined the Yatra at its final destination for the day at the Indira Gandhi statue on Necklace Road where a street corner meeting was held.

Gandhi, along with other leaders, party workers and a crowd of supporters who had joined him from the Charminar where he unfurled the national flag, reached Necklace Road.

Minutes later, Kharge joined him on stage and the two leaders hugged each other as supporters cheered on.

The corner meeting saw a huge crowd and screens were put up so that those unable to reach close the stage could watch the event from afar.

The last time Kharge participated in the Yatra was on October 16 in Karnataka’s Bellary and had later addressed a public meeting there.

On October 17, polling was held for the post of Congress president between Kharge and Shashi Tharoor in which the former came out victorious.

The march on Tuesday resumed from Matha Temple in Shamshabad and halted at the Legacy Palace at Bahadurpura in Hyderabad for an afternoon break.

The Yatra’s night halt will be at Gandhi Ideology Center in Bowenpally.