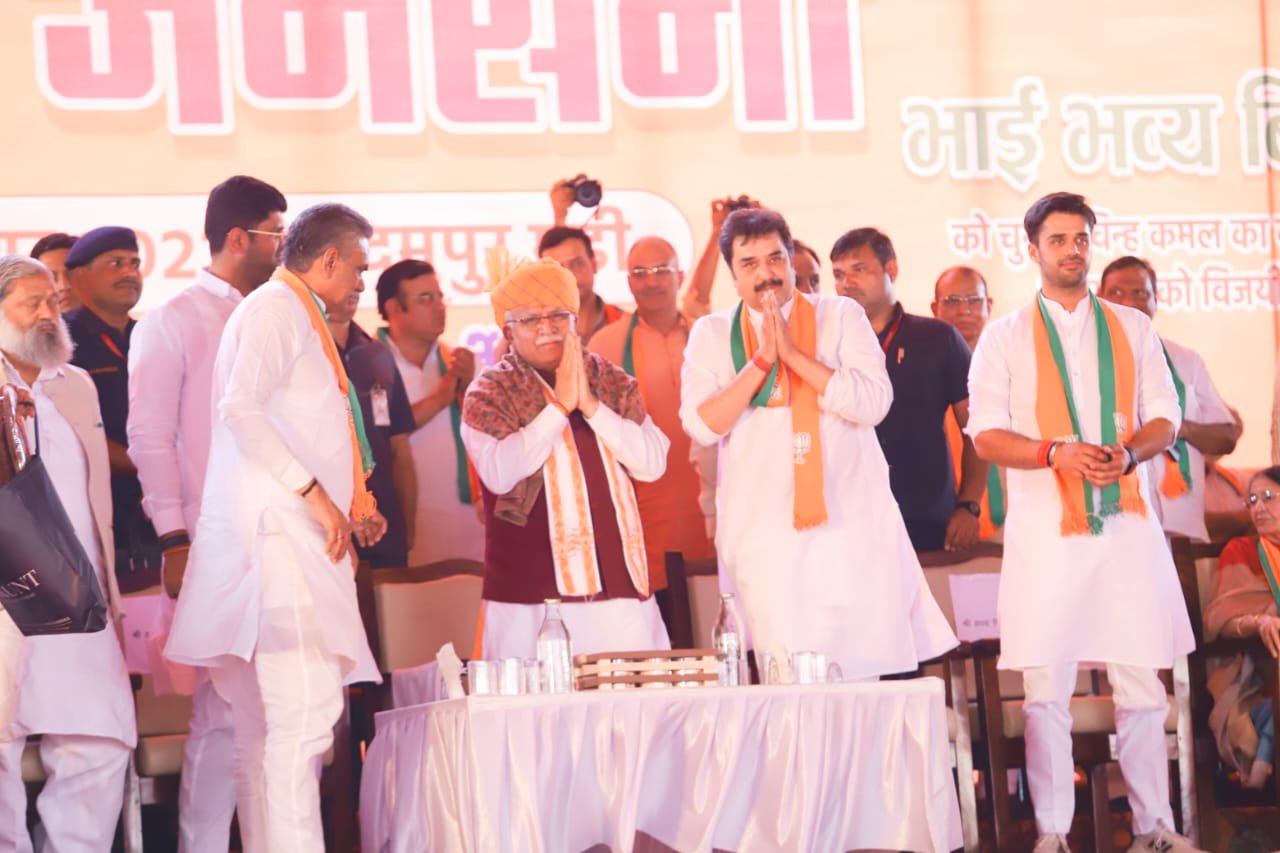 CHANDIGARH: Haryana Chief Minister Manohar Lal Khattar on Tuesday launched a scathing attack on his predecessor Bhupinder Singh Hooda, asking the people of Adampur, which goes to bypolls on November 3, to ”teach a lesson” to those who ”betrayed” former chief minister Bhajan Lal.

Khattar while addressing a rally in Adampur in Hisar on the last day of the campaigning, said ”this is not just a by-election, but an opportunity” to end the long gap of 26 years for the Bhajan Lal family for being out of government.

Before his address, Khattar gently held the hand of Bhajan Lal’s widow and former MLA Jasma Devi, who was also present at the rally, referring to her as his elder sister. She made a brief appeal to voters from the stage telling them to make her grandson Bhavya, a BJP candidate, victorious.

The bypolls were necessitated after Kuldeep Bishnoi, the younger son of former chief minister Bhajan Lal, resigned as MLA from the seat and switched sides from the Congress to the BJP in August. His son Bhavya is contesting the by-election.

Khattar also made a mention of the year 2005, when the Congress had won 67 seats in the 90-member assembly under Bhajan Lal’s leadership, but he was edged out of the chief ministerial race by Hooda.

Lunching an attack on Hooda, the chief minister told the gathering, ”Chaudhary Bhajan Lal was contender for CM, but overnight a conspiracy was hatched and those who hatched it are now seeking votes from you today. They betrayed the people of Adampur”.

He then told the voters it is time to ”teach a lesson to them and settle the scores”.

Khattar also accused Hooda, who served two terms as the chief minister between 2005 and 2014, of not doing any work in Adampur because it was Kuldeep Bishnoi’s area and he was MLA from there.

Khattar appealed to the people of Adampur to make Bhavya victorious, saying it is the BJP candidate’s job to take care of the rest.

He spoke about several good governance initiatives and transparency measures of his government that had reduced crime and corruption in the state.

He also said the BJP ended caste-based politics, which prevailed in the state earlier.

”During the Congress rule at the Centre and in Haryana, there were scams and corruption was rampant,” he alleged.

”Today, they talk about their love for the Dalit community. But everyone knows what they did to their state president Ashok Tanwar (now in AAP) and Kumari Selja,” he said, again hitting out at Hooda.

Everyone knows about Mirchpur (Dalit killings) incident in Hisar during Congress’ time, he said.

Calling Congress a ”sinking ship”, Khattar said, ”Congress Mukt Bharat is almost complete. Their government is left only in Rajasthan and Chattisgarh”.

Attacking Hooda and his MP-son Deepender Singh, Khattar said the Congress in Haryana has been reduced to a party of ”Bapu beta” and because of this their party senior leaders like Kumari Selja, Randeep Singh Surjewala and Kiran Choudhary stayed away from campaigning.

He dubbed Congress’ ”imported candidate” and former MP Jai Prakash like a ”fused bulb who will be rejected by the people”.

In his speech, Kuldeep Bishnoi appealed to the voters in Adampur to elect Bhavya, to once again bring back the ”golden period” in the region.

He said he resigned as MLA and quit the Congress after consulting his constituents and added he did so because he was impressed by programme and policies of Prime Minister Narendra Modi and his vision, by Khattar’s work and because he wanted to fulfil Bhajan Lal’s vision for a prosperous Adampur.

”Joining the BJP was my life’s best decision,” he said.

Bishnoi, who had also entered into a tie-up with the Bahujan Samaj Party (BSP) and the BJP when he headed his Haryana Janhit Congress earlier, said the people of his constituency may have formed different opinions about the decisions he took in the past, but they always stood by him.

Bishnoi alleged that when Hooda was the CM he discriminated against Adampur.

”With what face Hooda and Deepender are seeking votes from you,” he asked the gathering.

Praising Khattar, Bishnoi said even when he was in the Congress and an opposition MLA, the chief minister always accepted the demands which he put forth before him relating to Adampur’s development.

He said projects worth Rs 530 crore for Adampur were already sanctioned by Khattar.

In his address, Haryana Home Minister Vij dubbed the Congress as a sinking ship and said it is ironic that Rahul Gandhi is holding ”Bharat Jodo Yatra” whereas ”Bharat Todo is Congress’ DNA”.

The AAP ”poses no challenge”, Vij said, calling the Arvind Kejriwal-led party ”Kharpatwar” (weed) asking the people to ”throw it out in bypolls”.