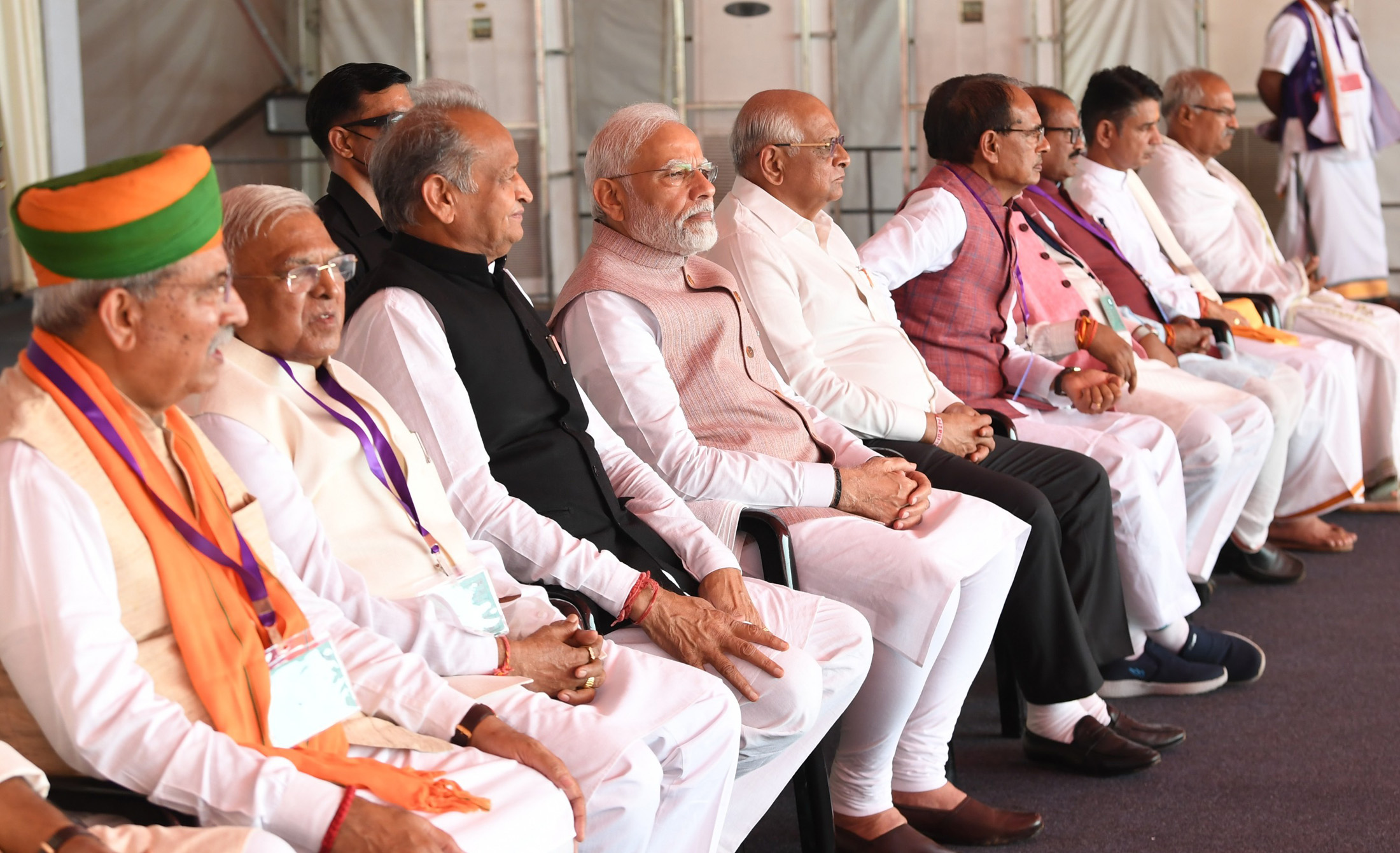 NEW DELHI: The Prime Minister, Narendra Modi attended a public programme ‘Mangarh Dham ki Gaurav Gatha’ today and paid homage to the sacrifices of unsung tribal heroes and martyrs of the freedom struggle. After arriving at the venue, the Prime Minister performed Dhuni Darshan and paid floral tributes to the statue of Govind Guru.

Mangarh Dham is a reflection of tenacity, sacrifice, and patriotism of tribal heroes. This is the common heritage of Rajasthan, Gujarat, Madhya Pradesh & Maharashtra: PM @narendramodi pic.twitter.com/9RIXh1uSZd

Addressing the gathering, the Prime Minister said that it is always inspiring to be in the holy land of Mangarh which is a symbol of tapasya, sacrifice, bravery and sacrifice of our tribal bravehearts. “Mangarh is a shared heritage of the people of Rajasthan, Maharashtra, Madhya Pradesh and Gujarat”, he said. The Prime Minister paid tributes to Govind Guru whose death Anniversary fell on 30th October.

As the Chief Minister of Gujarat, the Prime Minister recalled serving the region of Mangarh which is part of Gujarat and informed that Govind Guru spent the last years of his life here, and his energy and knowledge can still be felt in the soil of this land. The Prime Minister remembered that the entire area which was a barren land earlier got transformed with greenery after he urged everyone via the platform of Van Mahotsav. The Prime Minister thanked the Tribal Community for selflessly working for the campaign.

The Prime Minister said that the development not only resulted in an improvement of the life quality of the local people but also led to the propagation of the teachings of Govind Guru. “Great freedom fighters like Govind Guru were the representative of India’s tradition and ideals”, the Prime Minister continued “Govind Guru lost his family but never lost his heart and made every tribal person his family.” If Govind Guru fought against Britishers for the rights of the tribal community, the Prime Minister pointed out, he also campaigned against the ills of his own community as he was a social reformer, spiritual leader, a saint and a leader.

His intellectual and philosophical aspect was as vibrant as his courage and social activism, the Prime Minister said.

Remembering the massacre of 17th November 1913 in Mangarh, the Prime Minister remarked that it was an example of extreme cruelty by British rule in India. Shri Modi said, “On one hand we had the innocent tribals who were seeking independence while on the other hand, it was the British colonial rulers who after surrounding the hills of Mangarh, massacred more than one thousand five hundred innocent men, women, elderly and children in broad daylight.” The Prime Minister interjected that due to unfortunate circumstances, such a significant and impactful event of the freedom struggle could not find its place in the history books. The Prime Minister exclaimed, “In this Azadi ka Amrit Mahotsav, India is filling this void and correcting the mistakes that were made decades ago.”

The Prime Minister emphasised that “India’s past, history, present and India’s future will never be complete without the tribal community. Every page of the story of our freedom struggle is filled with tribal valour.” The Prime Minister recalled glorious struggles that date back to as early as the 1780s when Santhal Sangram was fought under the leadership of Tilka Manjhi. He mentioned 1830-32 when the country witnessed Larka Andolan under the leadership of Budhu Bhagat. In 1855 Sidhu-Kanhu Kranti energised the nation. Bhagwan Birsa Munda inspired everyone with his energy and patriotism. “You will not find any patch of time starting from the beginning of slavery centuries ago, till the 20th century when the flame of Azadi was not kept ablaze by the tribal community”, the Prime Minister said. He mentioned Alluri Sitarama Raju in Andhra Pradesh. In Rajasthan, even before that, the Adivasi Samaj stood with Maharana Pratap. “We are indebted to the tribal community and their sacrifice. This samaj has preserved India’s character in nature, environment, culture and traditions. Today is the time for the nation to thank them by serving them”, the Prime Minister said.

The Prime Minister informed that on 15th November, the country is going to celebrate Janjatiya Gaurav Diwas on the birth anniversary of Bhagwan Birsa Munda. “The Janjatiya Gaurav Diwas is an endeavour to educate the masses about the history of tribals in the freedom struggle”, he said. Shri Modi noted that special museums dedicated to tribal freedom fighters are being built across the country to take the history of tribal society to the masses. He further added that this grand legacy will now become a part of the thought process and provide inspiration for the younger generations.

The Prime Minister expressed the need to work with a dedicated spirit to extend the role of tribal society in the country. He highlighted that the country is working with clear policies to serve the diverse tribal society in all parts of the country ranging from Rajasthan and Gujarat to Northeast and Orissa. The Prime Minister highlighted that the tribal population is being provided water and electricity connections, education and health services, and employment opportunities through Vanbandhu Kalyan Yojana.

“Today, forest cover is also increasing in the country and resources are being protected” he continued, “At the same time, tribal areas are also being connected with Digital India.” The Prime Minister also mentioned Eklavya residential schools that provide opportunities for modern education to tribal youth along with traditional skills. The Prime Minister also informed that he will be heading to Jambughoda to inaugurate the grand administrative campus of the university named after Govind Guru Ji.

The Prime Minister recalled that only last evening he flagged off a train on Ahmedabad-Udaipur broad gauge line. He underlined the importance of the 300 km line for the people of Rajasthan as it will connect many tribal areas of Gujarat with the tribal areas of Rajasthan and will give a push to the industrial development and employment in these regions.

As part of #AzadiKaAmritMahotsav, the government has initiated several steps to celebrate unsung tribal heroes of the freedom struggle

As part of Azadi ka Amrit Mahotsav, the government has initiated several steps to celebrate unsung tribal heroes of the freedom struggle. These include declaring 15th November (birth anniversary of tribal freedom fighter Birsa Munda) as ‘Janjatiya Gaurav Divas’, setting up tribal museums across the country etc to recognise the contribution of tribal people to society and increase awareness about their sacrifices in the freedom struggle. In yet another step in this direction, the Prime Minister attended a public programme – ‘Mangarh Dham ki Gaurav Gatha’ at Mangarh Hill, Banswara, Rajasthan, to pay homage to the sacrifices of the unsung tribal heroes and martyrs of the freedom struggle. During the programme, the Prime Minister paid homage to Bhil freedom fighter Shri Govind Guru and also addressed a gathering of Bhil Adivasis and other tribal populations of the region.

Mangarh Hill holds special importance for the Bhil community and other tribes of Rajasthan, Gujarat, and Madhya Pradesh. During the freedom struggle where Bhils and other tribes engaged in a long stand-off with the British, more than 1.5 lakh Bhils rallied at Mangarh Hill on 17th November 1913 under the leadership of Shri Govind Guru. Britishers opened fire at this gathering, leading to Mangarh Massacre where approximately 1500 tribals were martyred.