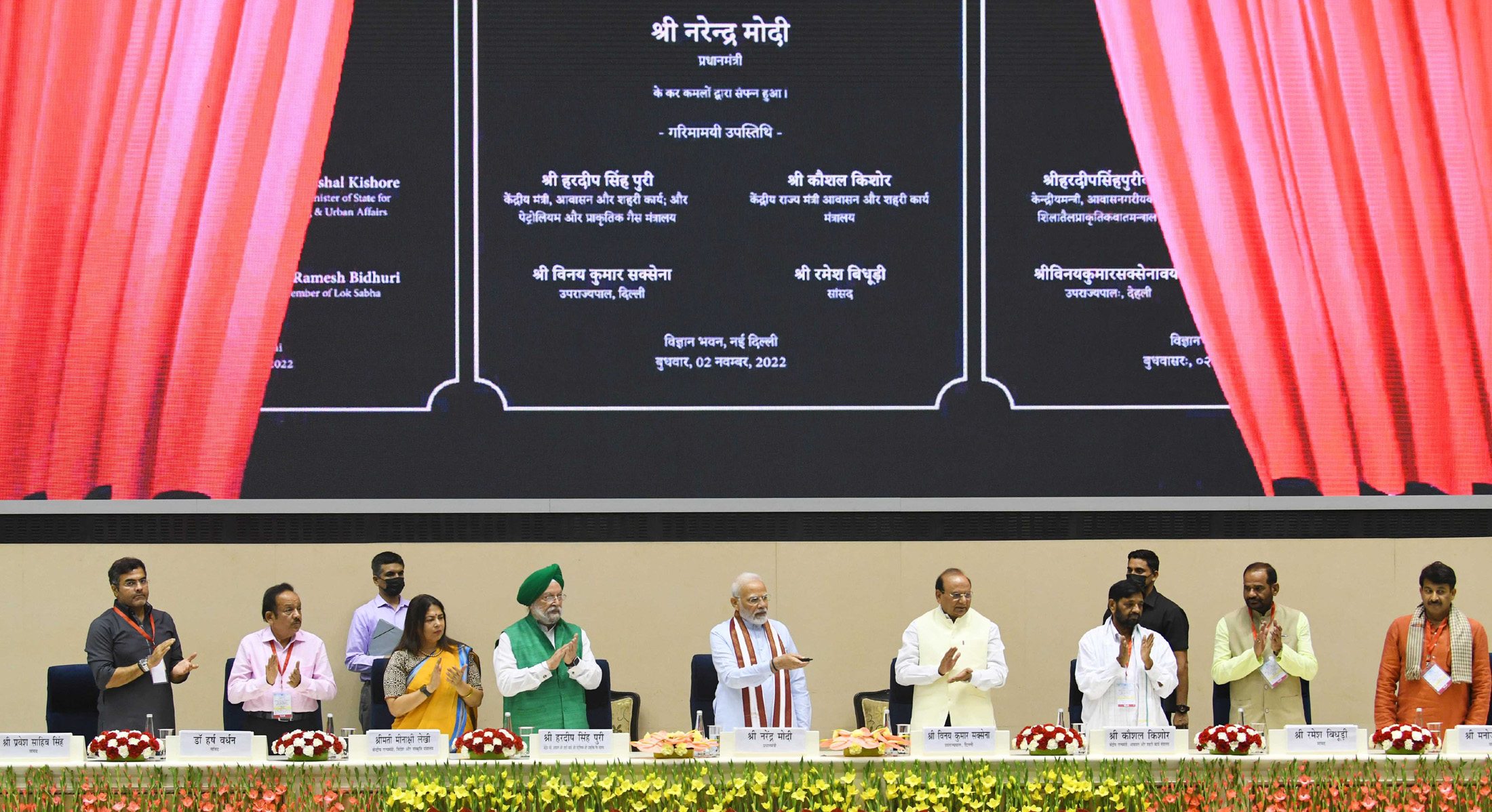 Addressing the gathering, the Prime Minister said that today is a big day for hundreds of families of Delhi as it is a new beginning for many jhuggi dwelling poor families.

The Prime Minister informed that more than 3000 homes have already been prepared in the first phase of Kalkaji Extension alone. Very soon, other families living in the area will get the opportunity to enter their new homes. “I am sure that these efforts of the central government will play a big role in making Delhi an ideal city”, he said.

Remarking on the development that is witnessed and the dreams that are realised in big cities like Delhi, the Prime Minister said that the foundation of such developments and dreams is made up of the hard work and efforts of the poor.

“Paradoxically”, he said, “these poor people have been made to live in deplorable conditions. When there is such an imbalance in one single city, who can we think of holistic development? In the Azadi ka Amrit Kaal, we have to fill this huge gap. That is why, the country is moving on the path of Sabka Saath, Sabka Vikas, Sabka Vishwas and Sabka Prayas for everyone’s upliftment”

In-situ slum rehabilitation in 376 informal settlements is being undertaken. The objective of the rehabilitation project is to provide a better and healthy living environment to the residents of these clusters, with modern amenities and facilities.#JahanJhuggiWahanMakaan pic.twitter.com/tTPUfUklRv

The Prime Minister pointed out that for decades, the system of governance in the country was plagued with the mentality that poverty is a poor people’s issue but the government of today belongs to the poor and it is not in its nature to leave them be. He highlighted that the poor remain central to policy formation and decision-making systems and that the government is treating the issues of the urban poor with equal importance”, Shri Modi added.

With the project cost of ₹ 345 crores, phase I of the project at the Bhoomiheen Camp has 3024 ready-to-move-in flats. It will further the vision of #HousingForAll given by the Hon'ble PM Shri @narendramodi ji.#JahanJhuggiWahanMakaan pic.twitter.com/0VcdI6yv4l

The Prime Minister said that there were 50 lakh people in Delhi, who did not even have a bank account. That deprived them of any benefit of the banking system. “They were in Delhi but Delhi was very far from them”, he said. This situation was changed by the government and a campaign for financial inclusion via opening accounts was undertaken. This resulted in direct benefits to the poor people of Delhi, including street vendors. He also commented on the ubiquitous penetration of UPI. More than 50 thousand street vendors received financial assistance under the SVANidhi scheme.

It was a blessed day for thousands of Delhi's slum
dwellers as they got their 'Key for better future'.
Furthering the vision of #HousingForAll, Hon'ble PM @narendramodi handed over the keys of newly constructed flats to urban slum dwellers at Bhoomiheen Camp in Kalkaji, Delhi. pic.twitter.com/QQ8pXZBA0X

The Prime Minister said, “We are ensuring ‘Ease of Living’ for the poor in Delhi through ‘One Nation, One Ration Card’.” This proved hugely beneficial for poor segments during the pandemic. Lakhs of eligible vulnerable people are receiving free ration from the central government for the last two years. In Delhi only, more than 2.5 thousand crore Rupees were spent on this, he informed.

During his address at the inaugural event of 3024 newly constructed EWS flats at Kalkaji, Delhi, Hon'ble Minister, @MoHUA_India, Shri @HardeepSPuri, expressed his joy and congratulated the proud beneficiaries. pic.twitter.com/igxfvclEj7

The Prime Minister continued and informed that more than 40 lakh poor people in Delhi got the security of insurance. Medical expenses were brought down through Jan Aushadhi Schemes. “When there is this security in life, the poor work hard with all their might without rest.

He works to lift himself out of poverty.”, he added. The Prime Minister said that all this is done without much fanfare and expansive advertisements. This is because “we live to bring change in your lives”, he said.

Speaking on the topic of unauthorised colonies in Delhi the Prime Minister acknowledged the constant worry of the people about the status of their houses. “The central government has also done the work of reducing this concern of the people of Delhi. Work is going on to regularise the houses built in unauthorised colonies of Delhi through the PM-UDAY scheme. Till now thousands of people have taken advantage of this scheme”, he said. He also mentioned that 700 crore rupees have been spent in providing interest subsidies to poor and middle-class families for constructing their own houses.

Hon'ble PM, Shri @narendramodi ji, enlightened the arena with his words of wisdom. He mentioned that it's a proud moment for numerous poor families of Delhi to have their own house. pic.twitter.com/XdRndPWZBS

“Our government is leaving no stone unturned to fulfil the aspirations of citizens in Delhi. The aim of the central government is to turn Delhi into a grand city complete with all amenities in accordance with its status as the capital of the country. Referring to his talk of ‘aspirational society’ from the ramparts of Red Fort, the Prime Minister said Delhi’s poor and middle class is both aspirational and talented.

Emphasising the development in the Delhi NCR region, the Prime Minister informed about the expansion of metro routes from 190 km to 400 km after 2014. He further noted that in the last 8 years, 135 new metro stations have been added to the network which ended up saving time and money. The Prime Minister also informed that the Government of India with an investment of Rs. 50 thousand crores is widening roads to provide relief to Delhi from traffic congestion. The Prime Minister gave examples of Dwarka Expressway, Urban Extension Road, Akshardham to Baghpat 6-lane Access Control Highway and elevated corridor in the form of Gurugram-Sohna Road.

The Prime Minister informed that services like Rapid Rail for Delhi NCR are going to begin in the near future. He noted the grand construction of the New Delhi Railway Station that is going to take place and expressed delight at the construction of Bharat Vandana Park on 80 hectares of land in Dwarka which is now moving towards completion in the next few months. “I am told that over 700 big parks in Delhi are maintained by the DDA. Various parks are being developed by DDA on the 22 km stretch between Wazirabad barrage to Okhla barrage”, he informed.

The Prime Minister asked the beneficiaries of the new houses to use LED bulbs only to save electricity, to make sure no water gets wasted and most importantly to keep the entire colony clean and beautiful. He noted that today the government of India is building houses for crores of poor people, supplying water through taps, providing electricity connections, Ujjwala cylinders, and so we have to break the age-old misconception that slums are associated with filth. “I am sure everyone will continue to play a leading role in the development of Delhi and the country. With the contribution of every citizen, the journey of Delhi and India’s development will reach new heights”, the Prime Minister concluded.

In line with the vision of the Prime Minister to provide housing for all, in-situ slum rehabilitation in 376 Jhuggi Jhopri clusters is being undertaken by Delhi Development Authority (DDA). The objective of the rehabilitation project is to provide a better and healthy living environment to the residents of Jhuggi Jhopri clusters, with proper amenities and facilities.

DDA has undertaken three such projects at Kalkaji Extension, Jailorwala Bagh and Kathputli Colony. Under the Kalkaji Extension Project, in-situ Slum Rehabilitation of three slum clusters namely Bhoomiheen Camp, Navjeevan camp and Jawahar camp located at Kalkaji is being taken up in a phased manner. Under Phase I, 3024 EWS flats at the nearby vacant commercial centre site have been constructed. The Jhuggi Jhopri site at Bhoomiheen Camp will be vacated by rehabilitating eligible households of Bhoomiheen camp to the newly constructed EWS flats. Post vacation of Bhoomiheen Campsite, this vacated site will be utilised for rehabilitation of Navjeevan Camp and Jawahar Camp in Phase II.

Phase I of the Project has been completed and 3024 flats are ready to move in. These flats have been constructed at the cost of about Rs. 345 crores and are equipped with all civic amenities including finishing having been done with vitrified floor tiles, ceramics tiles, Udaipur green marble counter in the kitchen, etc. Public amenities like community parks, electric substations, sewage treatment plants, dual water pipelines, lifts, underground reservoirs for hygienic water supply etc. have also been provided. The allotment of flats will provide ownership title and a sense of security to the residents.