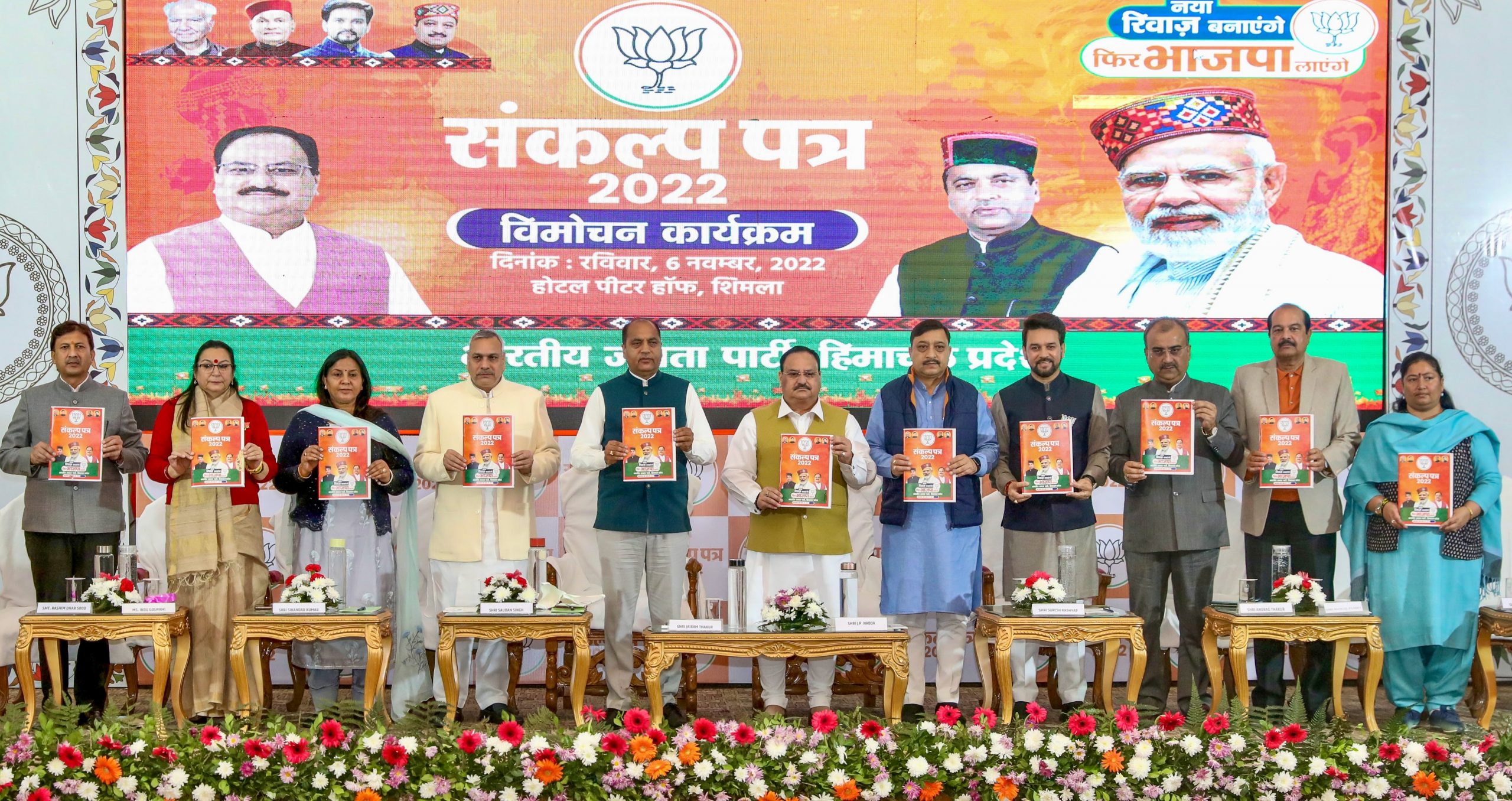 A mix of Hindutva, development and welfare promises underpinned the ‘sankalp patra’, with Nadda also releasing a separate manifesto for women, a voting segment where measures like free grains, cooking gas connections and toilets have drawn favourable response for the BJP in different polls.

With less than a week left for assembly polls in his home state on November 12, Nadda promised creation of 8 lakh jobs, including government, cycles for girl students in classes six to 12th and scooters for girls pursuing higher education and five new medical colleges if his party retained power.

A new BJP government will also order a survey of Waqf properties to prevent their “illegal” use, he said.

Releasing the BJP’s ‘Sankalp Patra’, Nadda promised implementation of UCC in Himachal Pradesh if the party is voted to power and said a committee will be formed for it.

He stressed the sops offered by his party cannot be called freebies as there is a fine distinction between empowerment and allurement.

While the BJP is for empowerment of different segments of society, it is against allurements, he said, adding it has taken a similar view in its response to the Election Commission in the debate on freebies, considered a drain on exchequer for getting votes and spurned as “revdi” by Modi.

Replying to a question, Nadda criticised the Congress manifesto, which was released on Saturday and also promised several sops, saying it lacked both vision and direction.

He also rejected any comparison between the Congress and the BJP manifestos, saying the opposition party has made populist and tall claims as it does not intend to fulfil them.

He also claimed that its governments have not implemented the promises, including on jobs, made in Rajasthan and Chhattisgarh in 2017.

Asked about the BJP’s stand on the old pension scheme (OPS) which the Congress has promised to revive, party leader Mangal Pandey answered the query, saying the state government has formed a committee and will be guided by its report on the issue.

The OPS issue has gained traction in the small hill state where current and former government employees are a sizeable vote bank.

The BJP hopes to counter it with its own planks of welfarism besides the Hindutva factor and Modi’s appeal that seems to resonate beyond people’s grievances with bread and butter issues.

Nadda expressed confidence that people will change the precedence of the last few decades of voting out the party in power by electing the BJP again.

“We have not only fulfilled what we had promised but have also done a lot of things which were never promised,” he told reporters, listing measures like free grain scheme, setting up of AIIMS and IIM in the state and several other welfare initiatives.

People have already changed such a “riwaj” (convention) in states like Uttarakhand, Goa and Uttar Pradesh and will do in Himachal as well, he said.

In its manifesto of 11 “commitments”, the BJP promised Rs 3,000 to farmers over and above Rs 6,000 given to them annually under a central government scheme, connecting all villages with roads and a programme named ‘Shakti’ to invest Rs 12,000 crore in the next 10 years to develop transport and physical infrastructure around temples.

It also promised GST relief for farmers on apple packaging, Rs 900 crore investment to boost start-ups, increase in ex-gratia for dependent of soldiers killed in the line of duty and resolving all discrepancies in the remuneration of government employees.

Among the 11 promises made in the manifesto for women are three free LPG cylinders for the poor households and increase in financial support for women from poor families in marriage.