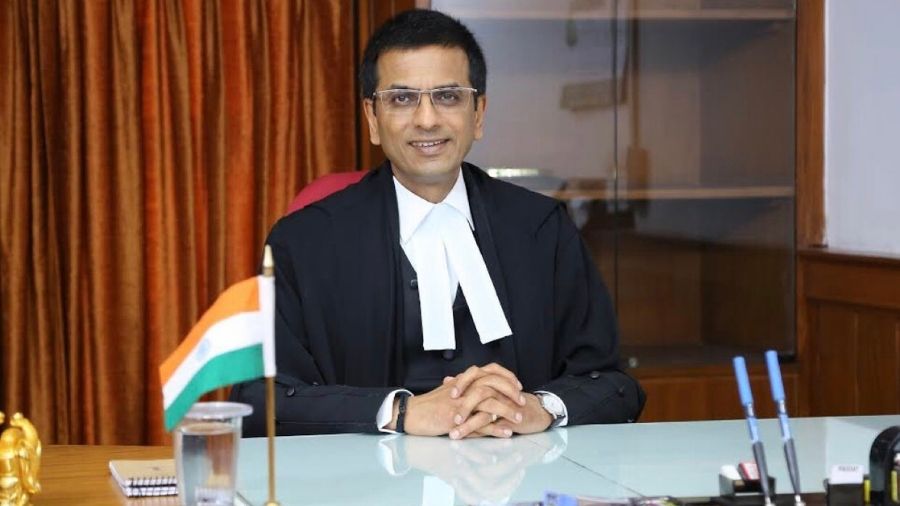 NEW DELHI: Supreme Court judge Justice DY Chandrachud, who will take oath as the 50th Chief Justice of India (CJI) on November 9, said on Monday that he has “very big-sized shoes to fill” as Justice UU Lalit’s successor and hoped to continue the “good work” initiated by him.

CJI Lalit, who had a short tenure of 74 days as the head of the judiciary, is set to demit the office at the age of 65 years on November 8 which is a court holiday.

Justice Chandrachud, while addressing the farewell function organised by the Supreme Court Bar Association (SCBA) for Justice Lalit, said the 49th CJI showed remarkable leadership and was committed to increasing access to justice during his tenure.

CJI Lalit prioritised listing of important constitutional issues, decreased pendency and helped transform the image of the institution from a “colonial justice delivery system to a system where people have to be reached out to”, the senior-most apex court judge said.

“Personally, as your successor, I am conscious that I have very big sized shoes to fill because you have really raised the bar for the chief justice,” Justice Chandrachud, who is the son of former CJI YV Chandrachud, said.

Elevated as a judge of the Supreme Court on May 13, 2016, Justice Chandrachud will have a tenure of two years as the CJI and is due to retire on November 10, 2024.

The event was attended by several dignitaries, including judges of the Supreme Court and Attorney General of India R Venkatramani.

“We have seen how he (CJI Lalit) prioritised listing of important constitutional cases and how he ensured accessibility to these hearings for general public by live streaming them… (addressed issued concerning) listing process and improving transparency in registry and decreasing pendency. During my tenure, I hope to continue all the good work that CJI Lalit has begun,” Justice Chandrachud said.

He emphasised that institutions strengthen when individuals work together and added that CJI Lalit “expanded the reach of the National Legal Services Authority” and “rolled the wheel in helping us transform the image of our institution from a colonial justice delivery system to a system where people have to be reached out to”.

Justice Lalit became the second CJI to be directly elevated to the apex court bench from the Bar. Justice S M Sikri, who became the 13th CJI in January 1971, was the first lawyer to be elevated directly to the top court bench in March 1964.

Justice Chandrachud said CJI Lalit, whose career is a reflection to public service, was collaborative and consultative with other judges on the bench and was above all, compassionate.

His tenure as a judge and CJI was marked with a close collaboration with the Bar and “that sense of stability” must continue to remain, which would be my endeavour as well, he said.

Justice Lalit was a senior advocate and was appointed a special public prosecutor for the CBI to conduct the trial in the 2G spectrum allocation case before being appointed a judge of the apex court on August 13, 2014.

SCBA president senior advocate Vikas Singh said although CJI Lalit “unfortunately had a very short tenure”, he addressed issues raised by the Bar, including listing of cases and “(these) 74 days are a testimony of all that has been done”.

“The kind of humbleness that he talked to lawyerthere was so much respect shown to junior-most members of the Bar. It was so humbling,” the senior lawyer said.

In his address, Justice Chandrachud stated that while appointment to the Supreme Court is an honour, “it can also be daunting for judges coming from the high courts” as the top court “has its own work rhythm” and deals with a variety of laws and he “came to grips with criminal law” while sitting with the outgoing CJI.

He also said that one does not accept judgeship for monetary requirements or the perquisites as they are all “in vain” if one is not true to the “call of consciousness which leads to these offices”.

Justice Chandrachud said that CJI Lalit’s demeanour was an example on how “we can remain calm even in the most stressful of solutions”, which “reflected his temperament a yearning to reach out to unheard voices”.

“As a chief, despite the limitation on time, he has been kind enough to hear every one, take multiple steps to provide solutions while prioritising consultation and deliberation,” Justice Chandrachud said.

He also shared his exchange with CJI Lalit on the latter’s conversation with a former CJI on how a judge should read a brief, which “left a deep imprint on his mind”.

The purpose of a judge reading a brief is to meet the lawyer intellectually and not to beat the lawyer by way of aggression in court, he shared.

Rai asserted that the “collegium system is working absolutely nicely” and said “he (law minister) is a political person (but) judges do not have the medium to say something or make a statement”.

In this article:Chief Justice of India, CJI U U Lalit, Justice D Y Chandrachud