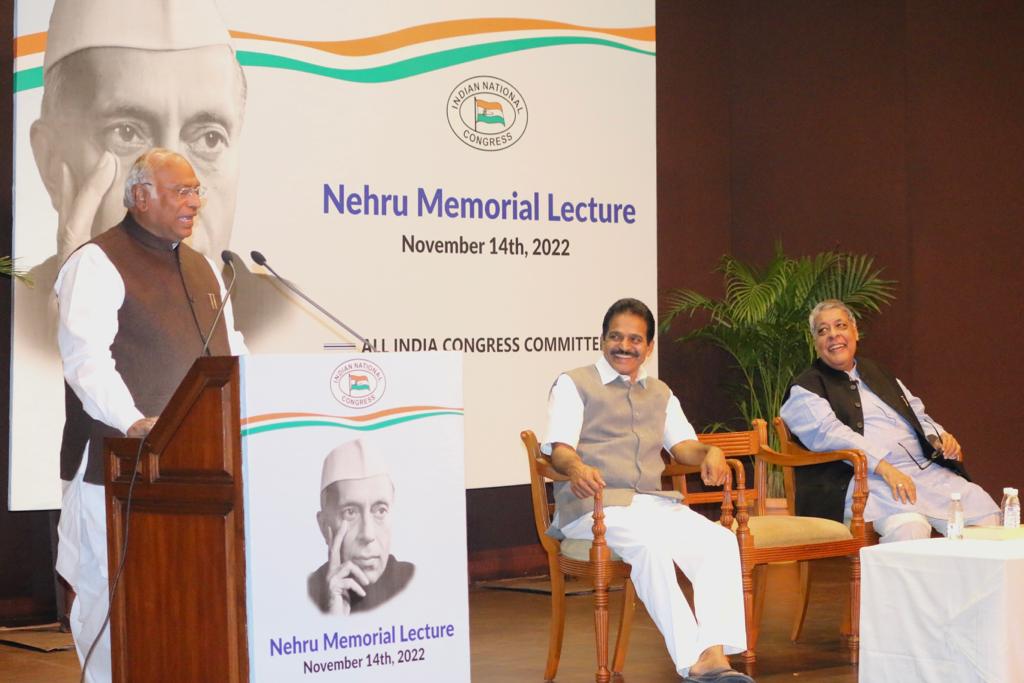 NEW DELHI: Congress president Mallikarjun Kharge accused the BJP-led Centre on Monday of not acknowledging the development witnessed under the previous dispensations and following a policy of “changing names”, instead of focusing on work.

The government is “not a democratic one” and is following a policy of “divide and rule”, Kharge alleged in his remarks at the Nehru Memorial Lecture that was delivered by leading academic Purushottam Agrawal at the Jawahar Bhawan here.

“Earlier, the Nehru Memorial Lecture used to happen at (the) Teen Murti (Bhavan) where his (Nehru’s) views and ideas were put forward. But this government is not even allowing giving place there for putting forward Nehru’s ideas,” he said.

The Congress president also accused the ruling Bharatiya Janata Party (BJP) of trying to appropriate Sardar Vallabhbhai Patel and pointed out that he was a Congressman. “If you consider him your own, also follow his principles,” he said, hitting out at the saffron party.

Kharge said Prime Minister Narendra Modi often asks what happened in the country in the last 70 years and added that the answer to that lies in the figures of life expectancy, economy, irrigation projects and dams.

“Their (BJP’s) work is to divide and rule, and that is why (Congress leader) Rahul Gandhi has undertaken the Bharat Jodo Yatra,” he said.

Kharge also slammed the prime minister for his remarks that he receives “two-three kg” of abuses daily and accused the BJP of misleading people.

He said people have started realising this and are ascertaining facts themselves.

Taking on the prime minister on the issue of unemployment, the Congress chief said according to the answers given by the Centre in Parliament, there are 30 lakh vacancies in the central government, aided institutions and schools, while Modi is distributing only 75,000 appointment letters.

“They have changed the Planning Commission’s name to NITI Aayog. There is no ‘niti’ (policy) so what is the ‘aayog’ for? They believe in changing names. Do some work and then change names,” he said.

The prime minister flagged off the inaugural special of south India’s first Vande Bharat Express at the Krantiveera Sangolli railway station in Bengaluru on Friday.

The train connects Mysuru and Chennai via Bengaluru. This is the fifth Vande Bharat Express train.

“The proposition sent by Maharaja Hari Singh in July was not for accession but for standstill. He had sent the proposal for a standstill not only to India but also to Pakistan,” he said.

“In an effort to troll Nehru, you have forgotten the difference between standstill and accession. This is not good. The Kashmir policy of Nehru was not his but his government’s policy,” he said.

If Nehru’s handling of the issue was so wrong, why did none of his illustrious colleagues resign from the cabinet, Agrawal asked.

“Why did Dr S P Mukherjee himself not resign in protest?” he asked.

Debates will and must go on, and there is no need to copy Nehru’s policies, Agrawal said.

He said “our times are indeed post-truth times” and anyone can claim his or her own alternative facts.

Such a post-truth disregard for facts and rational discourses is preparation for fascism, he added.

“The US realised to its horror on January 6, 2021 (when armed supporters of former president Donald Trump stormed the Capitol), post-truth is pre-fascism.

“Pre-fascism does not take much time in turning into full-fledged fascism. The struggle against such a possibility is a moral duty of every right-thinking human being and Nehru is a perennial source of wisdom and inspiration for such a struggle. No wonder all forms of fascism fear and hate Nehru so intensely,” Agrawal said.

“Was it a mean achievement? That too going along with a robust democracy in which the critics of the prime minister were not denounced as anti-nationals and the prime minister did not describe abuses as his staple diet,” Agrawal said.

“The Nehruvian idea of the economy was a holistic one, health and education were considered as the State’s duty, not a burden,” he added.