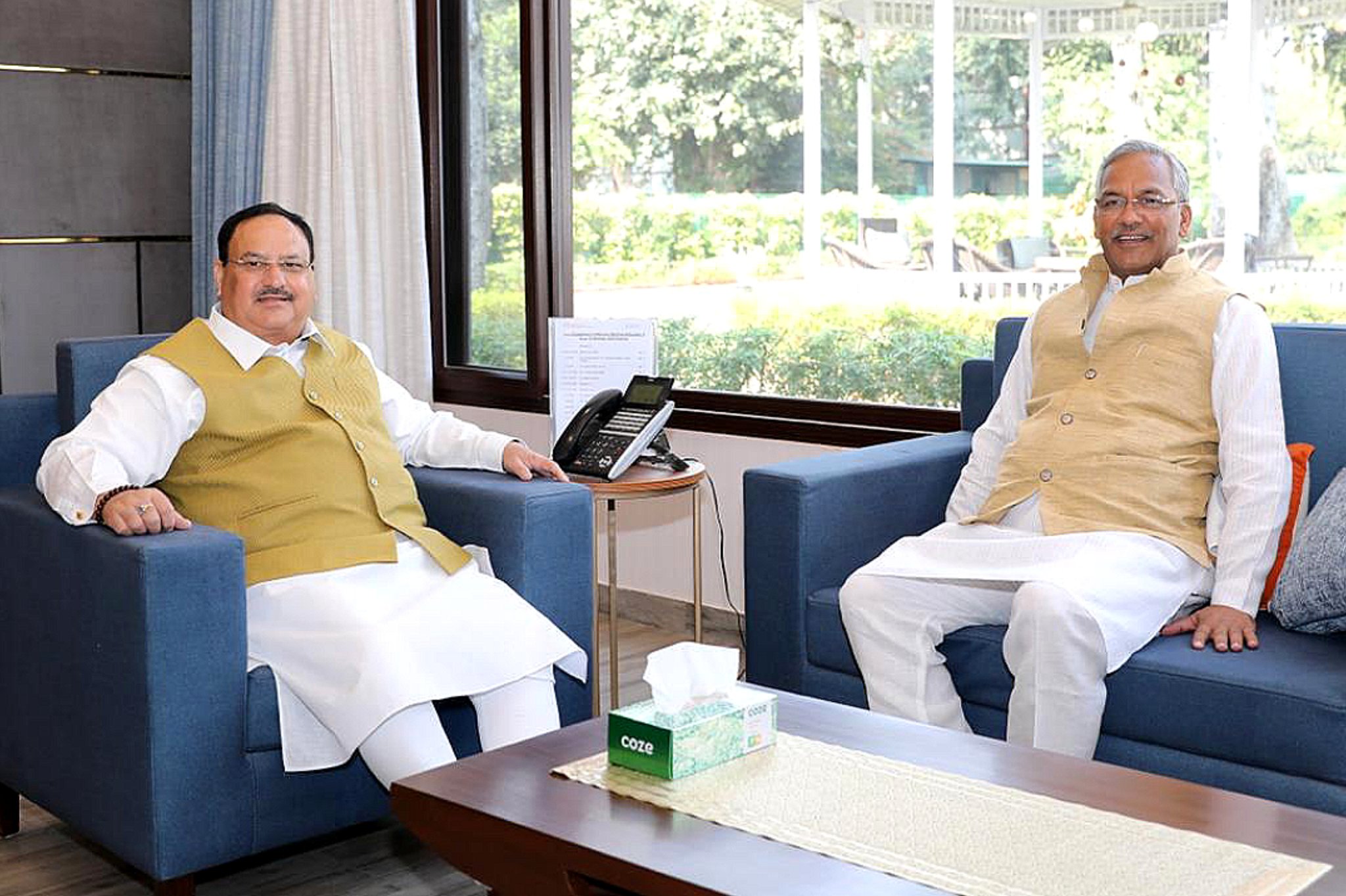 Trivendra Singh Rawat shared a picture of his meeting with Nadda on social media on Thursday.

The sources said the BJP leadership issued a ”stern message” to leaders in Uttarakhand and asked them to air their grievances only on party forums.

BJP MP Tirath Singh Rawat, who had hit the headlines after alleging that ”commission-khori” continued in Uttarakhand, is also likely to meet the party’s central leadership to explain his remarks, they said.

On Sunday, an undated video of Tirath Singh Rawat where the former chief minister can be heard saying that one cannot get anything done in Uttarakhand without paying a ”commission” went viral on social media.

The practice was prevalent in undivided Uttar Pradesh and it continues in Uttarakhand even after the hill state was carved out, he can be heard as saying. However, he was also heard saying no one in particular could be held responsible for the practice. ”It is a mentality. It will go away only when we begin to look upon our state as our own family,” he said. Recent remarks by his predecessor Trivendra Singh Rawat about the progress of works under the Smart City project also irked the BJP leadership.

Referring to his tenure as chief minister, Trivendra Singh Rawat had said, ”Work on the Smart City project was going very well. In three years, it had jumped from 99th position to 9th. Unfortunately, the pace slowed and now everyone has complaints about the way it is going. It is a matter of concern.” ”Smart City project CEOs should not be changed again and again. Every new CEO blames the previous one for whatever goes wrong in implementation of the project. This is not a solution,” he said.

The remarks of two former chief ministers made BJP leaders ill at ease as they showed things in the party-governed state in a bad light. With their remarks hitting headlines, the party’s central leadership summoned BJP’s Uttarakhand unit chief Mahendra Bhatt to Delhi. Just a day after Bhatt’s visit, Trivendra Singh Rawat met Nadda in the national capital to offer his explanation. Though the purpose of the meeting was stated to be a discussion on issues related to the state in general, party sources said the former chief minister met Nadda to explain his stand.

The leadership has conveyed to its leaders to raise their grievances before the chief minister, the state organisation or the national president, the sources said. Public statements like this weaken the morale of party activists with Lok Sabha elections just one-and-a-half years away, the leadership is understood to have told its Uttarakhand leaders.

The remarks have provided fresh ammunition to the opposition Congress. ”The ‘commission-khori’ statement by a former BJP chief minister is an admission of how corruption has thrived in the state,” the Congress’ Uttarakhand unit vice-president Suryakant Dhasmana said.