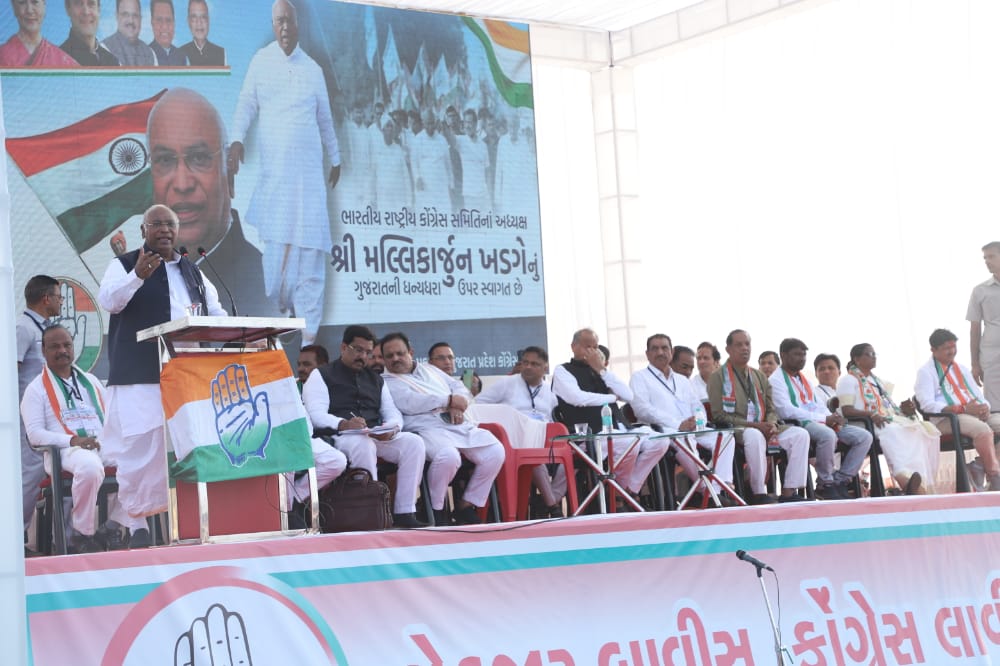 Addressing a rally in Kheda in poll-bound Gujarat on Sunday, the prime minister had said Congress views terrorism from the prism of the vote bank”. He also said, ”terrorism was not over yet and the politics of the Congress has also not changed”.

”Here (in Congress), we have lost our two famous and world-respected prime ministers to strengthen and unite the country. This is an election of the state Assembly and not of Parliament. We are here before you with the issues affecting the state. It is better if he (Modi) talks about the successes and failures of the state,” Kharge said.

On the BJP’s poll promise of implementing the Uniform Civil Code in Gujarat, Khrage said it was an attempt to divide society and create controversy for votes.

”They (BJP) are provoking Congress and other leaders to speak up and get angry. Their aim is to provoke us and divide society, but we are not going to fall into their trap,” he said.

Slamming Modi for seeking votes in his name and claiming only he contributed to the progress of Gujarat as if there were no leaders before him, Kharge said the prime minister keeps talking about the Congress has done nothing in the past 70-odd years.

”If any party built the country in 70 years, it was Congress,” Kharge said, adding, unlike Modi, he does not take credit for the several thousand crore worths of projects sanctioned when he was Union minister.

Attacking the BJP’s ‘Gujarat model’ of development, the Congress president said there were five lakh vacancies in government departments, including that of 28,000 teachers.

”The state’s debt is rising sharply. When we went out of power, we left a debt of Rs 10,000 crore. Today it has swelled to Rs 3.40 lakh crore, and is going to increase further to Rs 4.60 lakh crore during the current fiscal,” Kharge said.

”The so-called ”Gujarat model” is about 4 lakh COVID-19 deaths. They changed three chief ministers in six years. If you change three CMs, it means that you did nothing here. Otherwise, there was no reason to change them,” Kharge said.

He expressed confidence in Congress winning the Gujarat elections.

”The BJP has understood the people of Gujarat are deciding in favour of Congress. Despite being in power for 27 years, it has become necessary for the BJP to bring in the prime minister, Union home minister, four to five chief ministers to make inflammatory speeches to mislead people,” he claimed. Gujarat will see two-phase Assembly polls on December 1 and 5, and the counting of votes will take place on December 8. In the 2017 Assembly polls, the Congress had won 77 seats in the 182-member Assembly restricting BJP to 99.