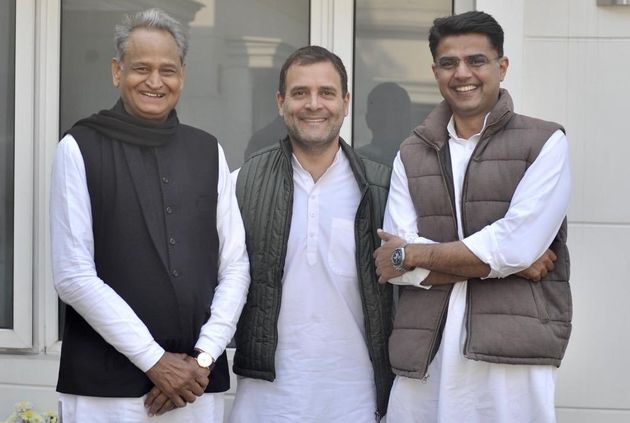 INDORE: Amid the power tussle between Rajasthan Chief Minister Ashok Gehlot and his former deputy Sachin Pilot, Congress MP Rahul Gandhi on Monday said both the leaders are assets to the party.

Addressing a press conference near Indore, Gandhi, the Lok Sabha member from Wayanad in Kerala, also said the decision to contest again from Amethi would be taken after one or one-and-a-half years.

”At present, my focus is on the Bharat Jodo Yatra,” he said.

To a query on different statements being given by Rajasthan leaders Gehlot and Pilot amid their power tussle, he said, ”It will not affect the yatra and both the leaders are assets to the Congress party.” Gehlot on Thursday told NDTV that Pilot is a ‘gaddar’ (traitor) who cannot replace him as he had revolted against Congress in 2020 and tried to topple the state government, drawing a sharp response from his former deputy who said such ”mud-slinging” would not help.

Some reporters also asked Gandhi whether he would like to contest again from Amethi if given an opportunity, as the road to power in Delhi goes via Uttar Pradesh and Prime Minister Narendra Modi also contested from Varanasi in UP. To this, Gandhi said, ”I don’t want to give any headline to the media as at present my focus is on the Bharat Jodo Yatra.” ”See, once again these are all attempts to distract from the main idea. You want newspapers to say tomorrow whether I will contest from Amethi or not,” Gandhi said.

”I want the newspapers to write about the Bharat Jodo Yatra, the ideas and philosophy behind the yatra,” he said.

”The answer to your question will come may be in a year or year-and-a-half,” he said.

To a query on plans for solving the unemployment problem in the country, Gandhi said the main problem at present is that the entire wealth of the nation is confined in the hands of three-four industrialists.

The Congress will focus on creating small scale enterprises to generate more employment opportunities in the country, he said.

”I want the government to participate in education and health care and pump in more money in these sectors,” Gandhi said.

The government should sense the voice of the people, he added.

Gandhi also said his ongoing Bharat Jodo Yatra, a mass contact initiative, was raising the voice of the nation.

He claimed the Bharatiya Janata Party (BJP) and the Rashtriya Swayamsevak Sangh (RSS) were not hearing the voice of the public and running the country by their ”rigid structure”.

The country should be run by the people’s sentiments, he said.

On attacks over his attire and looks during the yatra, Gandhi said, ”The problem with the BJP is that its spends thousands of crore to tarnish my image. But, the amount of money it would spend on tarnishing my image, I would get the same amount of strength as truth cannot be hidden.” ”Personal attacks come as you fight against a big power…this shows that I am on the right path. The BJP’s personal attacks on me are my guru, which have taught me the right path, he said.

”I am gradually understanding the ideology of the BJP and the RSS,” he said.

On the issue of Uniform Civil Code, he said, “Our direction is clear and their (BJP) direction is clear, and we are doing our work.” Gandhi also said he had made a detailed planning of the yatra earlier. But it did not materialise due to the COVID-19 pandemic and other reasons, he added.