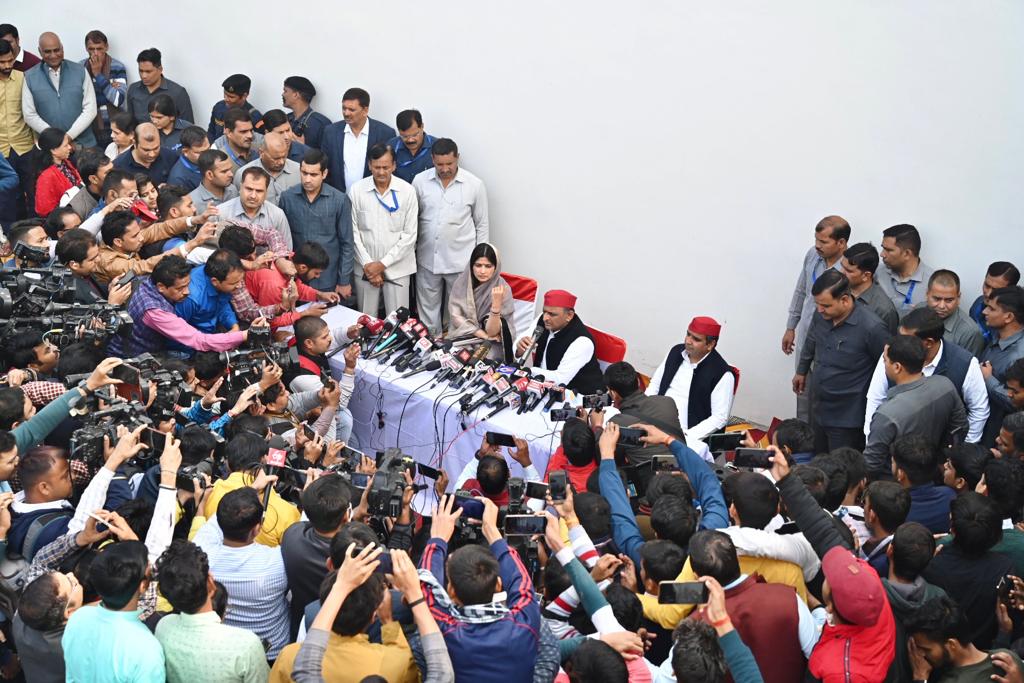 LUCKNOW: The Samajwadi Party on Wednesday appealed to the country’s constitutional institutions, including the Election Commission of India, to conduct an inquiry into the ”murder of democracy” by the administration during the Assembly bypolls in Rampur Sadar.

Manoj Pandey, the Samajwadi Party (SP) chief whip in the Uttar Pradesh Assembly, alleged that the government exceeded ”all limits” during Monday’s bypoll.

The way voters of a particular religion and class were prevented from voting with the help of the police is equivalent to the murder of democracy, Pandey said during a press conference at the party headquarters here.

”We appeal to all the constitutional institutions, including the Election Commission (of India), to investigate the excesses (of power) during the Rampur bye-election by taking suo motu cognisance because this matter is not about any person but the protection of democracy.” Purported videos of alleged police excess in Rampur Sadar were also played by Pandey. Presenting the voter turnout figures at Khet Qalandar Khan, Haji Nagar, Hamid Inter College and Alinagar polling stations, he said only 9-per cent votes were cast in these booths because the administration ”stopped” the voters. Except for the Lok Sabha bypoll in June, the polling percentage in the Rampur Sadar Assembly segment has never fallen below 58 per cent, he said.

The right to vote is the biggest in a democracy and the government has snatched it. Those demanding fair elections in Rampur Sadar were beaten severely with sticks, he said.

When asked if the SP would take the issue to court, Pandey said, ”We still have faith in the Election Commission (of India) to investigate all these facts and take necessary action.” The bypoll in Rampur Sadar was necessitated by the disqualification of Azam Khan as MLA following his conviction in a hate speech case last month. Polling was sluggish in Rampur Sadar with the segment registering around 33.94 per cent turnout by 6 pm.

In comparison, the turnout at the segment during the Lok Sabha bypolls in June was 41 per cent while 56.35 per cent voted during the 2022 Assembly elections earlier this year.

On Monday, the party’s state unit chief Naresh Uttam Patel, spokesperson Rajendra Chaudhary, Pandey and other leaders met Chief Electoral Officer Ajay Kumar Shukla in Lucknow and submitted a memorandum alleging rigging by the administration and the police in all three bypolls.

Bypolls were also held for the Mainpuri parliamentary constituency and the Khatauli Assembly segment on Monday.

On the low turnout in Rampur Sadar, which has a sizeable Muslim population, Azam Khan’s family members alleged that police threatened, harassed and stopped people from voting.

The state government has denied these charges.

Pandey also questioned the conclusion of the Assembly’s Winter Session after two days instead of the three days stipulated earlier, saying the government didn’t want to discuss important issues related to the public. So, under a conspiracy, the session was reduced to two days, he said.

The SP leader said nine months after formation of the state government, various Assembly committees were still to be formed and alleged that it showed the ruling dispensation’s insensitivity towards people’s issues.

Referring to the case filed against SP’s Sisamau (in Kanpur) MLA Irfan Solanki for allegedly burning a woman’s house, Pandey said it was related to a dispute between her and the Kanpur Development Authority. However, the government is deliberately targeting people from the Opposition, he alleged.