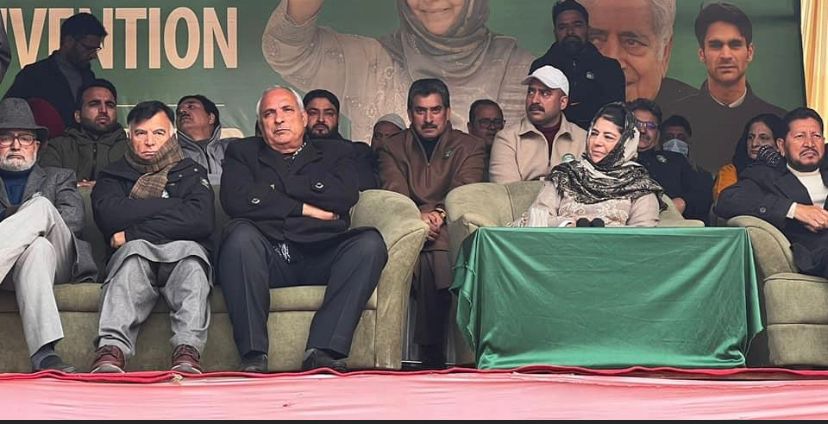 SRINAGAR: Though the 2018 local body elections in Jammu and Kashmir were a success, the panchayat system cannot replace an elected government, the Peoples Democratic Party (PDP) has said.

The former chief minister Mehbooba Mufti-led party made these remarks in its monthly newsletter ‘Speak Up’, amidst demands by the mainstream political parties in Jammu and Kashmir for conducting assembly polls in the union territory.

”The Supreme Court recently reserved its judgment on delimitation and GOI’s justification for early delimitation was that they wanted to give Kashmiris ‘immediate democracy’.

”The panchayat elections were a success but a panchayat cannot replace an elected government. Democracy can never be instant or immediate because it is a process that goes beyond polling day,” the party said.

The PDP as well as the National Conference had boycotted the local body polls, seeking a guarantee from the Centre over the protection of Jammu and Kashmir’s special status under Article 370 of the Constitution. However, the government revoked Jammu and Kashmir’s special status and divided the erstwhile state into two union territories on August 5, 2019.

Both the parties have since asserted that boycotting the polls was a huge mistake as they ceded space to the BJP and other parties.

The newsletter claimed that since the abrogation of Article 370, the ”atrocities” on Kashmiris have crossed all limits.

”Since the abrogation (of Article 370), Kashmiris have seen nothing but strife. In some ways, the constant lockdowns and never-ending communication blackouts inoculated us to the Covid lockdowns that came next.

”While people elsewhere were complaining about boredom and loneliness, Kashmiris were for the most part silent,” it said.

However hard the circumstances are, Kashmiris have learnt to make do, the newsletter said.

”The dystopian nightmare of these past few years has devastated us, but it has also made us anti-fragile. Since ancient times, people have been fortifying themselves with small doses of toxins to achieve hormesis.

”It really makes you wonder if we’ve undergone a societal hormesis of some kind that enabled J-K to survive the worst circumstances that would have brought any other state to its knees,” it said.

Although adversity in small doses can be beneficial to achieve robustness, ”it doesn’t change the fact that we are being poisoned, slowly and steadily, one deadly measure at a time, be it our economy, industry, press, education or our civil society”, the PDP said.

”So many of our mainstream politicians, press, activists and other prominent civil society members have been jailed or exiled as terrorist sympathisers. Our young men are being butchered for being hybrid militants without any due diligence to prove these charges,” it said.

After National Investigation Agency and Enforcement Directorate, the newsletter alleged, Kashmiri businessmen are now facing the onslaught of raids by the Income Tax department.

”It’s interesting to note that when our horticulture industry needed intervention, GOI couldn’t be bothered to rouse from their slumber. But the opportunity to harass Kashmiri entrepreneurs has invoked a feverish enthusiasm, bringing together the security apparatus and government agencies, working in unison like a well-oiled machine with a voracious appetite for destruction,” it said.

In this article:Panchayat system, PDP