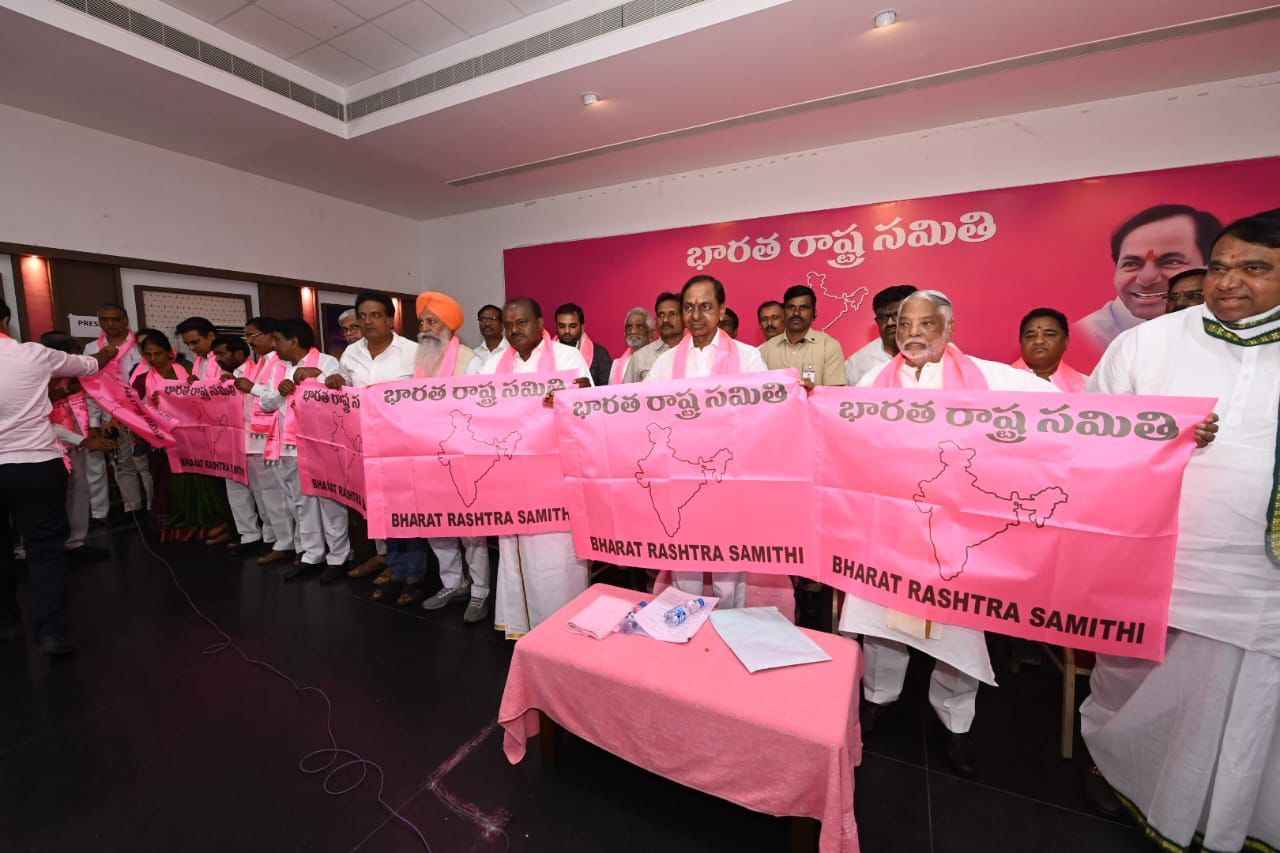 HYDERABAD: With the Election Commission approving the name change of TRS as Bharat Rashtra Samiti, party president and Telangana Chief Minister K Chandrasekhar Rao on Friday formally hoisted the pink colour flag of BRS and exuded confidence that the ”pink flag would fly high on the Red Fort one day”.

Addressing party leaders after unveiling the BRS flag at the party headquarters here, he gave the slogan of ‘Ab ki baar kisan sarkar’ (farmers’ government this time) and said new economic, environment, water, electricity and women empowerment policies are needed in the country.

The slogan is similar to that of the BJP’s catchy ‘Ab ki baar, Modi sarkar’ that was used during the 2014 general elections.

Rao, who said the BRS has been launched to bring about a transformation in various sectors in the country, said its office in Delhi would be opened on December 14.

Indicating his ambition of assuming power in future at the Centre, Rao said: ”Hundred per cent, I have self-confidence. It is certain that the pink flag would fly high on Delhi’s Red Fort.” Farmers constitute 40 per cent in the country’s population and they are in distress, he said while exhorting the slogan of ‘Ab ki bar kisan sarkar’.

Thanking Kumaraswamy who was present on the occasion, Rao wished to see the JD(S) leader become the Chief Minister of the neighbouring state again and assured his party’s support to him.

Claiming that the system of tribunals to address inter-state water issues that go on for years with the Centre watching the ‘tamasha’ should stop, he said the BRS would come out with a ‘new water policy’ in the country.

Citing the sharp decline in value of rupee, dwindling foreign exchange reserves and others, he said the country needs to draft a new economic policy.

The Chief Minister said a new power policy would be drafted for the country as there is power shortage in the country in spite of the availability of vast resources.

He favoured a new ‘weaker section upliftment policy’ in the country to improve the lot of the downtrodden and also a ‘new women empowerment policy’.

All these policy documents would be put before the people of the country in the coming few weeks, Rao said.

Earlier, he signed on the papers concerned about the name change of TRS as BRS at 1.20 pm, an auspicious time.

The BRS flag unveiled by Rao contained the country’s map in it and the colour of the party flag continued to be pink. The TRS flag was also adorned in pink.

Before unveiling the BRS flag, Rao attended a puja.

Rao received a communication from the Election Commission on Thursday approving the change of name to BRS.

Seeking to expand its electoral footprint beyond Telangana, the TRS in October changed its name as BRS.

Rao, also know popularly as KCR, had formed the TRS in 2001 to fight for the formation of a separate state Telangana out of undivided Andhra Pradesh.

TRS MLC K Kavitha, the Chief Minister’s daughter, said the launch of BRS has opened the doors for inclusive and development driven politics in the country.

”The beginning of a new dawn in the political discourse of India. The launch of BRS Party by our leader, Hon’ble CM KCR Garu has opened the doors for inclusive, united and development driven politics of vision for every single Indian,” she said in a statement.

”We have delivered on hopes and aspirations in Telangana, we are committed to give every Indian the courage to dream and the hope of making their dreams come true,” she said.