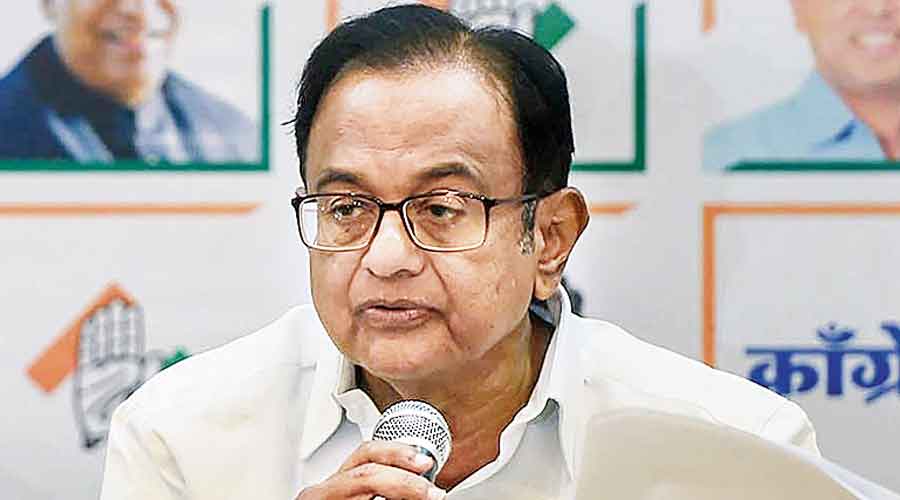 NEW DELHI: The Congress is best placed to be the “pole” around which a non-BJP front can be built for the 2024 general elections, senior party leader P Chidambaram said on Sunday and asserted that the Aam Aadmi Party does not have much appeal outside Delhi with the exception of Haryana and Punjab.

Chidambaram also stressed that there were lessons to be learnt by the Congress from the Gujarat loss, saying there is no such thing as a “silent” campaign in a hard-fought election.

In an interview with PTI, he also said the Aam Aadmi Party (AAP) played spoiler in Gujarat, like it did earlier in Goa and Uttarakhand.

He weighed in on the recent elections in Gujarat, Himachal Pradesh assemblies and the Municipal Corporation of Delhi, saying Prime Minister Narendra Modi should reflect on the fact that the BJP was in power in all three but was defeated in two.

“That is a huge setback for the BJP. The win in Gujarat, important as it is, cannot hide the fact that the BJP, the incumbent, was defeated decisively in Himachal Pradesh and MCD,” the former Union minister said.

The Congress in Himachal and the AAP in MCD polls won by a decisive margin of seats, he pointed out.

“The overall margin of votes in Himachal Pradesh may be small, but it was not a state-wide presidential kind of election. It was a constituency-wise election and we have to look at the margin in each constituency,” he said.

“In many of the 40 constituencies won by the Congress, the margins were sizable. A state-wide margin is an inappropriate measure in a constituency-wise election,” Chidambaram said when asked about the PM highlighting the less than one per cent vote share difference between the Congress and the BJP in Himachal.

Asked about the Congress’ debacle in Gujarat and the low key campaign in the state, Chidambaram said he was not fully acquainted with the strategy, if any, followed in the state.

“My sense was the Congress did not have great expectations in Gujarat. As a general rule, I believe that in every election the party must put its best forward and throw into the battle all the available resources – human, material and digital,” he said.

The Gujarat Pradesh Congress Committee ought to have mobilised the best human resources available in the Congress all over the country and deployed them in the campaign, he said.

“I also believe that there is no such thing as a ‘silent’ campaign in a hard-fought election. There are lessons to be learnt from the Gujarat loss,” he said.

On whether the AAP would pose a challenge to the Congress’ leadership of the Opposition block after winning MCD polls and bagging about 13 per cent of the vote share in Gujarat, Chidambaram said the AAP’s win in the MCD election was not surprising as it is the ruling party in Delhi.

The BJP carried the burden of 15 years of incumbency in the MCD and the Congress was not a serious contender, he opined.

“However, in Gujarat, the AAP played the spoiler’s role, like it did earlier in Goa and Uttarakhand. The AAP dented the chances of the Congress in 33 seats in Gujarat,” Chidambaram said.

“I do not think the AAP has much appeal outside Delhi except perhaps (in) Haryana and Punjab. As the AAP travels further from Delhi, it will find that its appeal diminishes,” he said.

Whether the AAP has qualified for the label of ‘national’ party or not, is of little significance, he added.

Asked whether the Congress still remains the fulcrum of the Opposition alliance to take on the BJP in 2024 polls, Chidambaram said, “Yes, the Congress is best placed to be the pole around which a non-BJP front can be built.”

On the poll results and their implications for the road to 2024 general elections, he said that before 2024, there is 2023 and elections in several states, including Karnataka, Rajasthan, Madhya Pradesh and Chhattisgarh.

“How well the BJP will do and how well the Congress and other non-BJP parties will do in the state elections will undoubtedly play a major role in determining the outcome of the Lok Sabha elections,” Chidambaram opined.

“Its goals were larger and with a long time view. I did not expect the BJY to influence the election in a state that the Bharat Jodo Yatra did not traverse. What impact it may have in the states that it traversed remains to be seen,” Chidambaram said.

In Gujarat assembly polls, the BJP won a record 156 seats with a staggering 52.5 per cent vote share, dwarfing the Opposition Congress and the AAP, that got over 27 per cent and about 13 per cent vote share respectively. The Congress got just 17 seats while the AAP managed to bag five. Independents won three seats and the Samajwadi Party picked up one.

In Himachal Pradesh, the Congress won 40 seats and a vote share of 43.9 per cent. The BJP won 25 with 43 per cent vote share and on three seats independents were victorious.