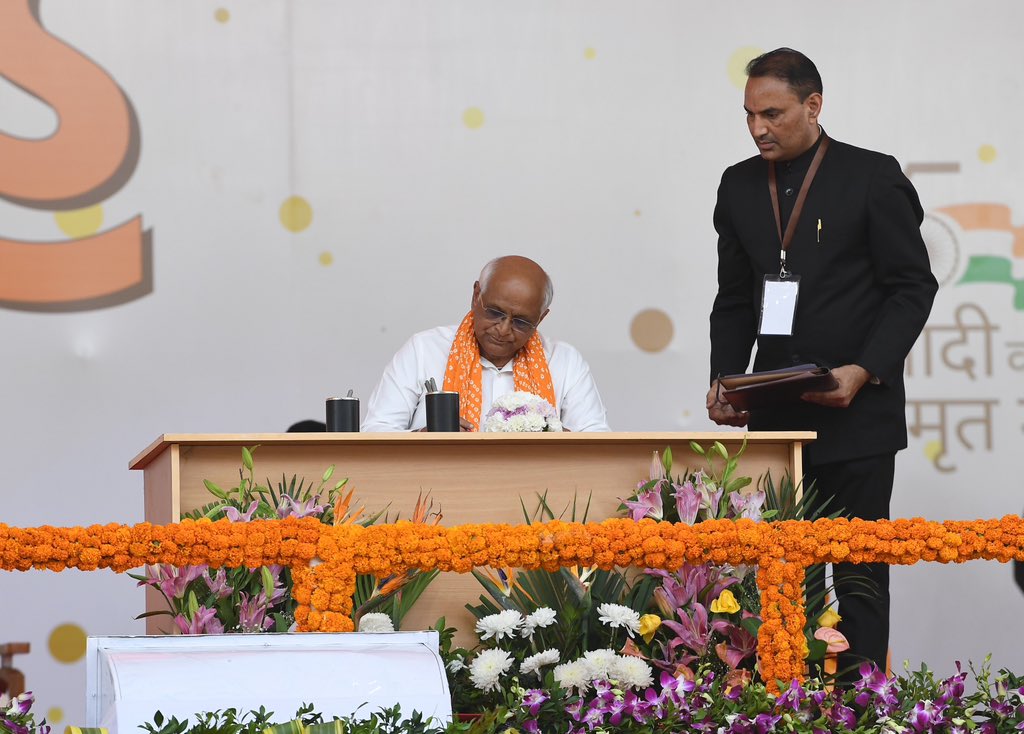 AHMEDABAD: Bharatiya Janata Party (BJP) leader Bhupendra Patel on Monday took oath as the Chief Minister of Gujarat for a second straight term at a star-studded ceremony in Gandhinagar along with a 16-member Council of Ministers, which included one woman, four days after the saffron outfit stormed to power in the state with a historic mandate.

Patel (60) was administered the oath as the 18th Chief Minister by Governor Acharya Devvrat at a grand ceremony attended by Prime Minister Narendra Modi, Home Minister Amit Shah, several members of the Union Cabinet and chief ministers of BJP-ruled states at the Helipad Ground near the new Secretariat here.

Sixteen other ministers, eight of them of cabinet rank — the new ministerial team has representation from Patidar, Koli, tribal and Dalit communities — were also sworn-in after the BJP on December 8 won seventh straight term in office in Gujarat with victory in a record 156 Assembly constituencies in the 182-member House. The Congress was relegated to a distant second spot with 17 seats, while the Aam Aadmi Party (AAP) finished third with win in five segments.

The new entrants include 11 former ministers.

The Council of Ministers has only one woman member – Bhauben Babariya – who was elected from the Rajkot Rural (Schedule Castes) Assembly seat. She has been cabinet rank.

Harsh Sanghavi and Jagdish Vishwakarma were sworn in as ministers of state (MoS) with an independent charge. Sanghavi was Minister of State for Home in the earlier Bhupendra Patel government.

Of these 16 ministers, four belong to the Koli community (Bavaliya, Khabad, Solnaki and Mukesh Patel), three are Patidars (Raghavji, Rishikesh and Praful), three OBCs (Vishwakarma, Parmar and Bera) and two are tribals (Halpati and Dindor).

Sanghavi is a Jain, Desai a Brahmin, while Rajput belong to the Kshatriya community.

Prime Minister Modi, who addressed nearly three dozen campaign rallies across the state, and is widely credited for the BJP’s stellar poll performance, congratulated CM Patel and his new team in a tweet.

”Congratulations to Shri Bhupendrabhai Patel on taking oath as CM of Gujarat. I would like to also congratulate all those who took oath as Ministers. This is an energetic team which will take Gujarat to even newer heights of progress” the PM tweeted after the ceremony.

Of the 11 former ministers who were inducted into Bhupendra Patel’s new team, seven were part of the government led by him from September 2021 to December 2022. They are Sanghavi, Jagdish Vishwakarma, Kanubhai Desai, Rushikesh Patel, Raghavji Patel, Kuber Dindor and Mukesh Patel.

Four others – Solanki, Bera, Khabad, and Bavaliya – had served as ministers in previous BJP governments.

Prominent among those who have been dropped from the first Bhupendra Patel ministry were Jitu Vaghani, Purnesh Modi and Kiritsinh Rana.

Key ruling party MLAs like Alpesh Thakor, Hardik Patel and Rivaba Jadeja – who were expecting a place in the Council of Ministers – were ignored but can hope to get portfolios in a future cabinet expansion.

Former chief minister and senior BJP leader Vijay Rupani said, “The cabinet will be expanded later. This is how it is done when a new government comes in and more ministers are added during expansion.” As per norms, Gujarat, which has a 182-member Assembly, can have maximum 27 ministers, or 15 per cent of total strength of the House. Currently, it has a 17-member Council of Ministers, including the CM.

Bhupendra Patel resigned as chief minister along with his entire cabinet on Friday to pave the way for the formation of a new government following the election results. The Assembly polls were held on December 1 and 5, and results were announced on December 8.

He was elected as the leader of the BJP legislature party on Saturday, following which he met the governor and staked claim to form the next government. Patel won the Ghatlodia Assembly seat in Ahmedabad with a record margin of 1.92 lakh votes.

A low-profile BJP leader and the first politician from the Kadva Patidar sub-group to become CM, Patel replaced Vijay Rupani in the top post in September 2021.