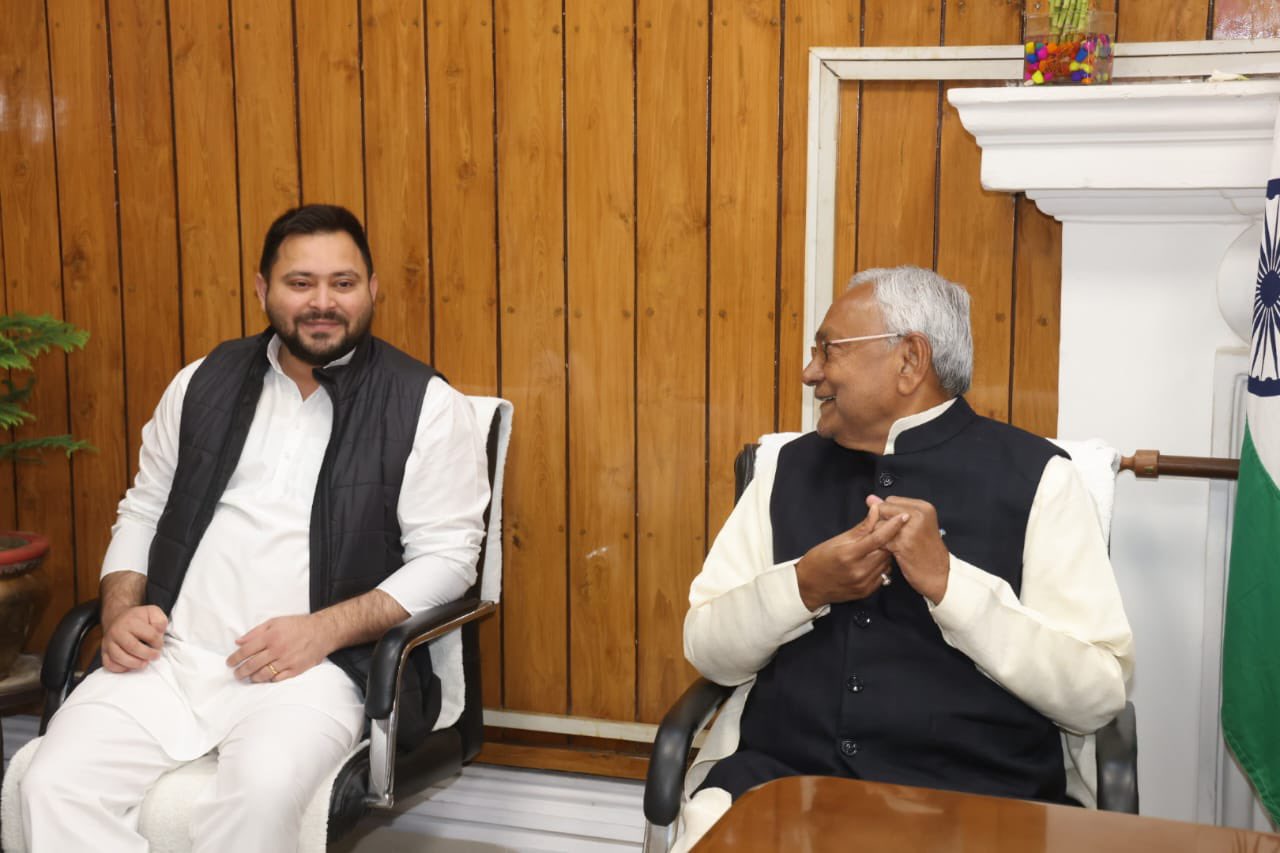 PATNA: Bihar Chief Minister Nitish Kumar on Tuesday dropped further hints that he was looking forward to passing on the mantle to his young deputy Tejashwi Yadav, leaders emerging from a meeting of legislators of the ruling ‘Mahagathbandhan’ said.

The septuagenarian JD(U) supremo, once again, ruled himself out as a prime ministerial candidate for the next Lok Sabha polls even as he maintained that a ”united opposition” could defeat the Narendra Modi-led BJP in 2024.

”The chief minister pointed towards Tejashwi ji and said he is the leader of the future, under whose leadership the 2025 assembly polls in the state would be fought,” said Mahboob Alam, the legislature party leader of the CPI(ML) Liberation which supports the government from outside.

He also said ”we are of the view that it will benefit the grand alliance which is fighting the communal forces represented by the BJP. Tejashwi ji is a young and energetic leader”.

Notably, Yadav, the younger son of RJD’s founding president Lalu Prasad, had steered the ‘Mahagathbandhan’, which then did not have the chief minister on its side, to an impressive electoral performance in 2020 assembly polls in which the NDA could barely scrape through.

After dumping the BJP in August this year, Kumar, whose love-hate relationship with Lalu Prasad is the stuff of legend, had been asserting that he was done with the long association that he has had with the saffron party.

”The chief minister has been saying, for quite a while, that the future belongs to Tejashwi ji and youngsters like him. He had said so yesterday in Nalanda where I, too, was present. He said it again today,” said Vijay Kumar Chaudhary, one of the closest aides of Kumar, who also holds key portfolios in the state cabinet.

Chaudhary was referring to Kumar’s speech on the previous day when the latter had inaugurated a dental hospital in his home district and spoken about backing Tejashwi Yadav.

Yadav, however, showed characteristic composure when approached for comments by journalists.

”At present, we are running the government together. And we need to concentrate on the principal challenge before us, and that is the 2024 Lok Sabha polls,” said Yadav.

Chaudhary also said that at the legislators’ meet, Kumar ”made it clear again that he was not in the race for prime ministership. But he still feels the BJP can be defeated in 2024 if the opposition stands united. And he will continue to work in that direction”.

Meanwhile, the BJP, which has been sore over the loss of power it suffered as a result of the upheaval in August this year, sought to drive a wedge between Kumar and the RJD.

”If Nitish Kumar wants to make someone his successor, he should show the moral courage to actually hand over power. He will not be able to do so because it would lead to a revolt in the JD(U). His party men are already upset over Tejashwi running the show through remote control,” said Nitin Nabin, BJP MLA and former minister.

Another former BJP minister Jibesh Kumar raked up the installation as CM of Jitan Ram Manjhi, and unceremonious removal thereafter, by Kumar and asserted, ”Nitish Kumar is not someone who can stay without power. He is only hoodwinking Tejashwi. Take it from me in writing.’