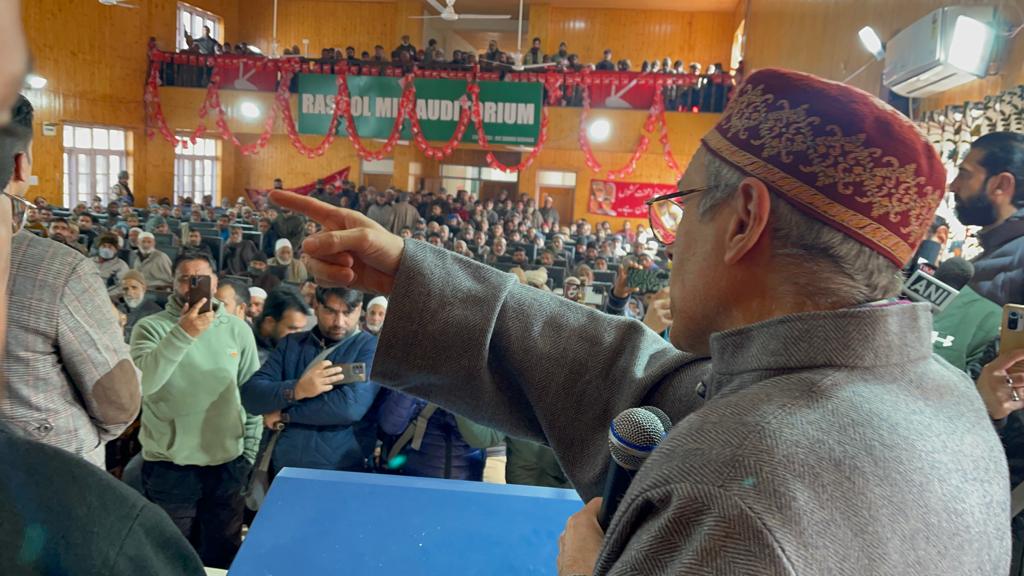 SRINAGAR: Former Jammu and Kashmir chief minister Omar Abdullah on Tuesday said the National Conference will repeal the controversial Public Safety Act (PSA) if it forms the government in the Union Territory after the Assembly elections.

He also termed as unfortunate the face-off between the armies of India and China in Arunachal Pradesh and said the two countries should work together to improve their relations.

“They (Centre) have only kept those (old) laws here which can be used to harass people. There is no (Pu

blic) Safety Act anywhere in the country…it is only in Jammu and Kashmir. I have said it earlier and I repeat when the National Conference government comes, on the first day, this law will be repealed,” Abdullah told party workers at Dooru in Anantnag district.

The PSA was first enacted by the then J-K government headed by National Conference founder Sheikh Mohammad Abdullah in 1978 to curb timber smuggling. The law, which provides for detention of up to two years without trial, was later used against terrorists and separatists after the eruption of militancy in Jammu and Kashmir in 1990.

My leader @OmarAbdullah thundered in Dooru today saying the day JKNC comes to power, it will repeal the draconian PSA. The meltdown by BJPs B teams in Kashmir on this statement is not only on expected lines but proof enough where there loyalties lie. #OmarSpeaks4JK #Halhihalhai pic.twitter.com/pkTB37DIkU

While the Centre did away with a large number of laws passed by the Jammu and Kashmir Assembly after the abrogation of Article 370 and the reorganisation of Jammu and Kashmir in 2019, the PSA was one of the few laws that were retained.

Abdullah said the abrogation of Article 370 will be an issue in the Assembly elections in Jammu and Kashmir, which will be held for the first time after the Centre’s August 2019 move. The schedule for the elections has not been announced yet.

“It is obvious that this election will not be contested merely on bijli, sadak, pani (electricity, roads and water). Whatever has happened since August 5, 2019 will be an issue in the elections. Let’s see what the people’s verdict is,” he added.

The former chief minister said his party will take every step to protect the identity and interests of the people of Jammu and Kashmir.

He accused the Centre of taking away the resources and jobs of local people by bringing outsiders in the Union territory.

“The mineral extraction contracts are given to outsiders…Even the postman who delivers letters will be brought in from other places. Our youth are not deemed fit for these jobs,” Abdullah claimed.

“I would have had no objection to these things but then they should take our youth and give them jobs in Haryana, Punjab, UP and other states. They should allow our contractors to do mining in Punjab. But they won’t do it,” he added.

Abdullah said a National Conference government will ensure that the land and the resources of Jammu and Kashmir are reserved for locals only.

On development, he lambasted the J-K administration alleging that it is not able to carry out even 10 per cent of the work that should have been done.

“During our time, we might have been able to get only 70 per cent of the work done, but this administration has failed to get even 10 per cent done,” he added.

On China-India tensions, Abdullah said the two countries should work together to improve their relations.

He, however, said China should also take responsibility for establishing good relations with India.

“We are not able to have good relations with our neighbouring countries. Everyone knows the status of our relations with Pakistan but the relations with China are also not working out. China has not completely gone back from Ladakh and now there are reports of a face-off in Arunachal Pradesh,” Abdullah told reporters at Dooru in Anantnag district.

He said the ‘Vajpayee policy’ on relations with neighbours would be ideal for India.

“I remember the words of (PM Atal Bihari) Vajpayee who used to say ‘we can change friends but not the neighbours’. We cannot change our neighbours but we can improve our relations with them,” Abdullah, who was a minister of state for external affairs in the Vajpayee government, said.

He said the onus also lies with China to improve its relations with India.

“It takes two to tango. China also has to take responsibility for establishing good relations with our country,” he added.