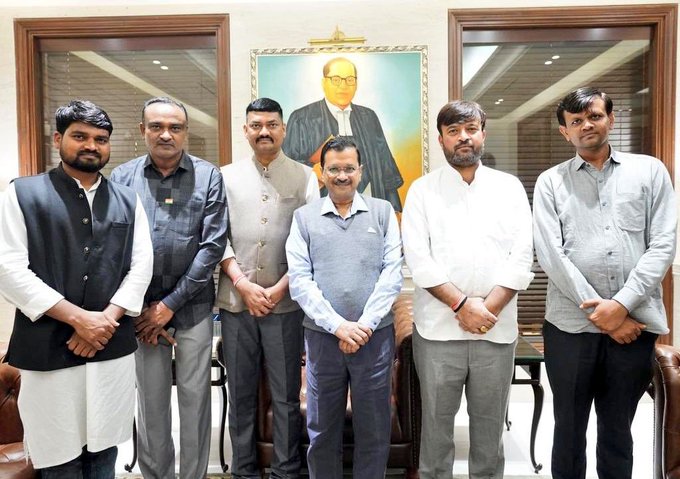 NEW DELHI: All five newly-elected AAP MLAs from Gujarat called on party’s national convenor and Delhi Chief Minister Arvind Kejriwal at his residence here on Wednesday. Party’s MLA Bhupat Bhayani, who had initially hinted that he may go with the BJP to ”resolve several key issues” of his constituency but later set aside all speculations, saying he was not unhappy with AAP, was also present during the meeting.

Met with the newly elected AAP MLAs from Gujarat. I extend my best wishes to them for a successful tenure as they will tirelessly serve the people of Gujarat. pic.twitter.com/olbbB6vI2W

”It was a courtesy call with the AAP’s national convenor,” Italia told PTI. AAP sources said Kejriwal held a meeting with his party’s Gujarat unit leaders, including the five MLAs, and discussed the strategy to further expand the party’s base in the BJP-ruled state.

”At the meeting, the party’s future strategy for Gujarat was discussed,” another source told PTI, adding that ”the meeting also deliberated on the AAP’s ”national expansion plan and the role it would play in the future elections.” Pathak, who was AAP’s elections in-charge for Gujarat, was appointed as the party’s national secretary (organisation) on Tuesday to drive its expansion plan with an eye on the 2024 Lok Sabha elections.