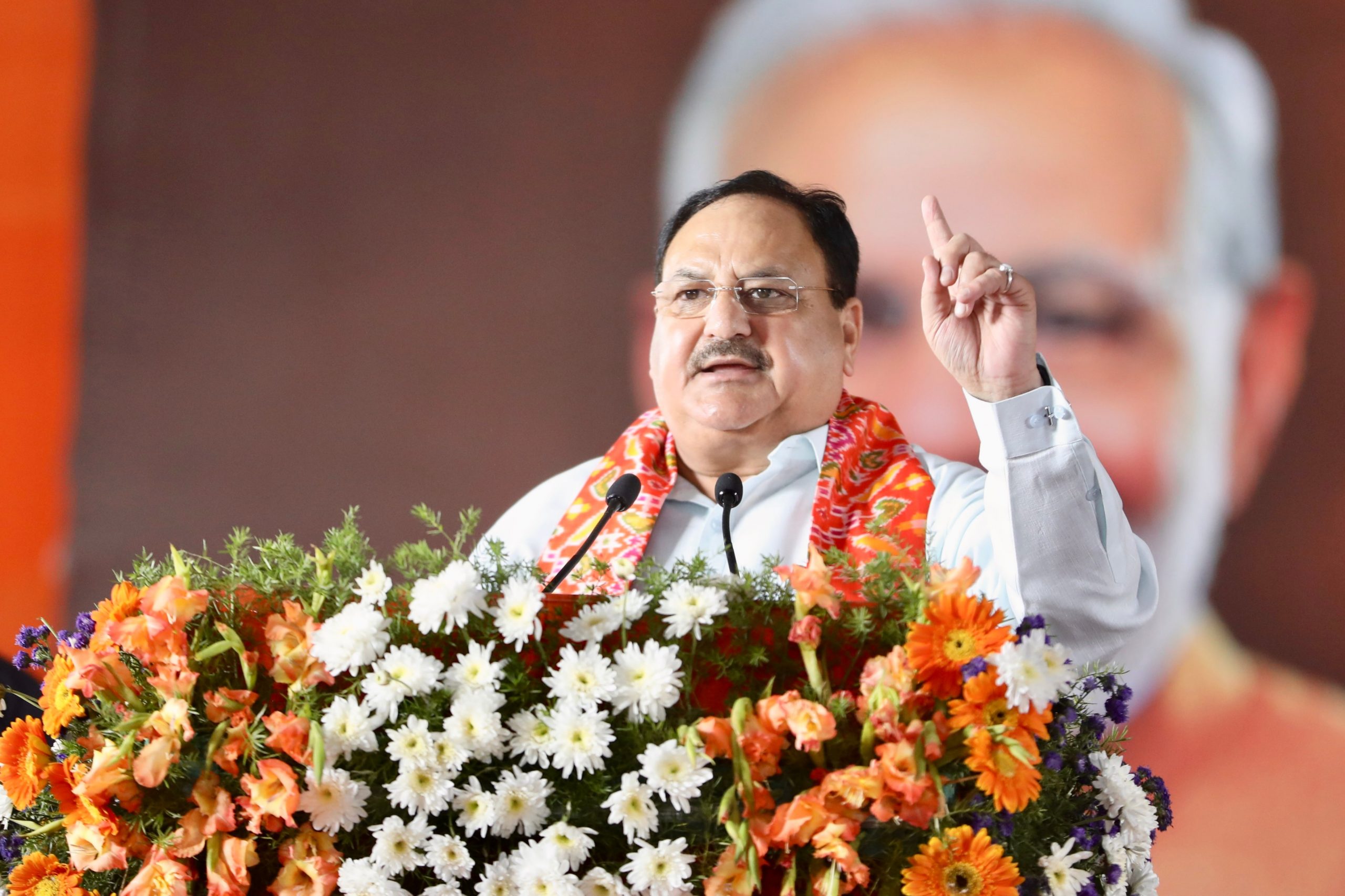 He said the TRS which has recently been renamed as BRS would soon get VRS (voluntary retirement).

This love of the people I felt while addressing the public meeting in Karimnagar for the #PrajaSangramaYatra5 makes me certain that Telangana wants to uproot this corrupt BRS government so the full benefit of the pro-development works of Hon. PM @narendramodi Ji reaches them. pic.twitter.com/e5CqUOZSc7

Addressing a public meeting here to mark the conclusion of the fifth phase of Statewide ‘padayatra’ by Telangana BJP president Bandi Sanjay Kumar, Nadda attacked the BRS, referring to the CBI examining Kavitha, an MLC.

”KCR saab may get angry. But, why the agencies had to call his daughter for questioning. What is the reason? What is there in it?,” he said.

Nadda, who accused Chief Minister Chandrasekhar Rao of corruption at the ”macro-level”, said the time has come to bid goodbye to Rao.

The Ministers and MLAs of BRS were involved in graft at the micro-level, he alleged.

He claimed that Rao reduced Telangana, which was a rich State, into a poor and debt-ridden one now.

Nadda also slammed KCR for allegedly promoting family rule and not fulfilling election promises like two-bedroom houses for the poor, farm loan waiver, distribution of lands to Dalits, unemployment dole and others.

He claimed that the BRS tried to stop the ‘padayatra’ of Sanjay Kumar during its previous phases and even his own journey on Thursday. He, however, did not elaborate.

”I would like to tell KCR. This is democracy and people bury repression in the dustbin in a democracy,” he said.

The Modi government is working for strengthening all sections of society, while the KCR government is corrupt and anti-people, he said.

He highlighted an Adivasi leader (President Droupadi Murmu) and a Dalit leader (Ram Nath Kovind) being made President of the country and also the development works carried out by NDA government in Telangana, including National Highways, drinking water schemes and others.

The BJP president hit out at the BRS government over its ‘Dharani’ portal for land records management system saying that it has become a ”mode of loot for BRS people.” Charging that CM KCR did not celebrate the ‘Telangana Liberation Day’ on September 17 (the day erstwhile Nizam State of Hyderabad merged with the Indian Union) owing to his ties with AIMIM president Asaduddin Owaisi, Nadda said the liberation day celebration started by Union Home Minister Amit Shah would be taken forward on a large scale.

The BRS government changed the name of ‘wellness centres’ started by the NDA government as ‘basti dawakhanas’ in the State, he claimed.

”But, you are duplicate, we are original. People of Telangana know this,” he said.

Asserting that only BJP can defeat the BRS, he asked those opposed to BRS and its alleged corruption, family politics and others to strengthen the BJP.

Sanjay Kumar had launched the fifth phase of his ‘padayatra’ on November 28 in Nirmal district.

He kicked off his Statewide ‘padayatra’ last year after offering prayers at the Bhagya Lakshmi temple at Charminar in Hyderabad.