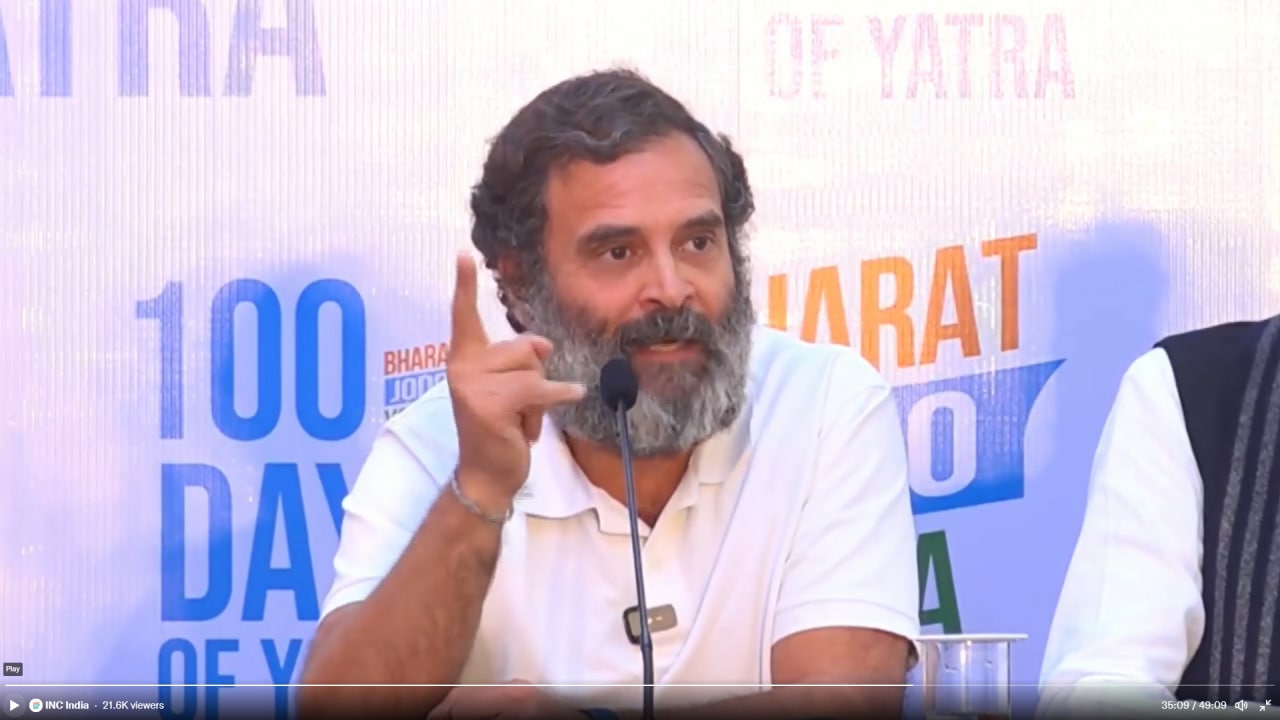 NEW DELHI: The Congress should not be underestimated and it will take down the BJP, Rahul Gandhi said on Friday and asserted that the Congress is different from a large number of Opposition parties as it represents a vision for the country which none of the regional outfits can do.

LIVE: Shri @RahulGandhi addresses media at PCC office in Jaipur on the completion of #100DAYSOFYATRA https://t.co/DBPL7joOnv

He also claimed that his party would have probably beaten the BJP in the Gujarat assembly polls had the Aam Aadmi Party not been put up as a ”proxy” and used to target the Congress.

Addressing a press conference here on the completion of 100 days of the party’s Kanyakumari to Kashmir Bharat Jodo Yatra, Gandhi said the idea that the Congress is dying is a fantasy of many, but it won’t come true.

Asked about the exodus of leaders from the Congress in the recent past, he said if certain people who don’t have the courage to face the BJP, are corrupt and the BJP can apply pressure on them, they are welcome to leave the party.

”We don’t want them. What we need is people who are fighting the BJP, who believe in the Congress ideology and who are standing firm against the fascism that is taking place in this country, that is what we need,” Gandhi said.

He rejected suggestions that winning the Himachal Pradesh polls was like a ”drop in the ocean” in the current scenario.

Responding to a question, he said, ”Please don’t underestimate what the Congress is. What has happened is that, and with all due respect you (media) have been responsible for it, there has been a systematic defamation campaign run against myself for sure and against the Congress, and the press has participated wilfully in this,” Gandhi said But the idea that the Congress is withering away and is ineffective, has all been preached by the BJP, the former Congress chief said.

”Mark my words, the BJP is going to be taken down by the Congress,” he asserted.

Gandhi said lakhs and crores of party workers are its strength and ”if we utilise our workers well, we will be able to ensure a massive victory of the Congress in Rajasthan in next elections”.

Asked about the response to the Bharat Jodo Yatra so far, he said it has been overwhelming in Rajasthan and the Hindi speaking belt.

”We saw that it is not just the party workers, but the general public also loves the Congress a lot…Critics felt the Bharat Jodo Yatra will fail in Rajasthan due to factionalism, but it has been a huge success here and the response has been overwhelming,” Gandhi said.

He also said the Congress was different from a large number of Opposition parties as it represents a vision for the country which he asserted none of the regional parties can do.

Asked when would the Congress take the lead in uniting the Opposition on the road to 2024, Gandhi said this should be asked of party chief Mallikarjun Kharge.

”I have a view that the Congress must work with all the opposition parties. There is a lot of space to do that. But the exact strategy for how it is going to be done that you will have to ask the new Congress president, I am not involved in that right now,” he said.

Gandhi alleged there are multiple reasons why the BJP wins elections such as ”they have huge amounts of money, they use the institutions of the country, they pressurize and threaten people”.

Those tools are not available to the Congress and it does not want to use them, he said.

”We will never take over the institutions of this country because we are the ones who built them and we know that they belong to the people of this country, we will not touch them. We don’t have access to that money we never will. We don’t offer the conveniences that the BJP offers as we say inconvenient things related to farmers, labourers and small businesses and do all that, so we will never get that money,” he said.

He claims that the day the Congress understands in-depth who it is and what it stands for, it will win every election that it faces.

There is also the matter of fighting the elections operationally which the Congress is getting better at, Gandhi said.

The Himachal Pradesh election, ”we faced the full money power of the BJP, its full organisational capability, but we beat them”, he said.

”And frankly in Gujarat, if the AAP had not been put up as a proxy and had not been used to target the Congress, we would have probably beaten the BJP there as well,” Gandhi said.

The former Congress chief also said that the media writes about Aishwarya Rai, Virat Kohli, Amitabh Bachchan, but not about knowledge, love one can get from general public. The yatra, which was launched on September 7 in Kanyakumari has traversed eight states Tamil Nadu, Kerala, Karnataka, Telangana, Andhra Pradesh, Maharashtra, Madhya Pradesh and now, Rajasthan.

It has seen participation from a cross-section of society, including film and TV celebrities such as Pooja Bhatt, Riya Sen, Sushant Singh, Swara Bhasker, Rashami Desai, Akanksha Puri and Amol Palekar.