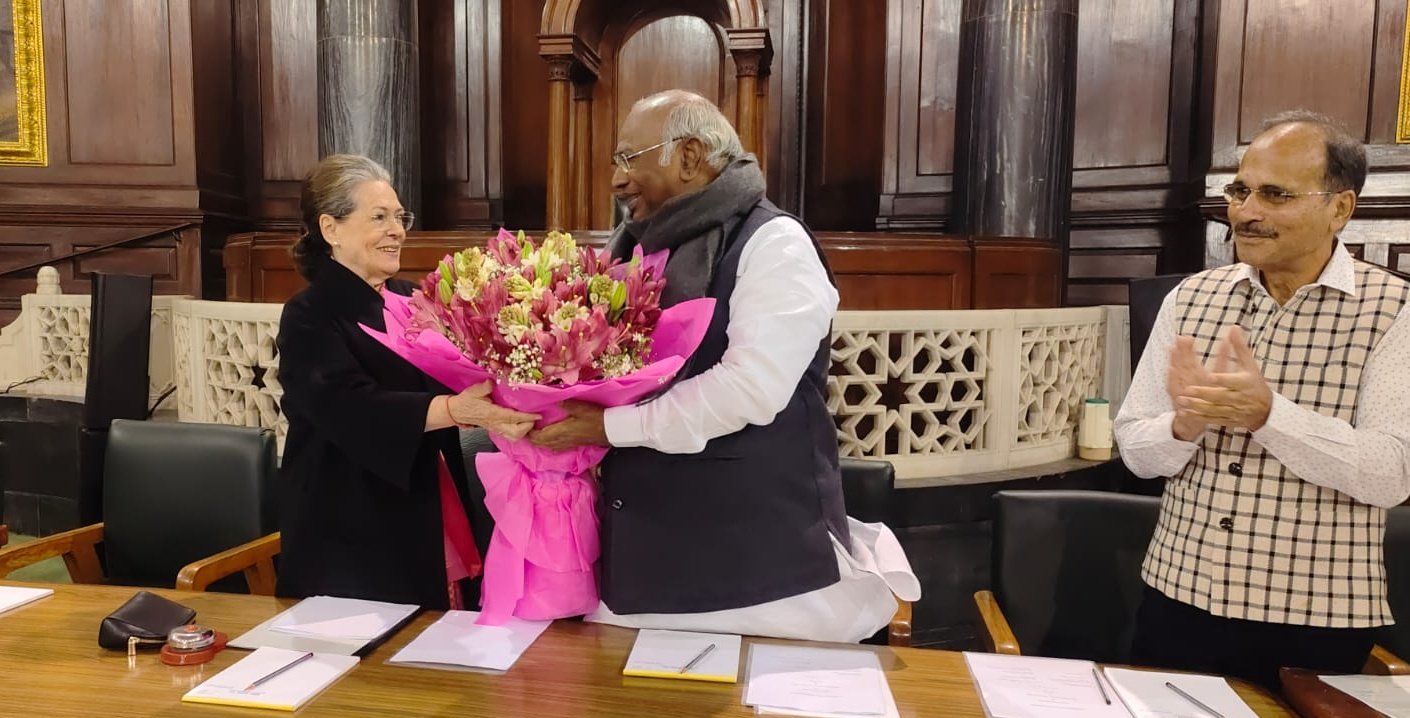 NEW DELHI: Amid the Opposition’s offensive against the government over the India-China border tensions, Congress leader Sonia Gandhi on Wednesday chaired a meeting of all party MPs in Parliament to discuss the strategy for the remainder of the Winter Session.

The Congress Parliamentary Party (CPP) meeting was held at Parliament’s Central Hall with party president Mallikarjun Kharge, Leader of the Congress in Lok Sabha Adhir Ranjan Chowdhury and all party MPs in attendance.

Gandhi is the chairperson of the CPP.

What did Sonia Gandhi say at the CPP meeting ?
Let me begin by extending a warm welcome to Shri Mallikarjun Kharge. This is his first CPP meeting as Congress President. We look forward to his leadership and guidance.

We meet at a time when our country continues to face significant internal and external challenges – inflation, unemployment, social polarization, weakening of democratic institutions and repeated border incursions. As the principal opposition party, we have a great responsibility and we must continue to strengthen and renew ourselves to fulfil it.

The economic situation continues to be distressing, despite the government’s repeated insistence that all is well.The price of daily commodities continue their intolerable rise, placing a heavy burden on crores of households. The inability to provide jobs, especially for the youth, has been a feature of this government’s tenure. Even as the Prime Minister hands over appointment letters for a few thousand, crores more face an uncertain future with government vacancies unfilled, exams unreliable, and PSUs being privatized. Small businesses, which generate the bulk of employment in the country, are still struggling to survive after the repeated blows of demonetization, a poorly implemented GST, and a mismanaged response to the COVID pandemic. Farmers face rising costs, especially of fertilizers, uncertain prices for their crops, all these made worse by increasingly erratic weather conditions. However, farmers seem to be no longer the government’s priority after it’s misguided attempt at forcing down the three farm laws.

The continuing incursions by China on our border is a matter of serious concern. The whole nation stands with our vigilant soldiers who repelled these attacks under difficult conditions. The Government, however, stubbornly refuses to allow a discussion on the issue in Parliament. As a result, Parliament, political parties and the people remain ignorant of the true situation on the ground.

When facing a significant national challenge, it has been the tradition in our country to bring Parliament into confidence. A debate can shed light on several critical questions. Why is China emboldened to continually attack us? What preparations have been made to repel these attacks, and what more needs to be done? What is the Government’s policy to deter China from future incursions? Given that we continue to have a severe trade deficit with China, importing far more than we export, why is there no economic response to China’s military hostility? What is the government’s diplomatic outreach to the global community? A frank discussion strengthens the nation’s response. It is the duty of the government of the day to inform the public and explain its policies and actions.

This refusal to allow a parliamentary debate on such a matter of grave national concern – shows disrespect for our democracy, and reflects poorly on the Government’s intentions. It demonstrates its inability to bring the nation together. On the contrary, by following divisive policies, by spreading hatred and targeting some sections of our society, the government makes it harder for the country to stand up as one against foreign threats. Such divisions weaken us and make us more vulnerable. At times like this it must be the government’s endeavour and responsibility to unite our people, not divide them as it has been doing these past several years.

Unfortunately, silence on matters of serious concern has become the defining feature of this government’s tenure. While blocking debate, the Government is also actively engaged in targeting the opposition and any questioning voices, manipulating the media and undermining the institutions which stand in their way. This is happening not only in the Centre, but also in every state where the ruling party governs. A troubling new development is the calculated attempt underway to delegitimize the judiciary. Ministers –- and even a high constitutional authority — have been enlisted to making speeches attacking the judiciary on various grounds. It is quite clear that this is not an effort to provide reasonable suggestions for improvement. Rather, it is an effort to reduce the standing of the judiciary in the eyes of the public.

The recently concluded elections have seen the Congress form a government in Himachal Pradesh, even as the results in Gujarat and Delhi have been unfortunate. I congratulate our colleagues in Himachal Pradesh for their victory. Now, it is time to fulfil the promises made to the people of Himachal.

The Bharat Jodo Yatra led by Rahul Gandhi is a matter of pride. It is a unique outreach that seeks to take the message of the Congress Party directly to the people and, in return gain first hand understanding of their problems and aspirations. In the South and in the North; in cities, towns and villages; in the cold, rain and heat; lakhs of men, women and children have joined the Yatra. I thank every Indian who has supported the Yatra and its message of fraternity and equality.

I thank Rahul ji for his courage and determination, and all the leaders and karyakartas whose untiring efforts are making this Yatra – a resounding success. The response to the Yatra shows clearly that most Indians desire peace, harmony and social and economic equality. I hope that we can build on the energy and momentum of the Yatra, to ensure that we continue dialogue with people. The Haath se Haath Jodo Abhiyan has already been announced.

I hope that we, as Congressmen and women, will join in the Andolan and other campaigns and fulfil our responsibility to the people of India.