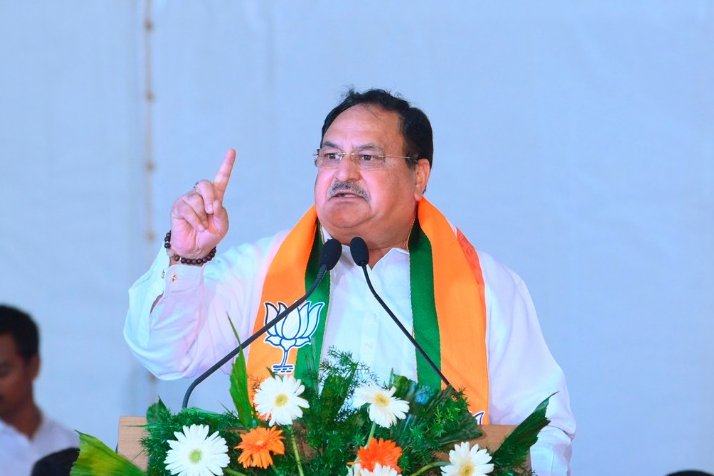 TUMAKURU: BJP National President J P Nadda on Friday said his party is synonymous with development, while Congress means ”vinash” (destruction), as he asked people of Karnataka to ensure that the leaders of the opposition party sit at home after the assembly polls.

The overwhelming response of the people in favour of the BJP was a joy to witness today during the public meeting in Tumakuru, Karnataka. Every citizen is now witnessing how India is scaling new heights of progress under the visionary leadership of Hon. PM @narendramodi Ji. pic.twitter.com/jGN9DvIYJt

Addressing a public rally in Tumakuru, he said, on one side there is BJP and its leaders who are marching ahead with the agenda of development, while on the other hand there are those leaders (from Congress) who want to deflect public attention from development.

”Politics has changed, the time has gone when one could have done politics by misleading people. Now, the time has come when one can stick around by doing his duty, if not he or she will be made to sit at home. That’s the reason people have made Congress sit at home, and I’m confident that people of Karnataka will continue to do it (in assembly polls),” he added.

Nadda was addressing a public meeting at the end of his two-day visit to poll-bound Karnataka, during which he held meetings and interactions with party leaders and workers in Tumakuru, Chitradurga and Davangere districts, and visited Maths of various communities. Assembly polls is likely by April-May.

Alleging that UPA rule at the Centre and Congress government in the state led by Siddaramaiah had neglected Karnataka and its people, Nadda said when NDA and BJP government came in, whether it is Modi in Delhi or Yediyurappa and Bommai here, they always thought about the people here first.

”Congress created rift between people who lived like brothers, they created fight between villages, regions and state for the sake of their vote bank politics and to promote vanshvaad (dynasty politics). But under the leadership of PM Modi, the country’s political culture changed, vanshvaad was ended and vikasvaad was started, and politics of development is being promoted,” he said.

Stating that Congress used to do appeasement politics, while BJP spoke about ‘Sabka Saath, Sabka Vikas, Sabka Vishwas, and Sabka Prayas’, the BJP President said both Yediyurappa and Bommai under the leadership of Modi have implemented this in Karnataka in letter and spirit.

”When the whole world is in distress, India’s economy under Modi’s leadership is growing at a fast phase and this is the reason the country has been able to put behind the British, who ruled us for about 200 years, to become the fifth biggest economy,” he said.

Complementing the state government for hiking reservation for SCs from 15 to 17 per cent and for STs from 3 to 7 per cent, he further said all the party’s leaders can proudly proclaim that they have served Karnataka and will continue to do so to take it forward on the path of development.

He also highlighted Karnataka’s positioning in terms of investment, innovation, FDI inflow, in aviation sector, and the infrastructure push given by BJP governments both at state and Centre.

Hitting out at Congress leader and former chief minister Siddaramaiah’s recent ”puppy” jibe at Bommai, he said it reflects on the standard of his leadership, and making such remarks against an elected leader is like insulting the people of Karnataka.

”It has taken the level of Karnataka politics to a new low. It is a kind of stigma on Karnataka’s politics…such people without any work and agenda have only one thing to do which is offering puja to one family (Gandhi family). I’m confident that the people of the state will make them (Congress leaders) sit at home,” he said.

Earlier in the day, addressing a gathering of professionals and intellectuals in Davangere, Nadda said the political culture of the country has changed after Modi took over as Prime Minister in 2014.

Accusing the Congress of indulging in politics of ”divide and rule” and representing corruption, commission and casteism, he said the BJP stands for mission, service to the society and development.

”I’m not exaggerating, the previous government of UPA was under the conglomeration of parties which were propagating dynastic rule, they were family parties, they were spearheading the democratic movement by believing in vote bank politics… They believed in dividing society and rule, they believed in dividing on the lines of religion and caste, to see to it that they ruled for a long time,” he said.

The visit gains significance amid reservation-related demands by various communities and certain decisions taken by the state BJP government in this regard.