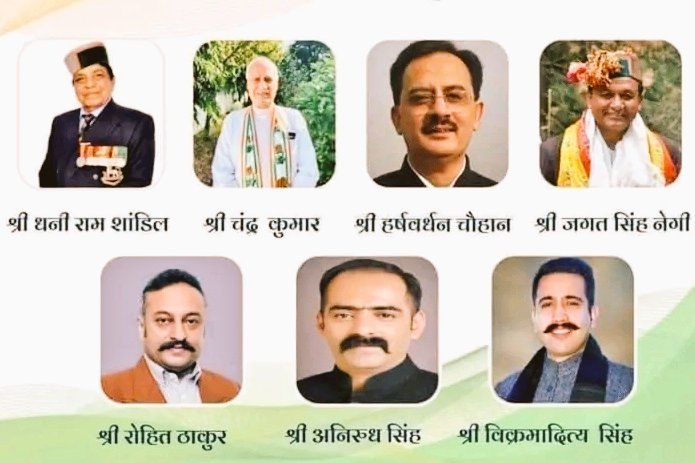 Kangra, Solan, Kinnaur, and Sirmaur contributed a minister each.

Four of the seven ministers hail from the Rajput community, while one each is from Schedule Tribe (ST), Other Backward Caste (OBC), and Schedule Caste (SC). These are the profiles of the new ministers: Vikramaditya Singh: Son of former Chief Minister Virbhadra Singh and state Congress chief Pratibha Singh, Vikramaditya Singh, is a two-time MLA and holds a Post Graduate (History) degree from St Stephen’s College, Delhi.

He was earlier nominated as member, public undertakings and e-Governance-cum-general purposes committees. Singh has been quite active in the party and had campaigned in over 15 assembly segments in the recently held assembly elections. Earlier, he was also a president of Himachal Pradesh Youth Congress. He has represented Himachal Pradesh in Rifle and Trap shooting Competition at National level.

Shandil is a former Social Justice & Empowerment Minister and Lok Sabha Member. He had served in the armed forces from 1962-96 and retired as Colonel. In Congress, he served as the general secretary, and party In-charge in Mizoram, Meghalaya, and Arunachal Pradesh. He has also been a member of the Congress Working Committee.

Shandil, who holds MA, MPhil, and PhD degrees, was also nominated as a member of the welfare, public administration, and ethics committees. He represents the Solan (SC) assembly segment.

Anirudh Singh: Closest aide of Chief Minister Sukhvinder Singh Sukhu and a three-time MLA from Kasumpti, Anirudh Singh comes from the erstwhile royal family of Koti estate. He has been a member of public undertakings, subordinate legislation, and rule committees, and the vice president and general secretary of the state Youth Congress, and vice president, member, and chairman of the zila parishad.

Anirudh Singh became an MLA defeating sitting Urban Development Minister Suresh Bhardwaj, whose constituency was changed from Shimla (Urban) to Kasumpti. Chander Kumar: A grass-root leader with no political background, Chander Kumar, a six-time MLA and former Lok Sabha member, is widely considered to be a self-made leader. He was elected MLA from Jawali constituency.

A postgraduate in geography, Kumar also possesses a degree in law and had joined politics after a brief stint in teaching. He also served as a minister in governments headed by Virbhadra Singh and has a special interest in environment and forests and has written articles on land use planning, forests, and environment.

He has earlier been a member of the School Education Board, Dharamshala, Executive Council of Himachal Pradesh University, HP State Youth Board and Senate, and YS Parmar, Horticulture University.

Negi has also been the vice president and president of the Himachal Pradesh Football Association, and the vice chairman of State Schedule Caste & Scheduled Tribe Development Corporation.

An active sportsman during his college days, he has also played hockey at national level. Rohit Thakur: A grandson of former Chief Minister Thakur Ram Lal and a former chief parliamentary secretary, four-time MLA Rohit Thakur is seen to be among the most down-to-earth politicians in the state and comes from the apple heartland of Jubbal and Kotkhai.

He entered active politics at a very young age and rose to become a member of the Youth Congress State Executive, and later, a secretary of the Congress state committee. He holds a degree in BA (Hons) Political Science.