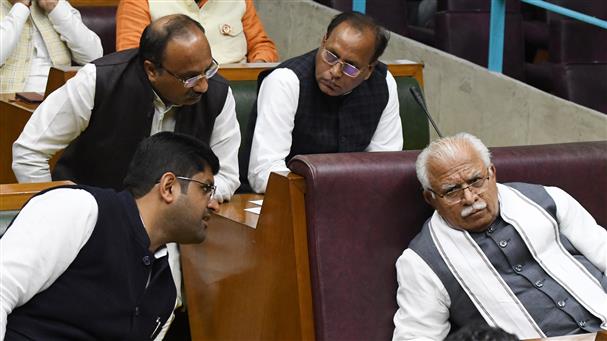 CHANDIGARH: The Congress will move a no-confidence motion against the BJP-JJP government in the Haryana Assembly on March 10 with Speaker Gian Chand Gupta fixing that date and turning down the party’s request to move it on the opening day of the Budget session.

Claiming that “voices of dissent” are being heard among the MLAs supporting the government, the Congress had last month decided to bring the motion against the state government in the Budget session of the Assembly that began on Friday.

Leader of Opposition Bhupinder Singh Hooda had sought to move the motion after the Governor’s address and obituary references on Friday.

The Speaker, however, told him that they could move it on March 10 and on the same day, it will be taken up for discussion.

He said they needed to move a no-confidence motion because the BJP-JJP government has lost public confidence and the coalition government, betraying public opinion, is taking anti-people decisions one after the other.

This is why the public no longer has any faith in this government. The situation has become such that the chief minister, ministers and MLA are not able to go among the public. The coalition government has emerged as the biggest anti-farmer government in the country due to the dictatorial attitude towards the farmers’ movement, he said.

“The BJP-JJP government has betrayed every section of the population, including farmers, labourers, workers, small businesses and the entire working class,” the Congress leader alleged.

“From law and order to unemployment, inflation to corruption, the current government has proved to be a failure on all issues. In such a situation, all MLAs should vote against this government and in support of the motion of no confidence,” he added.

Earlier, on the first day of the budget session, the Congress MLAs led by Hooda reached the Legislative Assembly on foot, walking nearly two kilometres to protest against alleged anti-farmer policies, rising prices and high taxes on fuel.

All MLAs raised slogans against the government and the Centre’s three contentious agricultural laws.

Hooda, who carried placards in support of farmers, said the government should immediately withdraw the three laws and accept the farmers’ demand.

The BJP-JJP coalition government enjoys a comfortable majority in the 90-member Assembly, which currently has an effective strength of 88 MLAs.

Recently, the Kalka seat was declared vacant after disqualification of a Congress legislator following his conviction by a court in Himachal Pradesh in a decade-old case.

The Ellenabad seat, which was represented by the INLD’s lone legislator Abhay Singh Chautala, also fell vacant after his resignation over the farmers’ issue.

The BJP currenly has BJP 40 MLAs, JJP 10, Congress 30, Independents 7, two of whom had earlier withdrawn their support to the Khattar government. MLA Gopal Kanda belongs to the Haryana Lokhit Party.

In a communication to the Assembly Speaker, Kanda has sought exemption from attending the session due to a religious function in his Sirsa constituency.

The Speaker informed the House on Friday that Kanda has communicated to him that the BJP-JJP government has his full support.