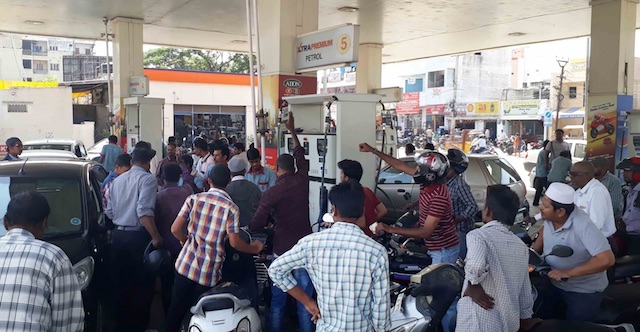 NEW DELHI: The Opposition’s continuous uproar and persistent demand for a discussion on the increase in petrol, diesel and LPG prices on Monday led to washout of the day’s proceedings in Rajya Sabha.

The upper house which met for the first time in the second part of the Budget Session saw repeated adjournments aa the Opposition continued protests inside the House.

Rajya Sabha witnessed four adjournments — first around 10.05 am till 11 am and again till 1 pm and then two quick adjournments of 15 minutes each — before it was adjourned for the day.

The House will now meet on its regular timing of 11 AM to 6 PM from Tuesday, after Chairman M Venkaiah Naidu accepted the demands of some members for a regular sitting.

The House was meeting for five hours from 9 AM to 2 PM since the first part of the Budget Session that started on January 31.

Leader of the Opposition Mallikarjun Kharge gave a notice for suspension of business for Monday and demanded a discussion on the “huge and frequent” rise in prices of petrol, diesel and LPG even when global prices were “low”.

The Chairman disallowed the discussion, saying the issue can be discussed during the course of discussion on the Appropriation Bill, but asked Kharge to mention the subject of his notice considering his seniority.

Kharge said price of petrol was touching Rs 100 and diesel Rs 80 per litre, while LPG rates have increased and prices of petroleum products have gone up.

He claimed that that there has been nearly 820 per cent increase in the prices of petrol and around 258 per cent in excise duty after 2014. He said the central government has made a “profit” of Rs 21 lakh crore in the last six years from tax and cess on petroleum products.

Describing it as a “burning subject”, he said people are agitating across the country.

“That’s why we are requesting you to suspend all the rules under Rule 267 and give us a chance to speak on this subject. Ultimately, what is the government going to tell about this,” he said.

When the Chairman asked him to stop raising the issue and take up the Question Hour, the Opposition members began shouting slogans demanding a debate.

Naidu kept asking members to return to their seats and not deprive members of Question Hour, but the Opposition members were relentless in their demand and kept on shouting.

“If you don’t want the Question Hour to continue, if you want to deprive people of Question Hour, I can adjourn the House…. Please go to your seat. ‘Loktantra ka mazak nahi karna hai’…,” the chairman said.

As members continued to shout, he adjourned the House till 11 am.

When the House re-assembled at 11 am, Congress members again raised their demand forcing another adjournment till 1 PM.

When the House met again, Congress members asked about the fate of their demand and Vandana Chavan, who was in the chair, adjourned the House twice for 15 minutes each at 1 PM and 1.15 PM.

“This is a happy news for all the members. On the request received from many members from various parties, the Chairman has decided that from tomorrow, Tuesday, March 9, 2021, the sitting of Rajya Sabha will commence from 11 am up to 6 pm, as per usual timings of the House.

“The Members will be seated in Rajya Sabha Chamber and Galleries only, with some distancing,” she said.

She then adjourned the House for the day.

Obituary references were made to former members of the house Vidya Sagar Nishad, M Rama Jois and Satish Sharma, who died during the intervening period of the budget session.

In his introductory remarks of the resumed Budget Session, the Chairman complimented Mallikarjun Kharge on becoming the Leader of Opposition and expressed confidence that his vast and diverse experience will benefit the House significantly.

Naidu said members should make it a point to be present in the House to enhance understanding of parliamentary procedures and also use the library facility.

Naidu said he has been told that some members do not attend the proceedings even when they are in the national capital.

“I am told they are in Delhi but they are not present in the House,” he also said, while clarifying that he was not referring to any particular member or any party.

“I appeal to all the members, please make it a point to be in the House and then observe debates, enrich your knowledge,” he said.

To mark International Women’s Day, the Chairman lauded the role of women and said said it is a time to celebrate the social, economic, cultural and political contribution and achievements of women across the globe and honour their indomitable spirit.

“We need to ensure an environment that allows women to express themselves to their full potential in the form of both words and deeds”, he said, wishing more power to women.

A number of women MPs spoke on the occasion, with some raising demanding reservation for women in Parliament and state assemblies to enable them to get adequate representation.

Naidu informed the House that the 8 Committees of Rajya Sabha have spent 12 per cent more time this year on examination of Demands for Grants of 18 ministries over that of last year.