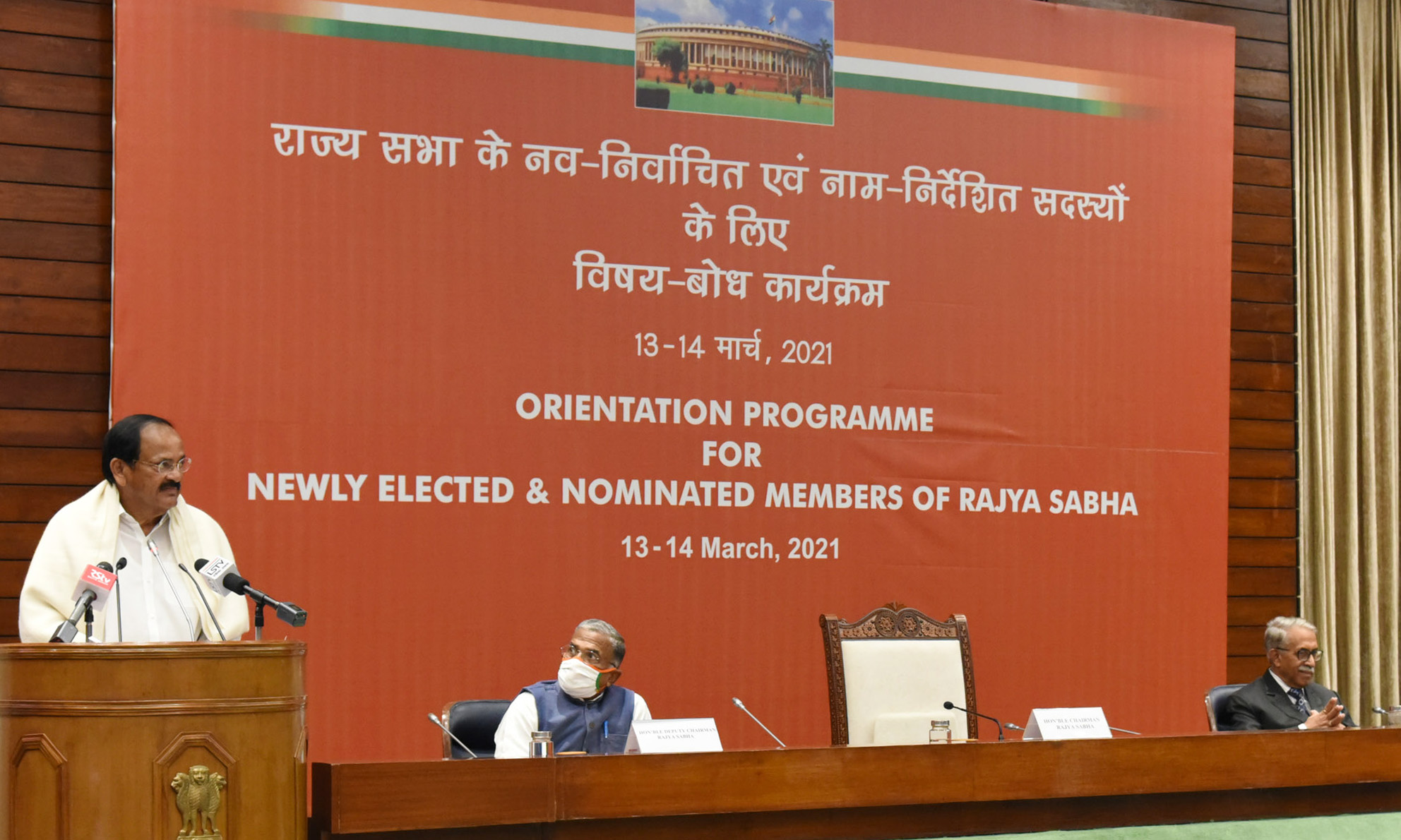 NEW DELHI: Rajya Sabha Chairman M.Venkaiah Naidu has suggested 12 tips to the newly elected members of the House to make a difference to the functioning of the House and making of the nation as effective Parliamentarians.

He counseled the members on their conduct both within and outside the House while inaugurating a two day Orientation programme for the newly elected members of Rajya Sabha.

Naidu stressed that criticism of the government of the day should be informed and credible instead of being for record.

Urging the members to acquire deep knowledge of the State of the Nation to make effective contribution for its transformation, Naidu said; “it is also your duty to ensure and further strengthen the unity and inclusivity of our multi-cultural society by checkmating the attempts to create divisions based on caste, colour, region and religion. Each one of you must emerge as the spokesperson of the aspiring, emergent, capable, resilient and united India.”

He also cautioned the members about the attempts to block the progress of the country whose voice is finding an echo in the global order in the form of disturbances along the boundary, misplaced criticism of the country based on some sporadic incidents, discrediting our democracy, economic restrictions, cross border terror etc and urged them to effectively checkmate such attempts in every forum.

Naidu reminded the members of their solemn duty to defend the integrity and sovereignty of the country by being alert all the time about the threats to the same.

Elaborating on the challenges of time management in the House,Naidu asserted that what is important is not the length of interventions but the content and the perspectives presented. He urged the members to avoid repetitions which even kills the media interest and instead be specific.

He suggested to avoid giving notices as a matter of routine like the Notices under Rule 267 for suspension of the business of the day, the principal source of disruptions and raising Points of Order even when there was no Point to be raised.

The Chairman urged the members to develop in depth knowledge of issues being taken up in the House so as not to be general and vague in their interventions when complex issues with wider implications are discussed.

Expressing concern over the rising ‘negative perception quotient’ among the public about the functioning of legislatures in the country, Chairman Naidu urged the members to abide by the elaborate Rules of Procedure and Conventions of the House evolved over the years to enable smooth functioning of the House.

He further said; “These Rules provide for every contingency. During my 20 years in the Rajya Sabha and three and half years as it’s Chairman, I have never witnessed a situation when inadequacy of Rules was felt in addressing procedural matters in the House.”

Stating that members have the right to seek their due in the House as per the Rules and Conventions and Presiding Officers are their custodians, Naidu observed that it was in the interest of the members and of the House to abide by the decision of the Chair in the end.

He said; “You should appreciate that disregarding the Chair amounts to disrespecting the House. I am sure you would not like to end up doing that.”

The Chairman also urged the members to acquire a thorough understanding of the provisions and philosophy of the Constitution which provides the pathway for socio-economic transformation of the country besides offering the operational matrix for the members.

He also referred to the need for adequate knowledge of the role and evolution of Rajya Sabha and it’s harmonious functioning with Lok Sabha based on a shared vision for development of the country since Independence without being obstructionist. He also stressed on the need for members to be tech savvy to make effective use of information technology in aid of their functioning.

Noting that becoming a legislator is the most sought after assignment in the public life of the country which is more difficult than entering the IAS, Chairman  Naidu urged the newly elected members to seize the opportunity to contribute to the progress of the nations by molding them as effective parliamentarians.