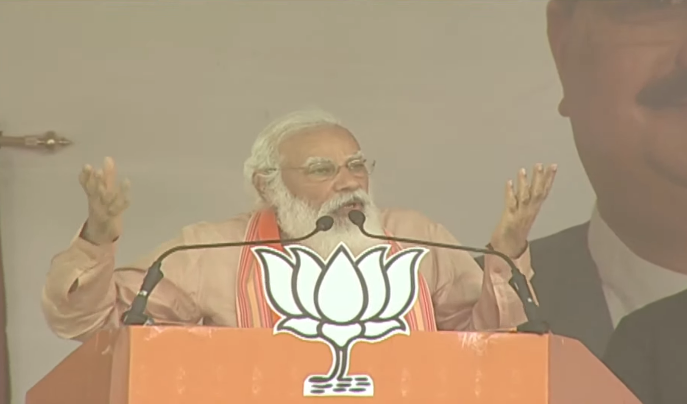 KOLKATA: Prime Minister Narendra Modi Thursday attacked West Bengal Chief Minister Mamata Banerjee for pursuing “appeasement and vote bank politics”, going on to say that on May 2, Banerjee’s khela (game) will be shesh (over) and development will start.

Addressing an election rally in the tribal Jangalmahal region of the state, he alleged the ruling TMC never considered Dalits, backwards and adivasis its own, and these sections were the worst victims of cut money culture and Tolabaji (extortion) by the state’s ruling party.

He also accused the Banerjee government of patronising underground Maoist rebels. “The single-most important reason for infiltration is appeasement and vote bank politics being pursued by didi’s government,” he said.

Repeatedly accusing the TMC supremo of trying to appease a section of people for vote bank politics, Modi said, “People of Bengal have a strong memory. Bengal remembers who accused the army of plotting a coup, whose side you took during the Pulwama attack and the Batla House encounter.” The prime minister hit out at the TMC government on the issue of corruption even during the Covid-induced lockdown.

Referring to a slew of central schemes which the TMC government is yet to implement, Modi said,”We believe in Direct Benefit Transfer (DBT) while TMC believes in Transfer My Commission.”

“The TMC has created a new breed of Maoists in Bengal who loot public money. The money meant for poor people. Didi’s government has patronised Maoist violence,” he alleged.

The prime minister said Purulia’s industrialisation was neglected during the erstwhile Left rule and the current TMC dispensation.

“The TMC goernment has given Purulia only water crisis, forced migration and administration that discriminates,” he alleged.

Meanwhile, while addressing another rally in Assam, Prime Minister Modi said the grand old party can go to any extent to mislead people and garner votes.

Addressing his first election rally in Assam after the announcement of poll dates, the PM said the Congress is moving around with “tala-chabi” (poll symbol of AIUDF) in the state, even as some of its workers were opposed to the idea.

“The Congress has become so weak that it can align with any outfit and mislead people for the sake of getting votes,” he said.

He accused the party of creating “disconnect” between people and places.

“The BJP, on the other hand, has done everything to connect people physically, emotionally and culturally,” the prime minister added.