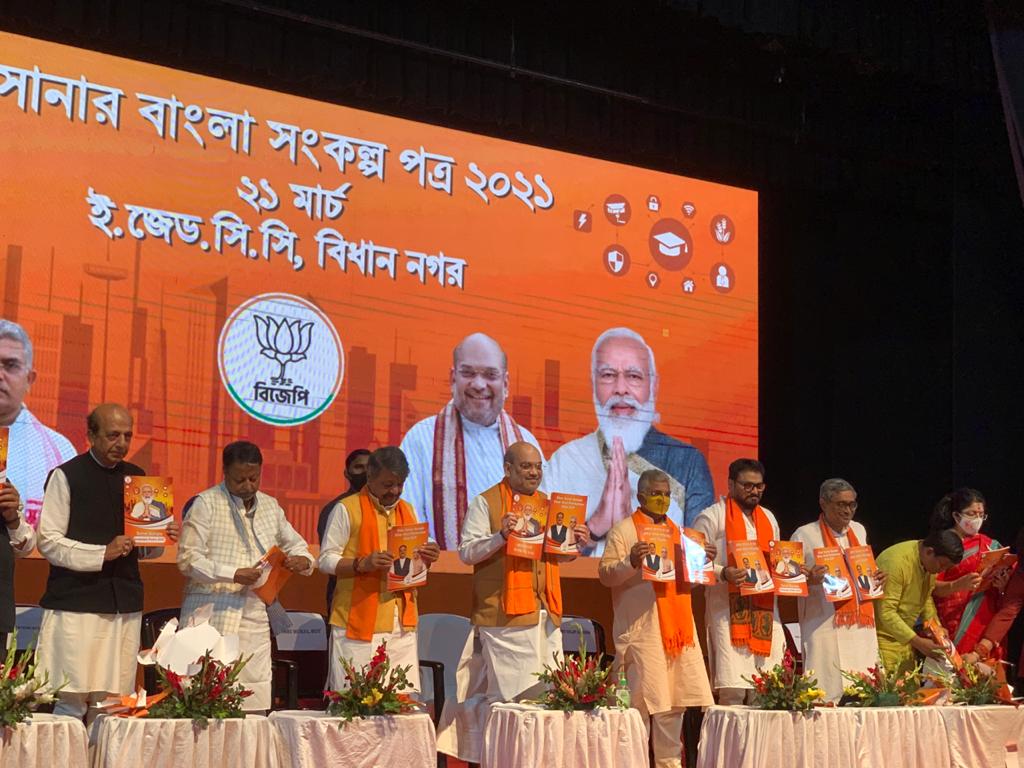 KOLKATA: The BJP on Sunday unveiled its manifesto for the West Bengal elections, promising to build a “Sonar Bangla” by providing employment, strengthening social security schemes and vowing to clear the implementation of the Citizenship Amendment Act in the first cabinet meeting of the new government.

Unveiling the “Sonar Bangla Sankalpa Patra” at EZCC in Salt Lake, Union Home Minister Amit Shah said that BJP will ensure the implementation of the Ayushman Bharat healthcare scheme and the PM-Kisan programme in the state, besides giving at least one job per family.

Assuring to provide arrears of Rs 18,000 to 75 lakh farmers of the state under PM-Kisan, the BJP promised Rs 10,000 per year for them, if voted to power, with Rs 6,000 being contributed by the Centre and the rest by the state.

In the manifesto, the party promised a Sonar Bangla fund worth Rs 11,000 crore to promote art, literature and other such sectors, and a Tagore Prize on the lines of the Nobel Prize.

The party also promised free KG to PG education for all women and free travel for them in public transport.

It promised to build new AIIMS in North Bengal, Jungle Mahal and Sunderban regions, besides toilets and clean drinking water for every family.

Shah said that when the BJP forms the government in West Bengal, people would not have to go to court for organising Durga Puja and Saraswati Puja.

“Bengal has turned into one of the most unsafe states for women. Inaction for years has broken the dreams of the youth and has stopped the flow of employment. In the last 10 years, TMC’s ill-governance has started a dark chapter in Bengal’s history,” he alleged.

In the poll manifesto, the party also promised a Rs 20,000 crore Ishwar Chandra Vidyasagar Fund for the infrastructure development of schools, and five universities at par with IITs and IIMs.

The party said that to transform Kolkata into an international city, it will set up a Kolkata Development Fund worth Rs 22,000 crore and also ensure that the metropolis becomes a UNESCO Heritage City.

“We have decided that we will clear the implementation of the Citizenship Amendment Act in the first cabinet meeting itself, besides approving the Ayushman Bharat scheme for the benefit of the poor,” Shah said.

The party further promised that every refugee family will be given Rs 10,000 per year for five years through direct benefit transfer (DBT).

Shah said that his party would work towards building a safe Bengal, an “appeasement-free Bengal” and an infiltration-free state, if voted to power.

“We will bring back the Bengal that made the entire nation proud,” he said.

“You have given time to Congress, over 30 years to Communists and ten years to TMC. Give us five years to build a Sonar Bangla,” he said, urging the people to vote for the BJP.