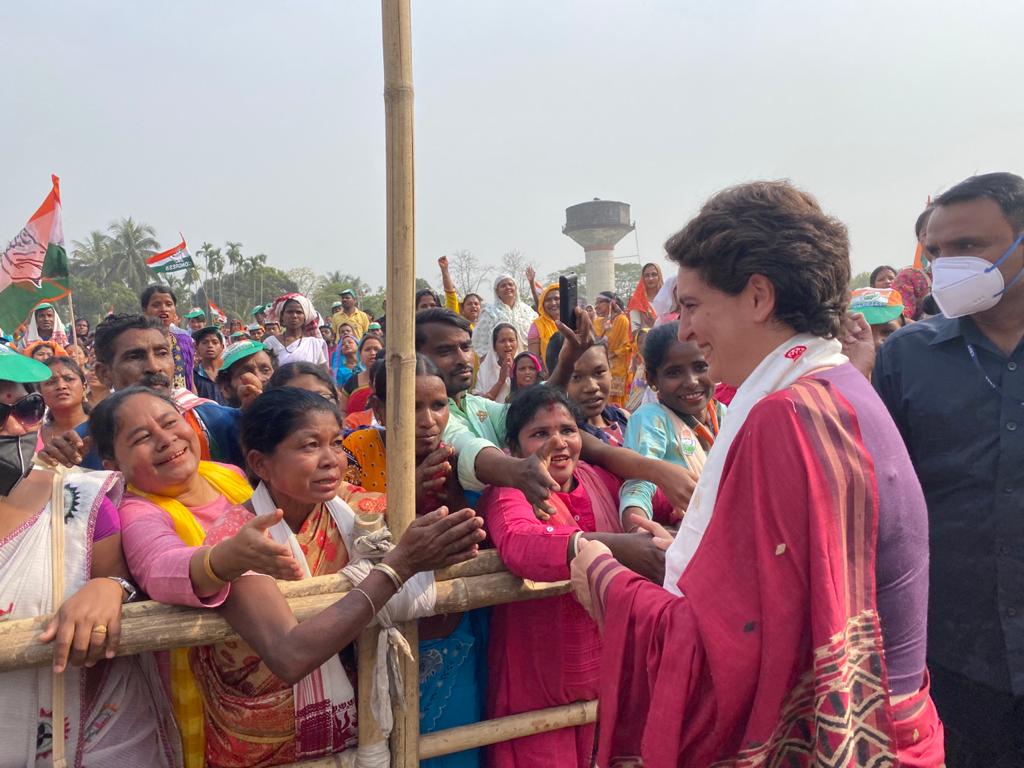 JORHAT: Launching a frontal attack on Prime Minister Narendra Modi, Congress leader Priyanka Gandhi Vadra on Sunday alleged he is sad about a tweet by a 22-year- old woman but not for the flood-ravaged people of Assam.

A day after Modi raised the toolkit issue and alleged Congress conspiracy in it at a poll rally in Chabua in Assam, the daughter of late Prime Minister Rajiv Gandhi, lamented that Modi was silent on peoples’ suffering during perennial floods. Last year’s flooding of the Brahmaputra during the pandemic affected some 2.8 million people.

“I was listening to the Prime Minister’s speech yesterday. He very seriously said that he was very sad about a development. I thought he would speak about Assam’s development or how BJP worked in Assam.

“But I was shocked to hear that the PM was talking about a tweet by a 22-year-old woman (Disha Ravi). He said Congress conspired to finish the tea industry of Assam. He was also sad about Congress mistakenly putting two wrong pictures on social media,” Gandhi said.

She questioned Modi why he was not sad for the people affected by the flood and the anti-CAA movement, in which five youths were killed.

“Why didn’t you come to Assam when people were drowning? Why were you not sad when all the big promises by BJP were not fulfilled? Did you go to tea gardens and talk to workers about their problems?” the Congress leader asked of Modi.

Talking about the Prime Minister’s famous statement of “double-engined” government in Assam, Vadra made fun of it saying the state currently has “two chief ministers”, in an apparent reference to rumours of powerful minister Himanta Biswa Sarma and Chief Minister Sarbananda Sonowal acting as rival power centres.

“The PM said you have a double-engine government but Assam has two CMs. I don’t know which fuel runs which engine. The Assam government is not run in Assam… God save you!” she added.

The Congress leader also alleged that all segments of the society, including Youths, farmers and tea garden workers, have been cheated by the BJP government as it did not fulfil any of its promises made five years ago.