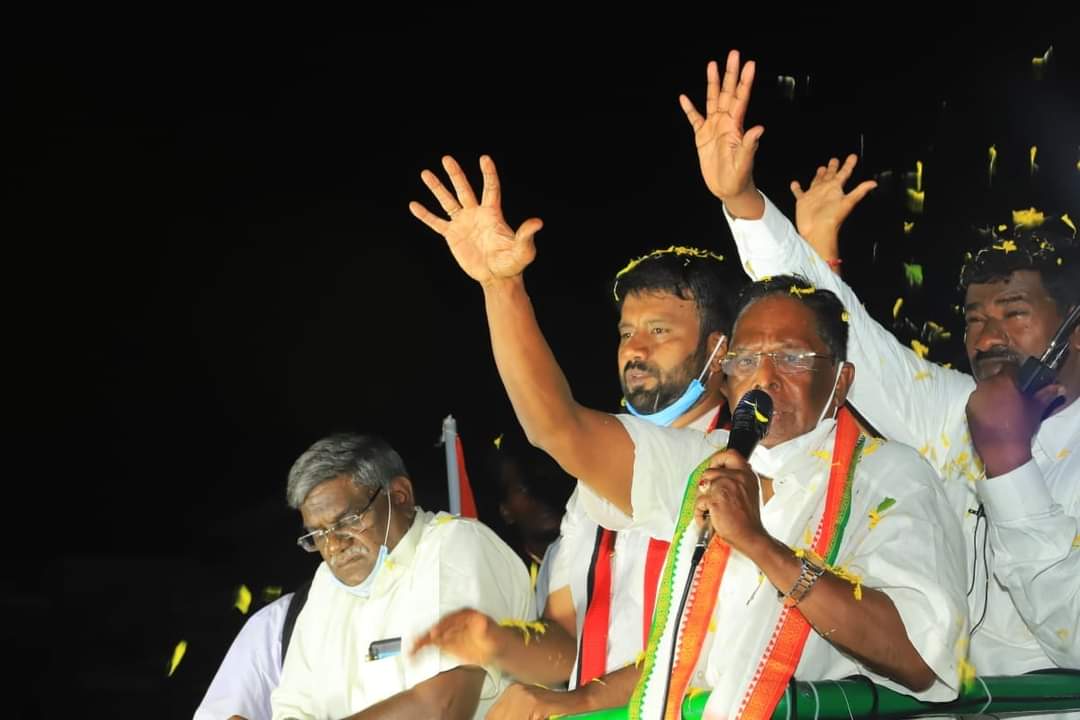 PUDUCHERRY: Senior Congress leader and former Chief Minister of Puducherry V Narayanasamy on Saturday questioned the silence of the Bharatiya Janata Party (BJP) in its poll manifesto on the issue of granting statehood to the Union Territory.

Addressing reporters at the party office here, he said the Congress, DMK and even AINRC (now aligned with the BJP) had been demanding the statehood.

“At one stage, the AINRC leader N Rangasamy had made an appeal to all political parties to boycott the Assembly poll in case the Centre did not sanction statehood to Puducherry,” Narayanasamy said.

“Now that the manifesto of the BJP has not mentioned its stand on statehood, I want to know what is the policy of the AINRC,” he asked.

The BJP manifesto had also not made any promise to write off the loans totalling Rs 7,000-crore due from Puducherry to the Centre over the years, he said.

Prime Minister Narendra Modi too had not made any firm reference to the plea for statehood during his campaign here on February 25, he said.

Narayanasamy alleged the Centre was crushing the business sector through GST (goods and services tax).

Also alleging that the BJP was indulging in money power and misuse of authority in view of April 6 Assembly polls here, the former Chief Minister said the election authorities should be vigilant and prevent questionable practices of the BJP during the poll.

The present election is a fight between principles of democracy and misuse of power, he said.

People are aware of the machinations of BJP and hence would ensure that the NDA bites the dust, he said.

He said the Democratic Youth Federation of India (DYFI) of Puducherry had moved the Madras High Court for relief on the alleged access of Aadhaar-linked mobile phone numbers of voters by the BJP for campaigning by misusing the personal phone numbers of the voters to send bulk messages to them.

Narayanasamy said the Election Commission should intervene and disqualify the candidates of the BJP from contesting the polls.

He said the Congress would write a letter to the election authorities soon to push the demand for disqualification of the BJP nominees in the backdrop of allegation that the BJP had accessed the mobile numbers of the voters and stolen them for campaigning.

He alleged that some functionaries of the BJP from Karnataka had been zooming through several villages in Puducherry.

“I receive complaints that these BJP leaders from Karnatka were staying in the villages and were seeking copies of ration cards of the villagers. I see that as a threat to the peace and tranquility from outside Puducherry,” he said.

Hence, he said, the election authorities should keep close vigil and ensure polls were held in a peaceful environment.

The election manifesto of the Congress would be released on Sunday by a delegation of the AICC at the party office here, he said.

The team would include former Central Minister Veerappa Moily, he added.