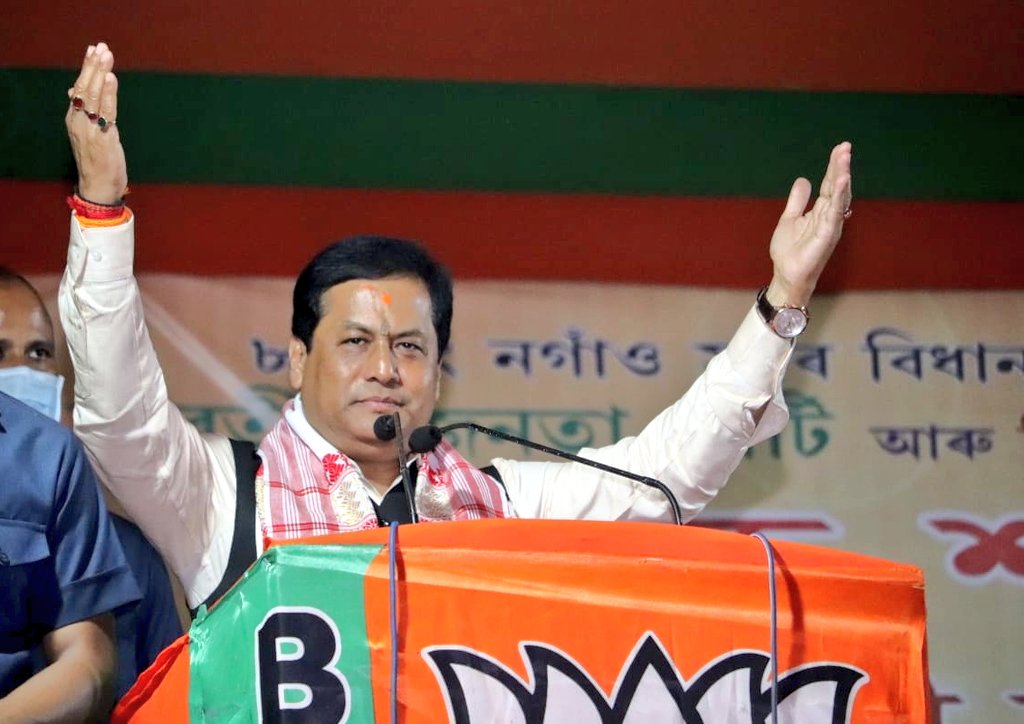 GUWAHATI: Slamming the Congress-AIUDF alliance as the country’s “enemy”, Assam Chief Minister Sarbananda Sonowal has said if it is elected to power it will “endanger” Indians living in the state and strengthen illegal immigrants.

He expressed confidence that people will solidly back the BJP-led NDA in the polls due to its development and peace efforts.

He also played down speculation about the next chief minister if the BJP-led alliance retains power, saying the state government worked like “team Assam” in the last five years and the party’s goal is to win the polls.

The BJP’s decision to not name its chief ministerial face has set off the speculation with Sonowal’s powerful ministerial colleague Himanta Biswa Sarma being seen as another strong probable for the job besides him.

Sonowal told PTI that Assam has advanced in all sectors under the BJP rule, and the government has worked to unite all sections of society, resulting in durable peace.

He asserted that the BJP, if elected to power, will establish an “error-free” National Register of Citizens, a poll promise of the party, to ensure that all Indians are included and no illegal immigrant finds its way in.

Asked about his assessment of the state poll results, he noted the BJP-led alliance has set a target of 100 plus seats and expressed confidence that it will achieve it.

Voting for the first phase of polls in 47 of the total 126 seats was held on Saturday.

Making light of the Congress’ promise of not implementing the Citizenship (Amendment) Act in the state if it comes to power, Sonowal said it cannot do anything as this is a central law.

He termed the Congress-All India United Democratic Front alliance as an “enemy of the country”.

“Those who stand for foreign infiltrators can never by the country’s well-wishers. If the Congress-AIUDF comes to power, its government will endanger Indians living in the state and strengthen illegal infiltrators. If this alliance wins, it will work for them,” he claimed.

Illegal immigration has long been a sensitive issue in the northeastern state which has seen numerous protests by indigenous communities over the decades against it.

Sonowal, who was associated with All Assam Students’ Union and Asom Gana Parishad before joining the BJP, has been a key figure of the movement as it was on his plea that the Supreme Court struck down Illegal Migrants (Determination by Tribunal) Act, 1983, which was enacted by the then Congress government and was criticised as ineffective against the problem of illegal immigration, mostly from Bangladesh.

Earlier Congress governments gave space of illegal immigrants while his government has taken many steps against them and advanced the cause of Assam’s “self-respect”, he said.

The AIUDF under Badruddin Ajmal was forced after the Supreme Court struck down the law to further the cause of illegal immigrants, he alleged.

Congress and Ajmal have accused the BJP of linking the AIUDF leader with illegal immigrants to polarise voters for the electoral gains.

The identity of Assam and the entire northeast region have received a boost under the Modi government at the Centre, Sonowal said, and added that the state dispensation has restored people’s trust in the system with its measures against corruption.

A former state service commission chairperson and other members remain behind bars and many of those who got jobs by corrupt means have been sacked and even jailed, he said, asserting that his government ushered in merit-based selection.

He also mocked Congress leaders Rahul Gandhi and Priyanka Gandhi Vadra for their promises to tea-garden workers, wondering if they really know their problems and asking what their government did for them earlier.

The BJP government hiked their wages by over Rs 80, brought roads, electricity and water to their doorsteps and opened 119 schools for their children, he said.