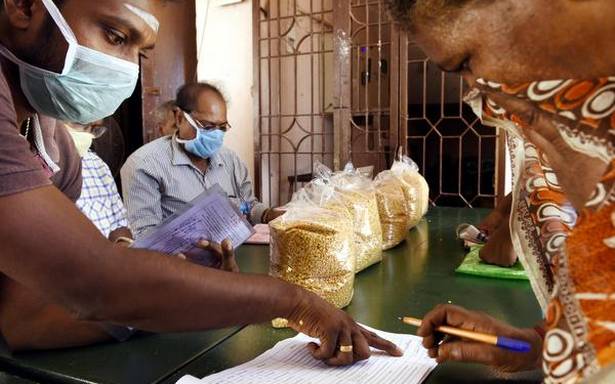 KOZHIKODE: As the ruling and oppositionfronts continued to spar over distribution of subsidised rice during the festival season ahead of the April 6 Assembly polls, Kerala Chief Minister Pinarayi Vijayan on Sunday alleged that the Congress-UDF had “misled” the Election Commission over the matter.

Theopposition wasplaying “dirty politics” by trying to block supply of ration rice and food kits to the people,Vijayan said a day after the EC ordered to stop thedistribution following the opposition’s complaint.

The LDF, which will ride back to power, is committed to transform Kerala into a hunger-free state where shelter would be made a right of every citizen,Vijayan told reporters here.

Attacking senior Congress leader Ramesh Chennithala for approaching the Election Commission against distribution of subsidised rice and food kits alleging violation of code of conduct, Vijayan said distribution of rice and essentials was nothing new and was being continued to help the people affected by the COVID-19 pandemic.

Chennithala had approached the Election Commission alleging that the LDF government was playing politics with distribution of free rice days before the election.

The opposition was of the view that Vishu food kits and pensions should only be given after the elections, as the model code of conduct was in force.

The BJP also accused the government of vested interest behind the move.

Asserting that the food kits distributed by the government had helped the people survive without starving throughout the pandemic days, he said the next LDF government will ensure that none in the state will starve.

“We will start ‘janakeeya’ hotels across the state to ensure food for all and special food outlets would be opened in plantation areas. The Civil Supplies and ConsumerFed would encourage opening of private outlets for distribution of provisions and vegetables at affordable prices,” he said.

“No person would be evicted from his house if no alternate arrangement is in place. The state will enact shelter as the right of the citizen,” Vijayan added.

Meanwhile, AICC General Secretary K C Venugopal told reporters the UDF has never said that the free provision kits should not be distributed in view of the elections.

But a deliberate attempt was made to delay the distribution, he alleged.

Chennithala said it was not the opposition which was playing politics over the issue, but the Left Front which had stopped distribution of rice for 6-7 months.