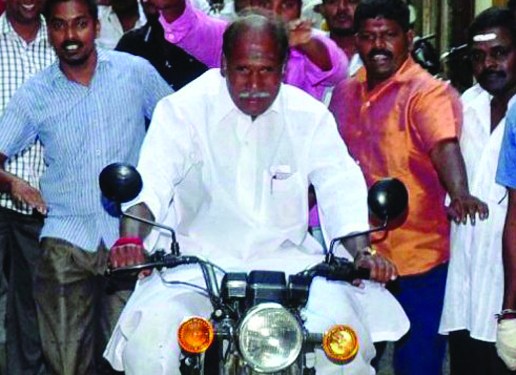 PUDUCHERRY: AINRC founder-leader N Rangasamy on Monday said the nearly five-year rule of the Congressin Puducherry in alliance with the DMK was a failure.

He said the administrative apparatus worsened because the territorial government was locking horns quite often with the NDA government at the Centre and the then Lieutenant Governor Kiran Bedi.

Wooing voters in Uzhavarkarai constituency from where the AINRC nominee and former Local Administration Minister N G Panneerselvam is contesting the April 6 Assembly poll, Rangasamy said the Union Territory witnessed an amusing scenario of a Chief Minister and his colleagues resorting to agitations against the Centre and Bedi.

If the government staff with grievances related to poor pay resorted to agitations, there would be some justification, he said.

“But an elected team of Ministers resorting to agitations is amusing,” he said.

Rangasamy, who was Chief Minister thrice in the past, further said, “I had run the government with limited powers and without being at war with the Centre and the Lt Governor.”

He said, “Everyone knows that a Union Territory government has limited powers administratively. That is why we insist on statehood for Puducherry. But, rising in revolt against the Centre would not fetch any result and this was proved during the Congress rule.”

Rangasamy said by taking up the issue of powers to the government before court, the Congress government had exposed the fact that a territorial government is powerless.

He appealed to the voters to support the NDA headed by AINRC and in which the AIADMK and BJP are the other constituents. Only then, Puducherry would emerge as a developed Union Territory with the support of the NDA government at the Centre, he said.