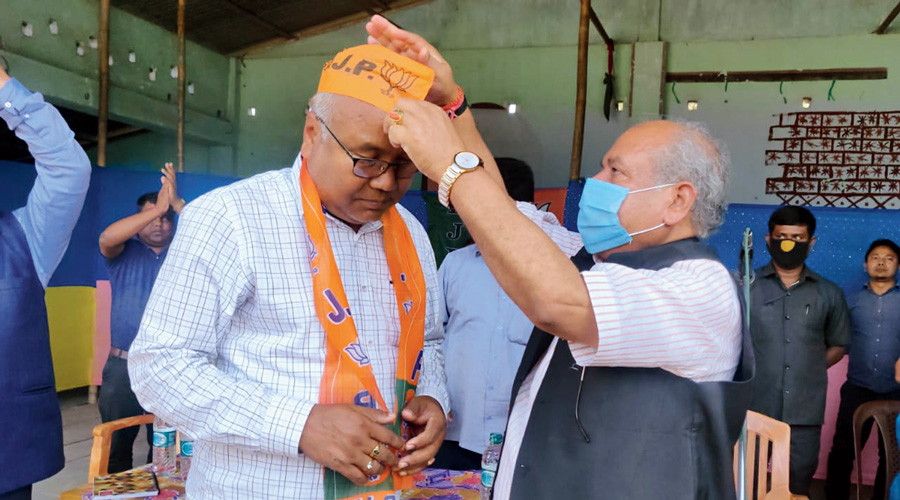 GUWAHATI: Bodoland Peoples Front (BPF) candidate Rangja Khungur Basumatary Thursday joined BJP ahead of the third phase of the poll in Assam when the constituency in which he is a contestant is slated to go to the poll.
Basumatary had reportedly gone missing for two days and at around midnight on Wednesday, senior BJP leader Himanta Biswa Sarma had tweeted that he had met the BPF candidate, who would join the saffron party.
BPF is an ally of the opposition Congress in Assam, where two out of the slated three-phased poll got over on Thursday.

Official candidate of BPF and so called congress led alliance from Tamulpur LAC, Sri Ram Das Basumatary met me a short while ago. He has express his desire to Join @BJP4India and retire from the election.

“Official candidate of BPF and so-called Congress-led alliance from Tamulpur LAC (legislative assembly constituency), Sri Ram Das Basumatary met me a short while ago. He has expressed his desire to Join @BJP4India and retire from the election,” Sarma tweeted.

Rangja Khungur Basumatary is also known as Ram Das Basumatary.
Basumatary told a local TV channel that he had decided to resign from BPF as the party did not lend any helping hand to him during the campaign.
Efforts made to contact him failed as his phone was switched off.
A statement by Congress confirmed that Basumatary has joined the BJP on Thursday.
Tamulpur constituency is in Baksa district under Bodoland Territorial Region and will go to the poll during the third phase on April 6.
Reacting to the development, Congress MP Manish Tiwari said that Basumatary had gone missing due to threatening by BJPN and lambasted the saffron party for it.
Never in India did such immoral activities take place during elections – you (BJP) threatened to use the National Investigation Agency against the party and the candidate.
“You(BJP) want to win the poll by the wrong means. This is a fascist mentality and it is BJP’s education. That party does not believe in democracy and democratic systems. This is absolutely the worst spectare of fascism that is on display in the Assam polls,” he told a press conference here.
Tiwari demanded that the BJP government in the state tell the people what had happened to Basumatary for two days.
“I demand a detailed probe into the incident by Election Commission. How come such an incident took place in front of the EC? Is the EC blindfolded?” the Congress leader said.
AICC spokesperson Gourav Vallabh said a Congress delegation will meet the EC Thursday evening to seek deferment of voting in Tamulpur constituency and disqualification of Sarma, a senior Assam minister, from contesting and further campaigning for the state poll as he is a “repeat offender” of the Model Code of Conduct (MCC).
Vallabh questioned why the EC was not checking Basumatary’s call records to find his whereabouts.
“We demand that the call records of Basumatary be made public so that the people of Assam get to know what coercion, intimidation or what proposal forced him to join hands with the BJP,” Vallabh said.
Commenting on the EC notice to Sarma for allegedly threatening BPF chief Hagrama Mohilary with using the NIA against him, Tiwari said “The EC issued the notice because it is convinced that such threatening language is not acceptable.
“The EC prima facie found him guilty. It is a conspiracy against the candidate. It is an attempt to subvert the election process. They (BJP) don’t believe in democracy and that is why they are resorting to such practice of threatening a candidate who is in the poll contest.
Sarma had said that he had got evidence of Mohilary’s alleged links with the recent recoveries of arms in Bodoland Territorial Region (BTR) and the case was being given to the NIA for investigation.
Later the state Director General of Police Bhaskar Jyoti Mahanta had reportedly said that there was evidence of militant and his group in the arms recovery.
“We ask the Gujarati Mama (referring to Sarma’s allegiance to BJP and that he is popularly called ‘Mama’) when did that evidence come? If it came before the MCC came into force, then why were you silent? It means you were indulging in a criminal offence. If it came after the MCC came into force, then how and who gave the evidence to you because police now reports to the Election Commission.

“Yesterday the DGP said that he has all the information. Is it a coincidence or deliberate? DGP Sir why are you not taking any action? Who has tied your hands? By making such statements, you are not strengthening the democracy, but weakening it,” Vallabh added.