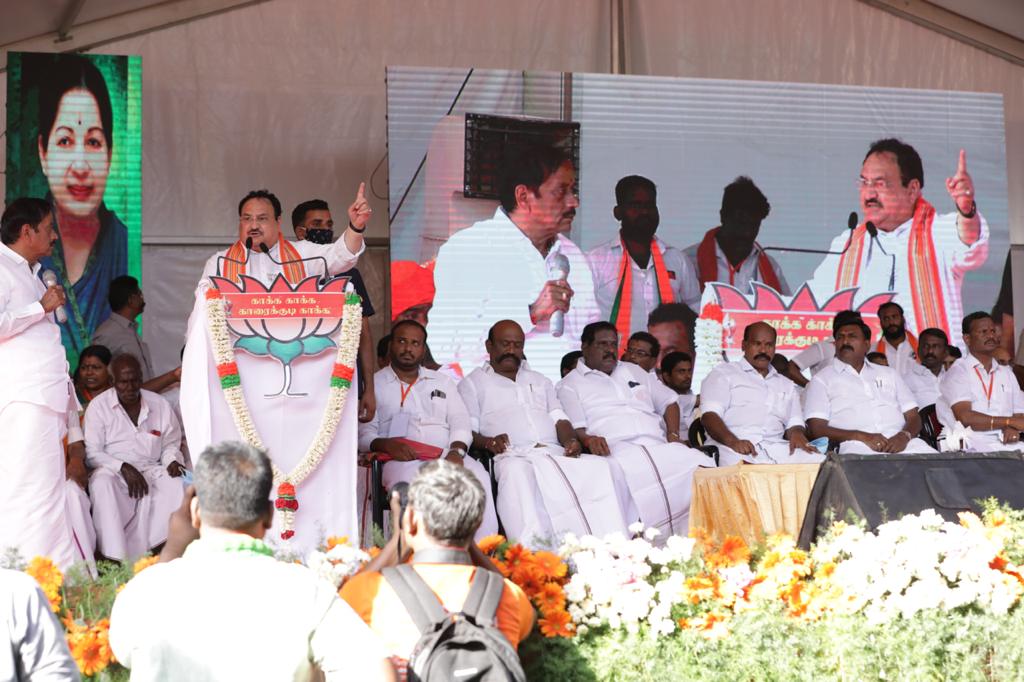 KARIKUDI: BJP chief J P Nadda on Saturday targeted DMK leaders for allegedly using what he called ‘foul language’ against Dalits and dubbed the DMK and Congress as being ‘synonymous’ with corruption.

One could understand what respect they have for Dalits and women, he said here, addressing a poll rally canvassing support for BJP’s H Raja, who is contesting the April 6 Assembly polls from Karaikudi Assembly segment.

Such foul language was used while they were out of power and the way they would treat Dalits and women in the event of winning the polls is a ‘million dollar question,’ he said.

Earlier in Modakurichi, he said the statements of DMK leaders against Dalits and women were ‘shameful’ and the party has to be taught a lesson for it.

DMK Rajya Sabha MP R S Bharathi allegedly made derogatory comments against Scheduled Castes last year, following which a case was filed against him by police, he was arrested and got bail.

DMK’s A Raja recently had spoken against Chief Minister K Palaniswami and over his ‘birth’, following which the Election Commission had taken his name off the list of that party’s star campaigners and debarred him from campaigning for 48 hours.

Raja apologised,but claimed that his words were taken out of context and that he did not make any derogatory comments.

The DMK had strongly hit out at Jayalalithaa over various matters, including corruption issues in the past.

The top BJP leader said none should forget that both Congress and DMK are ‘synonymous’ with corruption.

Dynastic and corrupt parties, the DMK and Congress were defeated twice in polls and they should be drubbed for the third time too, he said.

Referring to the ‘Karuppar Kootam’ controversy of last year, he said it was his party and ally AIADMK that respected and took care of cultural values and people’s sentiments.

Kootam is a fringe group that denigrated a spiritual hymn in praise of Lord Muruga and those involved were arrested.

Nadda said DMK chief M K Stalin never condemned that group, but following the success of his party’s ‘Vel yatra’ last year, he was prompted to hold ‘Vel’ (weapon of Lord Muruga) and pose for pictures with it.

Hailing Tamil language,he said it is one of the oldest in the world. “It is a perfect language and has perfect grammar.”

Nadda accused the Congress of being ‘opportunistic’ and ‘mentally bankrupt.’

In Kerala, Congress fought against the CPI(M), while in West Bengal, the grand old party and the Left were ‘hand in glove’ to oppose the BJP, he said.
“The same way the CPI(M) and Congress are fighting BJP in Assam. This is the mental bankruptcy and the ideological bankruptcy of the Congress party.”

The saffron party leader lashed out at Congress for ‘joining hands with communal forces,’ but falsely terming the BJP as communal.

The Congress has an alliance with the Muslim League in Kerala, ‘Abbas Siddiqui’ (Indian Secular Front) in Bengal and ‘Badruddin Ajmal’ (All India United Democratic Front) in Assam, he said.

The ‘corrupt’ Congress party has to be eradicated ‘lock, stock and barrel’ in Tamil Nadu, he said.

The UPA ‘crushed’ regional aspirations and people’s sentiments by banning the bull taming sport ‘Jallikattu’ in Tamil Nadu and Congress party’s ally DMK ‘kept quiet’ and did not talk about people’s aspirations at that time, he alleged.

During the United Progressive Alliance regime at the Centre, there was none to take care of Tamil fishermen. But after Narendra Modi became the Prime Minister, ‘firing’ incidents against fishermen totally stopped, which showed the government’s ‘courage.’

It was PM Modi who empathised with people’s sentiments and gave ‘permission’ to facilitate conduct of the sport, he claimed.

Nadda recalled that Modi was the first Indian Prime Minister to visit Jaffna in Sri Lanka and he also facilitated welfare initiatives like housing for minority Tamils there.

Also, Father Alexis Premkumar from TN was freed from the clutches of terrorists in Afghanistan and brought home safely due to the intervention of the Prime Minister, he said.

Increased allocations were made by the Centre for Tamil Nadu and 11 new medical colleges, in addition to the All India Institute of Medical Sciences at Madurai, were coming up in the state, he said.

“PM Modi has taken care of TN to the maximum.” Initiatives like the defence corridor would bring fresh job opportunities, he said.

Nadda later held a colourful roadshow in Kanyakumari to seek support for his party’s Pon Radhakrishnan, who is contesting the bypoll to Kanyakumari Lok Sabha constituency and also for nominees for April 6 Assembly polls.

The bypoll will also be held the same day.