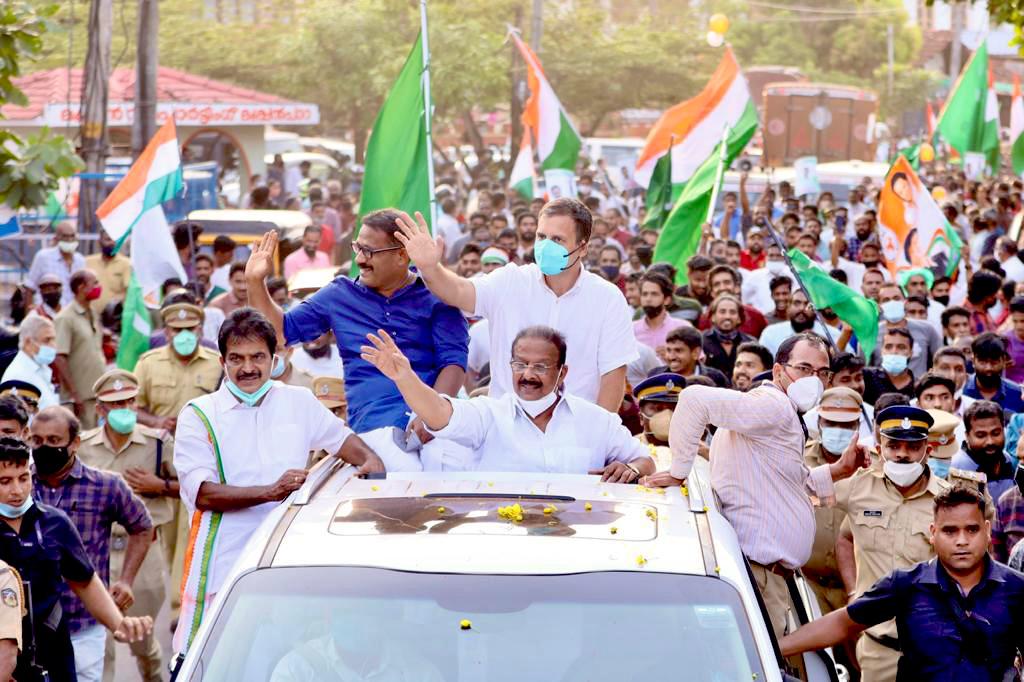 KOYILANDY: Attacking Prime Minister Narendra Modi for his ‘Congress Mukt Bharat’ jibe,Rahul Gandhi on Friday said the BJP leader seems to have issues only with the grand old party and not with the CPI(M).

The people of this beautiful state have showered unconditional love on Mr. Gandhi and the Congress-UDF. We look forward to creating a progressive, secular & united Kerala. #UDFWinningKerala pic.twitter.com/FUJgHGvRsM

Why does the PM never say ‘CPI(M) Mukt Bharat’?” Modi never says that.

While the Congress was a unifying force, the Left front was divisive, he said adding “whereverwe go, we unify everybody.

We are a unifying force. Wherever we go we identify everybody and unite them and make them strong”.

Taking on the RSS, he said they understand that the real threat to them comes from those who unite everybody.

“And they understand very well, just like them, the Left front is also a divider of society.

The Left front is also an ideology of violence and anger.

Congressnever spreads anger or hatred and only unites”.

Any division will weaken the country and the state, he said, adding the Congress’ ideologyis the beliefthat all Indians are equal and the country will progress only when it is united.

“…Whateverprogress you see in India today, whatever institutions you see today have all come out of the congress ideology.

The success of India so far has comeas a result of the people of India and the Congress party”,he said.

Attacking theLDF for political violence in the state, he said the Left was time and again killing Congressmen.

“Congress workers will, however, never kill anyone.That’s the difference between us and them,”he said.

Reaching out to the fishing community, Gandhi said he understands their difficultiesand said the LDF government had “back stabbed” them, referring to the controversial Rs 5,000 crore MoU signed by the government with US based firm EMCC over deep sea fishing, against which the opposition had levelled serious charges.

The contract was later scrapped.

Pointing out that unemployment was one of the biggest problems in Kerala, he said the UDF intends to create a skill development platform to retrain youthinto an employable workforce.

“We come with intelligent solutions.

We don’t look at Karl Marx’s book to find these solutions.

We look to you to find these solutions.