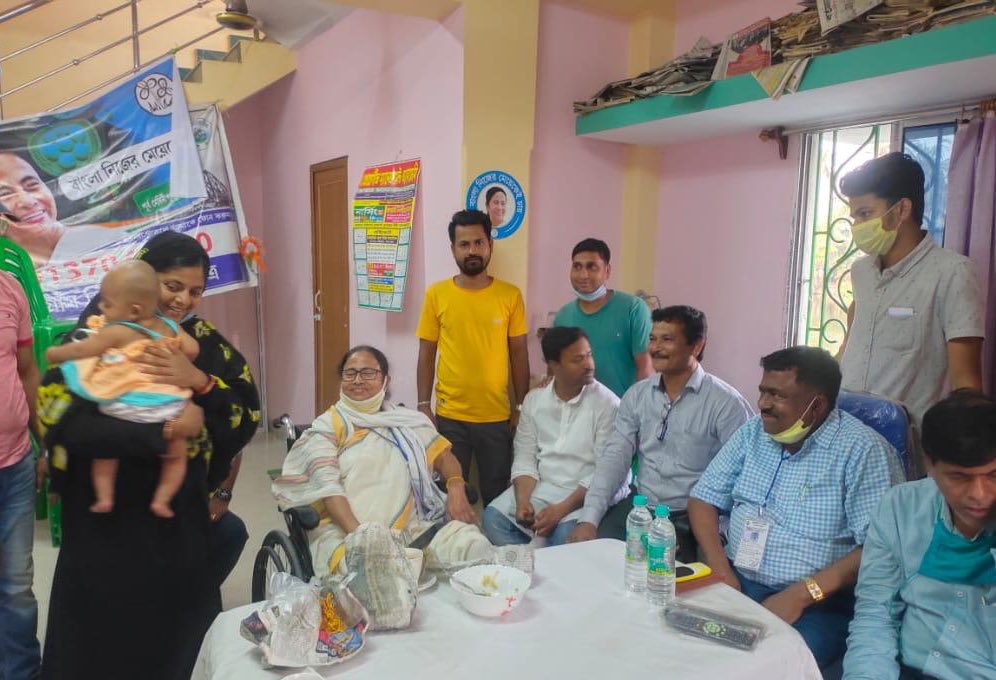 CHUNCHURA: West Bengal Chief Minister Mamata Banerjee Monday asserted that she would win the ongoing state polls despite injury and eventually aim for power in Delhi.
Training her guns at Prime Minister Narendra Modi and Home Minister Amit Shah, Banerjee who is seeking a third term in office said that West Bengal will be ruled by its own people.
Terming herself as a Royal Bengal Tiger, the TMC chief said, West Bengal will not be ruled by anyone from Gujarat.
“I will win Bengal with one leg and Delhi with two legs,” Banerjee said.
The TMC leader said that she suffered injuries, which were allegedly inflicted on her by BJP supporters in Nandigram on March 10, to prevent her from campaigning for the West Bengal assembly polls, a make or break event for both the TMC and the BJP.
However, after going through the report of poll observers, the EC had concluded that the Nandigram incident was an accident and not a planned attack.
Criticising the Central government over Saturday’s naxal attack in Chhattisgarh in which 22 security personnel were killed, the West Bengal chief minister accused the BJP of not governing the country properly and concentrating on West Bengal elections.
Lambasting the BJP for bringing leaders from all over the country, who “are camping in the state to win the elections”, Banerjee said at a public meeting here that the saffron party is fielding its sitting MPs for the assembly polls since it has a dearth of suitable candidates.
The BJP has nominated Locket Chatterjee, its Lok Sabha MP from Hooghly, for the Chunchura assembly seat.
Banerjee, who has been accused by the prime minister of showering abuses on him on different occasions in the run up to the elections, said that she does not care about Modi calling her “Didi..o… didi” in a tone which some TMC women leaders have termed as sarcastic.
“He does this everyday, I don’t care,” Banerjee said.
Questioning the logic behind holding West Bengal assembly elections in eight phases, she said, “It could have been done in 3 or 4 phases.
“Was it not prudent to hold the elections in fewer phases and wrap it up early in view of the COVID-19 situation?” the chief minister asked.
Banerjee also claimed that the coronavirus situation is not grim in the state till now.
The country recorded an all-time high of 1,03,558coronavirus infections in a day pushingthe nationwide COVID-19 tally to1,25,89,067, according to the Union Health Ministry data updated on Monday.
In West Bengal, 1,957 more people had tested positive for the infection on Sunday.
Admitting wrongdoings by sitting TMC MLAs Tapan Majumdar and Tapan Dasgupta of Chunchura and Saptagram respectively, who have been fielded by the ruling party, the TMC supremo asked voters to forgive them and give them an opportunity “as they will not do it again”.
“We will be in big problem if we do not win from Hooghly district,” she said.
The TMC, which had a sway over most of the 18 assembly seats in Hooghly district till the 2016 assembly polls, lost a lot of ground to the BJP in the 2019 Lok Sabha elections.

She claimed that the Centre has refused permission to the TMC government in the state to take over the closed Jessop and Dunlop Industries situated in Hooghly district, leaving thousands of employees of these two companies, in the lurch.