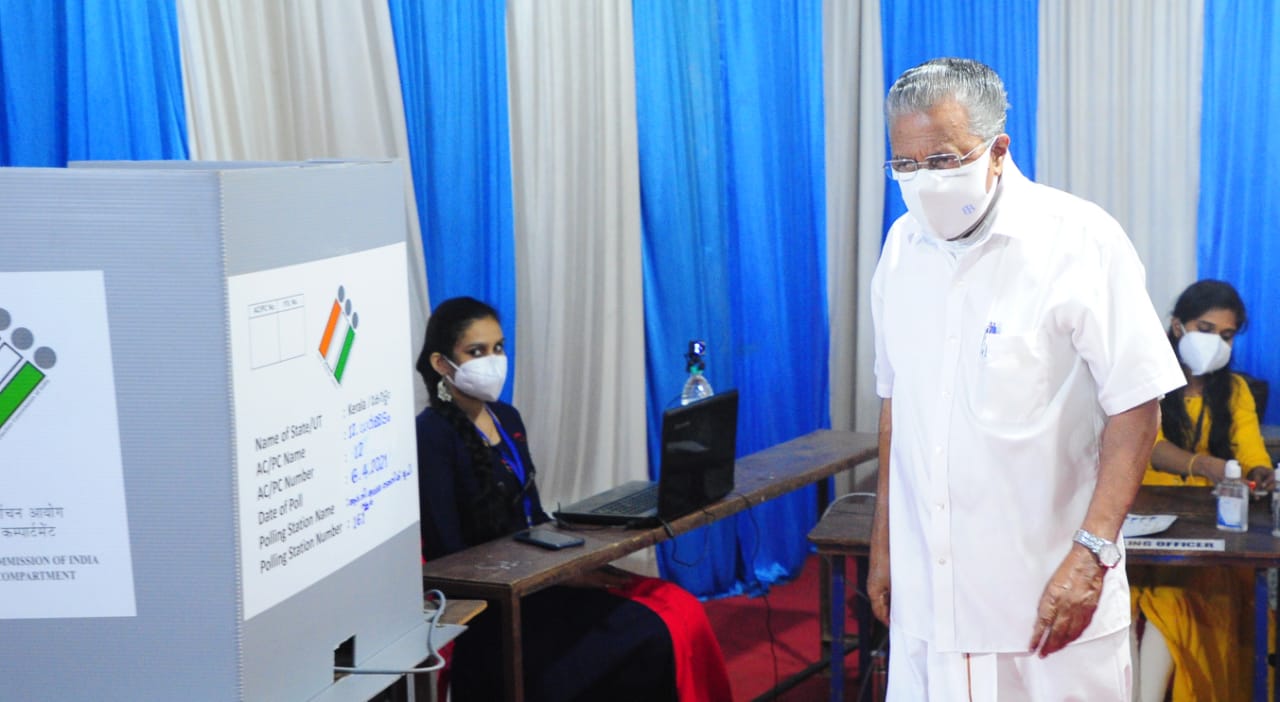 THIRUVANANTHAPURAM: A day after Kerala went to the polls, the CPI(M)-led LDF and its rival, the Congress-headed UDF, on Wednesday were upbeat on forming the government, while the BJP-led NDA expressed hopes of becoming a prominent third front.

Polling to elect 140 MLAs to the 15th Kerala Legislative Assembly was held on Tuesday.

A 74.02 per cent voter turnout was recorded, as per the preliminary assessment by the Election Commission. The final voting percentage is yet to be published.

LDF convener and CPI(M) state secretary in-charge A Vijayaraghavan told the media that the Left front will bag more seats this time.

“The Left Democratic Front will bag more seats than the last time. The Congress-faction will face the worst defeat this time. LDF and Jose K Mani will win the Pala seat. LDF will retain power,” Vijayaraghavan said.

Tourism minister Kadakampally Surendran, who fought a fierce battle at Kazhakootam constituency where the BJP had fielded its firebrand leader Shobha Surendran, claimed the Left front got more votes than expected in Thiruvananthapuram district.

He said once the results are out, it will be clear that the Sabarimala matter was not an issue for the people of the state but development and welfare.

The Sabarimala issue resonated in the run up to polls and also on polling day, with various leaders stating that the outcome will be the result ofthe fight between believers and non-believers,as Chief Minister Pinarayi Vijayan claimed that Lord Ayyappa and other gods were with the LDF.

As the LDF vainly tried to keep the Sabarimala women’s entry issue on the backburner, the opposition kept up the heat on the CPI(M) by vigorously attacking the Left government.

Kerala had witnessed violent protests by right wing activists after the LDF government decided to implement the 2018 Supreme Court verdict, allowing women of all age groups to offer prayers at the hill shrine of Lord Ayyappa at Sabarimala, where traditionally women in the menstrual age group of 10-50 are barred from offering worship.

Surendran, who is also the Devaswom Minister in the incumbent government, claimed the BJP will lose the Nemom constituency, the lone BJP seat in the KeralaAssembly, where the saffron party had put up former Mizoram governor and former BJP state chief Kummanam Rajashekharan as its candidate.

The UDF leaders, on the other hand, have been reiterating that the front will bag enough seats to return to power as the “people have voted for the UDF and against the anti-people rule of the LDF.”

“All the allegations raised by us were true and the people know it.The voting trend of the people shows that they trust the opposition whichhas brought out the corruption and scams in the government,” senior Congress leader Ramesh Chennithala told the media at Haripad.

The BJP-led NDA is hoping to bag at least one to three seats in the state compared to the one it got last time.

Nemom was captured by BJP which fielded veteran leader O Rajagopal in the 2016 elections.

“We will come up as a prominent force in Kerala politics once the election results are out.We will be there in the Assembly as a major correctional force,” BJP state chief K Surendran said at a press conference in Kozhikode.

The BJP got one seat while an independent P C George, won one.