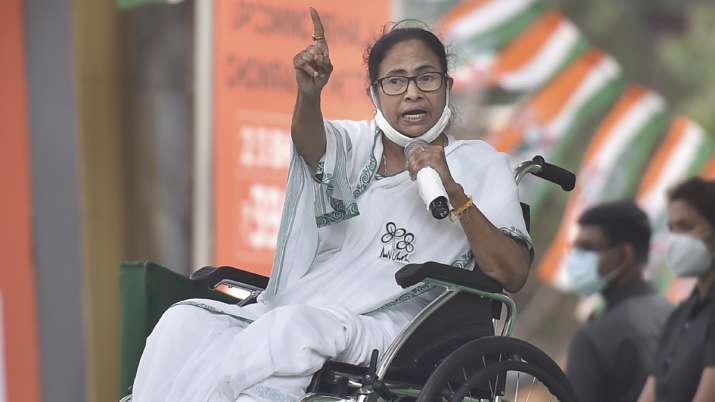 GALSI/ KATWA/ PURBASTHALI: A day after a purported audio-tape -in which she is heard proposing a rally with the bodies of Cooch Behar firing victims- surfaced, West Bengal Chief Minister Mamata Banerjee on Saturday alleged that her phone is being tapped and said she will order a CID probe into it.

Banerjee also exuded confidence that the Trinamool Congress will form the government in West Bengal for the third consecutive term with a two-thirds majority.

Addressing an election rally at Galsi, she accused the BJP of being involved in the audio clip conspiracy as the saffron party “cannot match” the ruling Trinamool Congress’ campaigning on development programmes.

“They (BJP leaders) are even eavesdropping on our everyday conversation. It seems they are tapping our phone calls on cooking and other household chores.

“I will order a CID probe into it and not spare anyone involved in such snooping activities. I have already come to know who is behind this,” the TMC supremo said.

Banerjee also claimed she has information that the “central forces are being involved in such acts with some agents”.

“It is clear that the BJP is behind it though they claimed they have no role in it,” she said.

A controversy erupted on Friday after the BJP released the purported audio clip in which Banerjee is heard telling the Trinamool Congress nominee of Sitalkuchi to hold rallies with bodies of the four persons killed in CISF firing during polling on April 10.

Claiming that such a conversation never took place, the TMC had described the audio clip as “bogus” and wondered whether the Centre was tapping a chief minister’s phone.

Launching an attack on the Election Commission (EC) for not clubbing the remaining three phases of the ongoing assembly elections, she accused the poll panel of “paying heed” to the demands of the BJP.

“You (EC) have curtailed the campaigning hours, and in the name of COVID-19 restrictions, you are doing whatever the BJP demands,” the chief minister said.

Worried over the COVID-19 surge, Banerjee had on Thursday urged the Election Commission to think about conducting polls for the remaining assembly seats at one go, while stressing that her party had opposed the prolonged eight-phase poll schedule.

The EC has curtailed the time for campaigning till 7 pm. Earlier, it was up to 10 pm.

The poll panel also extended the silence period by a day -from 48 hours to 72 hours before each of the remaining three phases of the elections to be held on April 22, 26 and 29 respectively.

“Street meetings are usually held in the evening hours in summer. The decision was taken purposely to reduce the number of my campaign meetings,” Banerjee said.

She also alleged that the EC is “favouring” the saffron party so that Prime Minister Narendra Modi and Home Minister Amit Shah can address their poll rallies.

The chief minister once again blamed the BJP for bringing “outsiders” during campaigning and for exacerbating the COVID-19 situation inthe state.

“The pandemic situation was not as alarming in Bengal like Gujarat or Uttar Pradesh. But the sudden surge in coronavirus cases is due to the inflow of outsiders who came to the state without conducting RT-PCR tests,” she said.

She flayed the prime minister for not acting on the state government’s suggestion to vaccinate every citizen in the past six months when the spread of the virus was much less.

“This has led to the present situation when walls are being raised in Lucknow to hide the view of cremation of bodies and the pandemic took a heavy death toll in Gujarat,” the TMC chief alleged.

She accused Modi and Shah of making a false promise to extend financial aid to members of the Matua community and said, “They have done nothing for backward castes and Dalits”.

Accusing the two BJP leaders of “peddling lies” at poll rallies, the TMC supremo said, “They are saying that we are making false promises. We are running the Kanyashree project and beneficiaries are getting the aid. Can he explain what happened to the PM CARES fund? Who benefitted from demonetisation?”

Urging central security force personnel not to “fall into the trap of BJP leaders,” Banerjee said at a meeting in Katwa, “why should you listen to what BJP leaders say? We have great respect for you. Please maintain impartiality, you give us security.”

Alleging there were instances of BJP leaders sharing lunch with central forces, Banerjee urged the forces “please don’t fall into the trap of BJP.”

Without mentioning the incident at Sitalkuchi on April 10 when CISF personnel opened fire in “self-defence” allegedly after coming under attack from locals, Banerjee said “If any BJP leader asks you to fire at people, don’t be swayed by the provocations. If cases are framed against you, you have to return here to attend to the cases. Do your job impartially.”

The chief minister said at another meeting in Purbasthali that “the BJP will be handsomely defeated and the TMC will secure two-thirds majority in the assembly polls”.

Banerjee said, Modi and Shah are “spreading lies” about the states performance when it has been applauded internationally for its Kanyashree project, and nationally for the implementation of 100 days work project and for its governance parameters.

Banerjee dubbed the BJP government at the Centre as “anti-farmer” and said the TMC government has already purchased 45 lakh metric tonne rice from ploughmen.

“In contrast, the Modi government has purchased only a token amount from farmers and conspired to leave them at the mercy of big corporates as evident in the farm bills triggering nationwide protests,” she said.