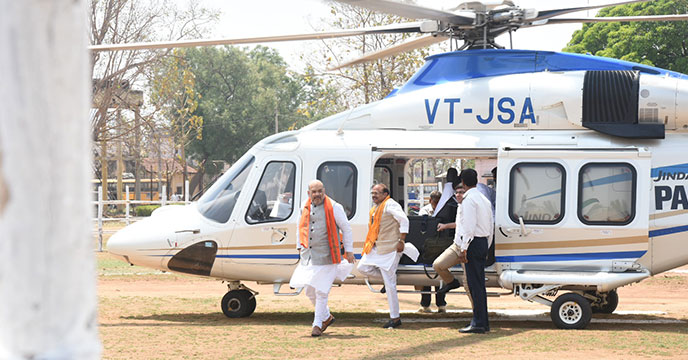 KOLKATA: West Bengal is reeling under an acute shortage of Covid-19 vaccines amidst a dreary long eight-phase assembly election, but leaders campaigning here have already spent Rs 100 crore to fly around to pitch for votes.

At least 90 per cent of this spending can be traced to BJP because their star campaigners like PM Modi, Home Minister Amit Shah, BJP president J.P. Nadda and minister Smriti Irani are from outside the state.

Chief Minister Mamata Banerjee and a select few in Trinamool Congress have flown around, specially to North Bengal.

“But this is mainly because Didi is injured and long travels by road impacts on her leg. We don’t have the kind of funds the BJP has mobilised, so we have used helicopters sparingly,” said Trinamool MP Kakoli Ghosh Dastidar.

BJP leaders justify the expenses on air travel as ‘unavoidable’ in a fierce election battle like West Bengal.

“Tagra larai me goli jyada lagta hai”, (you need more ammunition in a fierce battle) said a BJP state unit office bearer on condition of anonymity as he was not authorised to speak to media.

A 7-seater Eurocopter charges Rs 2 lakh per hour and a senior leader ends up campaigning for five hours, runs up a bill of Rs 10 lakh. Add the parking and waiting charges and those for post evening charges, a senior leader can end up spending Rs 15 to 20 lakh for air-hop campaigns.

Statistics garnered from Calcutta, Andal and Bagdogra airports points to a total gross spending of Rs 98.73 crore so far on use of helicopters and light aircrafts from Match 15 to April 20.

At lest 92 per cent of this spending is by the BJP, 7 per cent by Trinamool Congress and the remaining one per cent by others.

Left Front leaders have not used air travel within the state.

“Only our senior leaders have paid for air travel to reach Bengal from outside but none used exclusive facilities. They travelled in flights with common passengers,” said CPI-M spokesperson Debashis Chakrabarty.

Out of power in Bengal for 10 years, the Left is forced to spend carefully.

“BJP poll strategy this time resembled carpet bombing by top leaders in maximum possible number of meetings. For that, heli-hopping is a must,” he said.

Stakes are high for political parties in West Bengal this time, making it the most expensive elections in the state’s recent memory.

State police and enforcement branch have reported seizure of nearly Rs 250 crore in cash, liquor and other gifts linked to polls in the last two months.

Amid the ongoing West Bengal assembly elections, cash and other items worth Rs 248.9 crore has been seized till now in the state, said the additional chief electoral officer Sanjoy Basu.