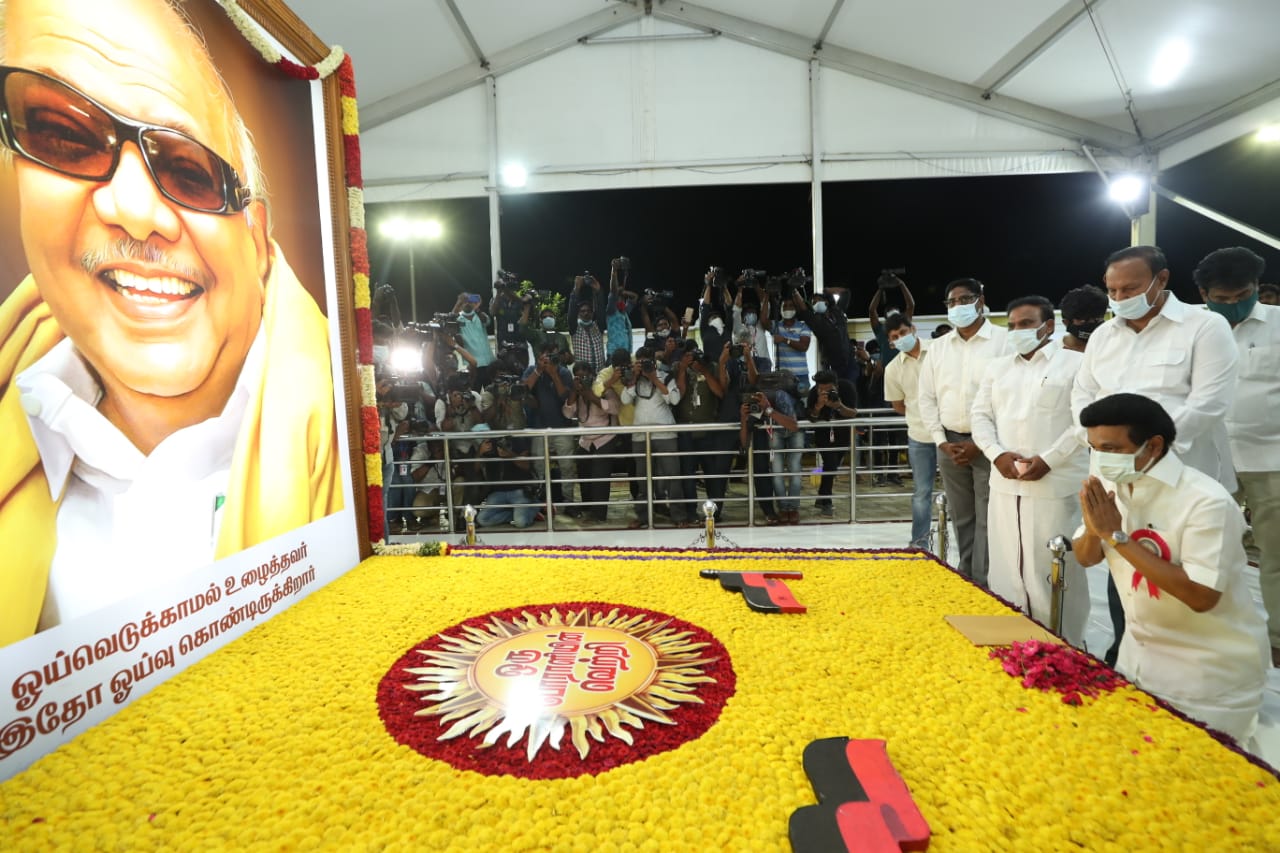 NEW DELHI: After a decade in opposition, the DMK won a convincing victory over arch-rival AIADMK in Tamil Nadu and the ruling party managed to emerge as a formidable opposition, overcoming the burden of ten-year anti-incumbency to an extent.

M K Stalin, the 68-year-old DMK president, is all set to become the Chief Minister for the first time. During his party’s previous tenure, he has been the Deputy Chief Minister and Local Administration Minister as well.

As counting of votes polled in the April 6 TN Assembly election progressed on Sunday, it became amply clear that the DMK was dislodging the AIADMK from the seat of power. Prime Minister Narendra Modi thanked Tamil Nadu people who voted for the National Democratic Alliance and said his party would continue to work for state’s welfare and nurturing Tamil culture. “I laud our workers who worked hard,” he added.

Round after round, the DMK and its allies improved their tally and the Stalin-led party together with its partners, appeared to win at least 155 seats in the 234-member Assembly while 118 seats is the minimum number required for a simple majority.

The Election Commission is yet to declare winners for all the 234 segments and also complete data on the winning margin was not available, till 10 pm, Sunday.

The DMK’s vote share was 37.7 per cent with an impressive performance in regions including southern and northern regions while the AIADMK sliced away 33.4 percent and also demonstrated that the Kongu belt of Coimbatore was still its bastion. DMK is poised to win at least 131 seats and several of its allies like Vaiko-led MDMK and Tamizhaga Vazhvurimai Katchi leader Velmurugan contested on the ”Rising Sun” symbol of the party.

AIADMK, as per trends, is set to emerge victorious in 70 seats and its allies, the PMK and BJP were ahead in five and four constituencies and together, the combine may touch the 79-seat mark. For the DMK, it was a dream come true moment and in sync with its election song, ”Stalin thaan vararu,” which meant Stalin is going to become the Chief Minister.

In addition to making a slew of corruption allegations against the AIADMK, the DMK staunchly opposed the BJP and claimed that if the AIADMK won, it would mean a victory for the Saffron party. DMK cadres went ecstatic, burst crackers and distributed sweets in party headquarters ”Anna Arivalayam” here apparently in violation of Covid-19 guidelines.

Police said Teynampet inspector in charge of law and order has been placed under suspension for his “lackadaisical attitude and dereliction of duty” and not ensuring compliance of EC’s instructions in this connection. DMK’s major ally the Congress was ahead in 16 seats, Viduthalai Chiruthaigal Katchi in four constituencies and the two Left parties in two segments each. Pollsters had predicted anywhere between 160 and 190 seats for the DMK alliance and from 38 to 68 constituencies for the AIADMK.

Stalin in his poll rallies had expressed confidence that his party-led front would emerge victorious in all the 234 segments. In 2006 Assembly polls, when the AIADMK lost, it had managed to bag only 61 seats and the DMK won 96 seats and its key ally Congress 34.

In 2016, AIADMK won 136 seats and DMK and its ally Congress won 89 and eight seats. Top officials including Chief Secretary Rajeev Ranjan and Director General of Police J K Tripathy called on Stalin and greeted him.

Top actors Rajinikanth and Makkal Needhi Maiam chief Kamal Haasan were among those who extended their best wishes to Stalin on his party’s victory. The counting exercise was delayed in some constituencies including Dharapuram and Viralimalai due to some issues which officials did not elaborate. Prominent winners include DMK president M K Stalin (Kolathur) and his son and party youth wing secretary Udhayanidhi Stalin (Chepauk-Triplicane).

The top two AIADMK leaders, outgoing Chief Minister K Palaniswami and Deputy CM, O Panneerselvam romped home from their respective segments of Edappadi (Salem district) and Bodinayakanur (Theni). AIADMK Twitter handle said the CM has won by a margin of ”92,868 votes” trouncing his DMK rival T Sambath Kumar, and the margin appeared to be the biggest in the state.

In Coimbatore South, Makkal Needhi Maiam chief Kamal Haasan had to contend with a neck and neck fight, initially with Congress nominee Mayur Jayakumar and then BJP’s Vanathi Srinivasan and she is likely to win from this segment, as per trends.

From a minimum of 13 to a maximum of 43 rounds, the duration for completion of the counting exercise varied in each of the 234 Assembly segments. AIADMK’s expelled leader and Amma Makkal Munnetra Kazhagam chief TTV Dhinakaran was behind his rival, AIADMK leader and Minister Kadambur C Raju in Kovilpatti. Ministers including D Jayakumar, K Pandiarajan, P Benjamin, K T Rajenthra Bhalaji and Vellamandi N Natarajan were trailing.