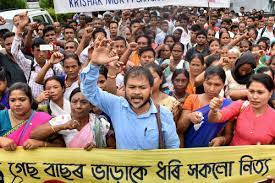 GUWAHATI: Jailed anti-CAA activist and prominent peasant leader Akhil Gogoi has become the first lawmaker in Assam to win an election from jail after his octogenarian mother and prominent rights leaders of the country campaigned for him.

The founder president of the newly floated Raijor Dal (RD), Gogoi was arrested in December 2019 on sedition charges after he spearheaded the massive protests against the Citizenship (Amendment) Act (CAA) in Assam.

The weeks long violent agitations against the CAA had rocked Assam in which five people were killed in police firing.

The National Investigation Agency (NIA) took up Gogoi’s case for his alleged involvement in the violent anti-CAA demonstrations across the state.

Besides the Raijor Dal, the Assam Jatiya Parishad (AJP) was also formed as a consequence of the anti-CAA agitations.

Both the parties in alliance had fielded over 100 candidates across Assam, but only Gogoi has emerged victorious.

An inmate of the Central Jail in Guwahati, Gogoi is currently undergoing treatment at the Gauhati Medical College and Hospital.

Gogoi’s 84-year-old mother Priyoda Gogoi and son Nasiketa had spearheaded his election campaign before the first phase of elections in eastern Assam on March 27.

Rights activist Medha Patkar, Magsaysay award winner Sandeep Pandey, many students of Delhi’s Jawaharlal Nehru University and intellectuals and activists from different parts of the country and Assam had come to Sibsagar campaign for Gogoi.

Hundreds of volunteers and members of the Raijor Dal took Priyoda Gogoi to the doorsteps of the voters and heavily campaigned against the new citizenship act, which was approved in the Parliament in 2019, granting automatic citizenship for non-Muslims from Bangladesh, Pakistan and Afghanistan, who came to India before December 31, 2014.

Gogoi, who is also an RTI activist, wrote several open letters from the prison in a bid to reach out to the voters, highlighting the numerous problems of Assam which need to be solved with sincere efforts.

“Cross section of people besides women and youth were moved when the ailing mother of Gogoi campaigned for his jailed son along the narrow lanes of Sibsagar,” Raijor Dal leader Bijay Sarma told IANS.

Despite the entire election machinery of the BJP and the Congress, including the top leaders from these two outfits, the jailed activist has managed to win the hearts of the electorate.

A graduate from Guwahati Cotton College, Gogoi had earlier served as the general secretary of its students’ union in 1995-96.

Over the years, the anti-corruption crusader, who also headed the Krishak Mukti Sangram Samiti (KMSS), spearheaded many agitations on numerous causes.

Gogoi had fought for land rights of indigenous Assamese people and led a state-wide movement against the construction of big dams in northeastern Assam harming the ecological aspects.

Dozens of cases have been slapped on him by successive state governments in Assam.

“As Akhil Gogoi always highlighted and campaigned for the basic issues and problems of the indigenous people, common voters and citizens considered him as their genuine representative,” Sukanya Talukdar, a college student, told IANS.