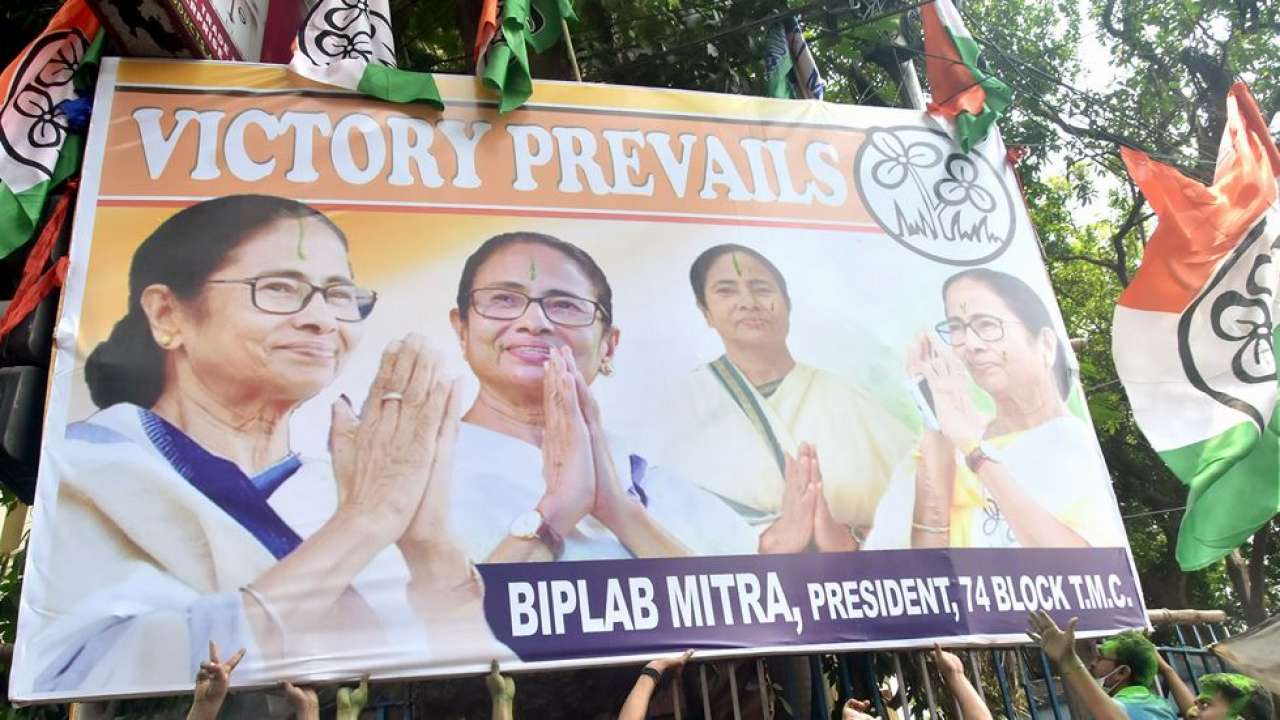 NEW DELHI: Mamata Banerjee steamrolled the BJP election war machine as she powered the TMC to a two thirds majority in the assembly elections and secured a third straight term in office in West Bengal, the longest-standing opposition fortress in the country.

The mercurial leader, however, lost by 1956 votes in Nandigram to former protege-turned-BJP adversary Suvendu Adhikari.

Elections were held in 292 constituencies of the 294- member assembly. Polling was countermanded in two constituencies after candidates fell victim to a raging COVID-19 pandemic.

“It’s a victory for Bengal’s people…it’s Banglar joy’ (Bengal’s victory),” Banerjee told TMC workers, while her party approached the Election Commission with demand to order recounting of votes in Nandigram which was rejected.

Though the BJP failed in its effort to dislodge Banerjee from power, it’s for the first time that it will be the main opposition party in the state assembly, rising from a measly three seats in 2016 to at least 76 now.

It is also for the first time that the Left and the Congress, which ruled the state for decades, will have no representation.

In the run up to the elections, the BJP had Banerjee on the defensive by aggressively campaigning against corruption allegedly involving TMC leaders and the ‘cut money’ (bribery) culture affecting everyday life of people.

The party also tried to gain traction with its Hindutva pitch as slogans of “Jai Shri Ram” reverberated at rally venues and leaders tried to openly woo the Dalit Matua and Rajbongshi communities.

Just when she appeared to be losing ground, Banerjee shifted gear and coined the slogan ‘Bangla nijer meyekei chay’ (Bengal wants her daughter). Banerjee raking up the insider- outsider debate was part of the strategy to appeal to Bengali subnationalism, something hitherto alien to West Bengal politics.

Banerjee’s appeal to ‘Bangaliana’ (Bengaliness) cultural identity, which transcends divisions of caste and religion, seemed to have worked in her favour.

The ‘Duare Sarkar’ (government at your doorstep) programme under which benefits of a host of welfare schemes, including scheduled caste certificates, were delivered to the homes of the beneficiaries, also boosted her standing among the poor.

The West Bengal government’s UN award winning ‘Kanyashree’ programme, where money is transferred to the bank accounts of girls so they could study further and early marriages could be prevented, was highlighted during the campaign.

The strategy to extend the ‘Swasthya Sathi’ health insurance scheme to the entire population in December 2000 was welcomed by all. The scheme was launched by Banerjee in 2016. It is a basic health cover for secondary and tertiary care up to Rs five lakh per annum for every family.

Months ahead of the elections, the Banerjee government transferred Rs 10,000 each to 9.5 lakh students in class 12 government schools to help them buy computer tablets and mobile phones for online classes. But, for many families, it came as relief amid economic hardships triggered by the lockdown.

She promised that women heads of 1.6 crore households will receive basic income benefit under which women of general category will get Rs 500 monthly allowance and those of Scheduled Caste and Scheduled Tribe Rs 1,000. She said it was pocket money for the women who otherwise have to depend on their husbands.

Another factor that went in her favour was the near total consolidation of Muslim votes in favour of the TMC.

Parties such as the AIMIM and Abbas Siddiqui’s ISF, which were seen as having the potential to deal a blow to the TMC’s minority support base, failed to make an impression as the minorities threw their weight behind Mamata Banerjee.

The prime minister’s repeated taunts of “Didi, O Didi” in his speeches, too, did not go down well with voters in a state where women traditionally enjoy a high social and economic status and are a major vote bank for the TMC.

The clincher for Banerjee came when she mounted an aggressive assault in the last three phases of polling on Prime Minister Modi for leaving India unprepared for the second COVID wave.

She went on to blame an influx of “outsiders brought by the BJP” for the spread of the pandemic in the state, and the saffron party suddenly found itself trying to defend itself against charges of mismanagement of the COVID-19 crisis.

The victory for Banerjee, by far the biggest mass leader since the redoubtable Jyoti Basu who ruled West Bengal with an iron fist from 1977 to 2000, will not only help fortify her position in the state but also enhance her standing at the national level where voices from the opposition are getting feeble with time.

Speculation is rife already that Banerjee, who reached out to several national and regional parties opposed to the BJP a few months ago, will now try to forge a common front with them to mount a challenge to the saffron party in the 2024 general elections.