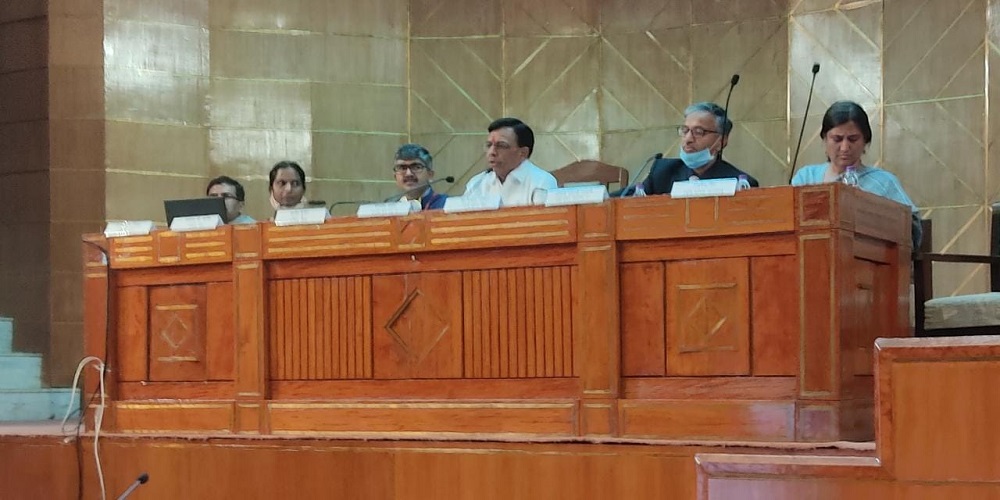 NEW DELHI: No new tax was proposed in Madhya Pradesh’s Rs 2.79 lakh crore budget for 2022-23 presented in the Assembly on Wednesday, while Finance Minister Jagdish Devda made substantial allocations for infrastructure at Rs 42,128 crore, for health at Rs 19,405 crore besides Rs 32,843 crore for education in the next fiscal.

For the first time, the state government presented a ‘child budget’ as part of the annual financial plan, allocating Rs 57,800 crore for 220 schemes under 17 departments, including education, targeted at children aged below 18. The budget for 2022-23 proposed total appropriation of Rs 2,79,237 crore, nearly Rs 37,500 crore more than the previous fiscal, Devda said.

The Finance Minister said the estimated fiscal deficit was Rs 52,511 crore, which is 4.56 per cent of the Gross State Gross Domestic Product (GSDP). Claiming that the budget provides relief to the people of the state during the coronavirus pandemic, Devda said it aims at implementation of government schemes in a mission mode for an “Aatmanirbhar (self-reliant) Madhya Pradesh.

The budget allocated Rs 42,128 crore for the infrastructure sector covering power, roads and water, among other segments, Rs 41,038 crore for urban and rural development (including Panchayat department), Rs 32,843 crore for education, Rs 20,027 crore for the agriculture sector and Rs 19,405 crore for health.

About 47 per cent of the total revenue receipts will be spent on salaries, pensions and payment of interests on loans taken by the government, Devda said. He said the state government has proposed construction of 3,000-km-long roads in the next fiscal besides renovation of 1,250-km-long pathways and construction of 88 bridges.

Similarly, 1,200-km-long roads will be built under the Prime Minister Rural Road Scheme. Allocation for the power sector was increased by 30 per cent to Rs 23,255 crore in the next FY, he said. An amount of Rs 142 crore was allocated for making arrangements of providing on-the-spot treatment to ailing or injured cattle using veterinary vehicles, he said.

Devda read out his entire budget speech amid slogan shouting by Congress legislators who trooped into the Well of the House. Congress MLAs criticized the MP government for its “failure” to address issues like unemployment, rising crime against women and farmers woes, among others, and shouted slogans throughout the budget speech. Madhya Pradesh Chief Minister Shivraj Singh Chouhan hailed the budget, saying it has taken care of people from all segments of the society. The budget for FY 2022-23 was aimed at building an ‘Aatmanirbhar Madhya Pradesh’ and it was prepared after incorporating common people’s suggestions, he said.

The budget has provisions for all segments of the society and takes a balanced approach towards development of every region of the state, the CM said. It has provisions for housing for the poor, children’s education, drinking water, public health and also farmer welfare, Chouhan said.

“The budget will ensure a bright future of children as it has made a provision of Rs 57,803 crore for their health, nutrition and education,” Chouhan said.

Terming the budget as “misleading” and a “bundle of lies”, Leader of Opposition and former chief minister Kamal Nath of the Congress said it seeks to “cheat” the people of the state. Budget provisions have been made only on paper to show “false dreams” to people keeping in mind the 2023 Assembly polls, he said.

There are no details on how schemes were implemented as per provisions made in the last budget, how many people got employment, what they have done for farmers, especially in terms of providing fertilizers and seeds,” Nath said. He also took potshots at the CM.

“The budget has nothing for any section of the society. Under Shivraj’s regime, milk and edible oil have become costly, while liquor has become cheap… this is the crux of this budget,” the Congress MLA said.