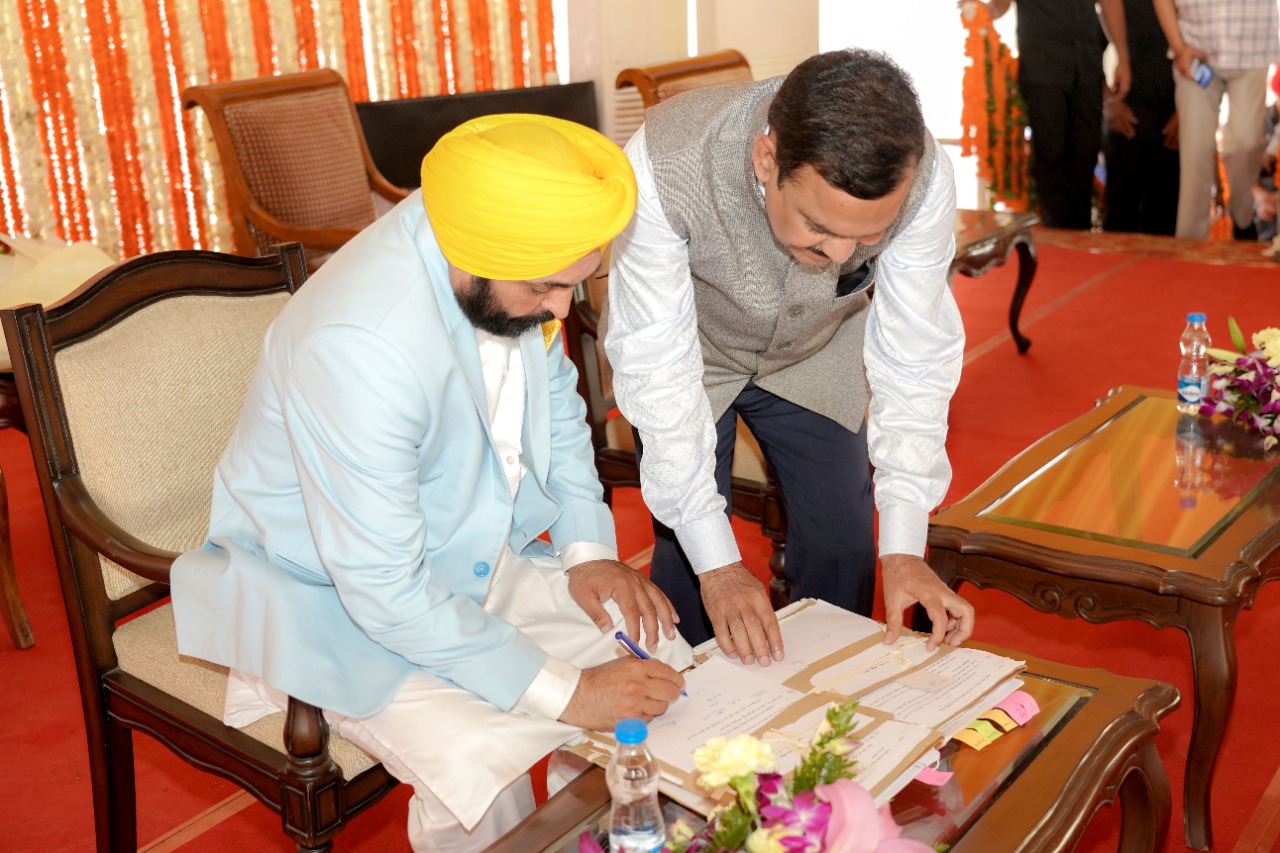 NEW DELHI: AAP leader Bhagwant Mann was sworn in as the Punjab chief minister on Wednesday.

The AAP romped home winning 92 seats in the 117-member Punjab Assembly, decimating the Congress and the SAD-BSP combine.

Won’t waste a single day, Mann promises Punjab after being sworn in as CM

Mann took oath Wednesday as Punjab chief minister at a ceremony thronged by tens of thousands of people in freedom fighter Bhagat Singh’s village, where he promised to fight unemployment and corruption in the state.

The work will start from today itself. We will not waste even a single day. We are already late by 70 years, he said at the public meeting at Khatkar Kalan village in Shaheed Bhagat Singh Nagar district. Later in the day, he assumed charge at his office in Chandigarh.

Mann, a former comedian, advised humility to Aam Aadmi Party volunteers. There should not be any report saying they have become arrogant, he said.

He was the only one to take the oath at the event where many people in the crowd and on the dais, sported turbans and ‘dupattas’ in yellow – the Basanti colour often associated with Bhagat Singh. Rang de Basanti, an iconic song evoking Bhagat Singh’s sacrifice, played at the venue.

Other members of the cabinet will be sworn in later as the AAP seeks to fulfil the massive mandate it got in the Punjab Assembly polls. The party, now in power in a second state — after Delhi where national convenor Arvind Kejriwal is the chief minister – won 92 of the 117 seats.

Parties like the Congress, the Shiromani Akali-Bahujan Samaj Party alliance and the combine of Amarinder Singh’s Lok Congress Party and the BJP were decimated by the AAP wave.

Arvind Kejriwal and ministers from his Delhi cabinet, including Manish Sisodia and Satyendar Jain, attended the event in yellow turbans. Newly elected AAP MLAs too participated.

Punjab Governor Banwarilal Purohit administered the oath of office and secrecy to 48-year-old Mann, who went through it in Punjabi.

Prime Minister Narendra Modi congratulated the new CM. Will work together for the growth of Punjab and welfare of the state’s people,” he tweeted. Tamil Nadu Chief Minister M K Stalin and his Odisha counterpart Naveen Patnaik were among the others who felicitated him.

Though the crowds had started collecting at the village from the morning, the oath-taking scheduled for 12.30 pm was delayed by nearly an hour.

Mann raised ‘Inqlab Zindabad’, ‘Bharat Mata ki Jai’ and ‘Bole So Nihal’ slogans before beginning his short speech, in which he promised to tackle unemployment, corruption and farmers’ problems.

He said the condition of the state’s schools and hospitals will be improved, like it has been done by the AAP government in Delhi. People from abroad will come to Punjab to see them, just as they do in Delhi, he said.

He also touched upon the migration of the youth from Punjab to seek jobs abroad.

Gurdas Mann, Karamjit Anmol, singer-turned-politician Congress MP Mohammad Sadique and Amar Noorie were among the singers and artistes who attended the swearing-in.

Mann had a successful career as an entertainer. He was on TV shows like The Great Indian Laughter Challenge, acted in movies and brought out video albums.

He has been a Lok Sabha MP twice from Sangrur, and the 2022 polls marked his assembly election debut. The Punjab AAP president won from Dhuri, an assembly segment in Sangrur parliamentary constituency, by a 58,000 votes.

Mann said the swearing-in ceremonies earlier used to take place at cricket stadiums or the Raj Bhavan.Now this oath-taking ceremony is being held at villages of martyrs.

Bhagat Singh had dreamt of freedom and the AAP is fighting to take that freedom to the common people, he added.

He said the martyr was worried in whose hands the reins of the country will go after freedom. His concern proved right, Mann said.

He said people of Punjab created history by giving such a huge mandate to the AAP, predicting that it will feature in the future in the syllabus of educational institutes.

The crowd raised slogans like ‘Inqlab Zindabad’ and ‘Bole So Nihaal’ in the surcharged atmosphere at the rally, where Mann had invited the people of the state, saying the three crore people of Punjab will also take oath with him.

Kejriwal called it a big day for Punjab. In this golden morning of new hope, the entire Punjab will today come together and take a pledge to make it a prosperous Punjab, he tweeted before the ceremony.

A supporter, who came from his Satoj village, said, We have high expectations from him and he will definitely live up to them. The way Kejriwal did good work in Delhi, Mann will also do the same in Punjab.”

Congress leader Manish Tewari took a swipe at his own party, flagging on Twitter the invite he got from the AAP to attend Mann’s swearing in when he did not get one when Charanjit Singh Mann took over as CM last year.

Tiwari, however, did not attend as Parliament was in session.

In this article:AAP, Bhagwant Mann, Punjab