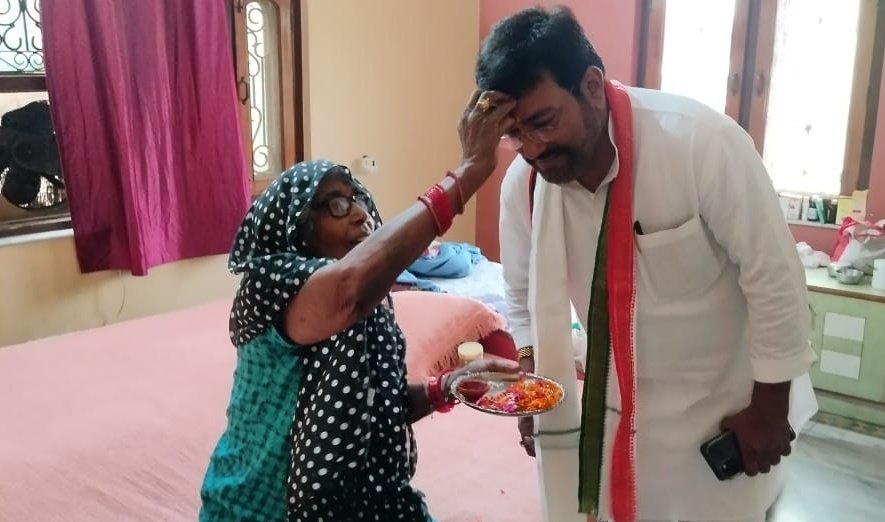 LUCKNOW: Buoyed by the response to the Congress’ Bharat Jodo Yatra, newly appointed Uttar Pradesh party chief Brijlal Khabri has hailed Rahul Gandhi by saying “Rahul means Bharat, and Bharat means Rahul”, and asserted his aim is to “save” the country and the Constitution.

His remarks in an interview with the PTI on Friday was a reminiscent of former Congress president Dev Kant Barooah’s famous “India is Indira, Indira is India” utterance, which the party’s rivals have often used to criticise the Congress and the Gandhi family.

Khabri parried queries on why the Bharat Jodo Yatra is scheduled to pass through just one district (Bulandshahr) in the politically crucial state of Uttar Pradesh, saying, “Bharat is not a district nor it is a state. It is an union of states. He is covering 13 states, and has set a big aim.”

He lambasted the BJP government for “trying to sell the country and abolish the Constitution”.

He also said the Congress was “targeting to win all the 80 Lok Sabha seats in UP in the 2024 general elections”, and warned the BJP it would lose deposits in Rae Bareli, which is currently represented by Sonia Gandhi, and Amethi, which Rahul Gandhi lost to Smriti Irani of the BJP in 2019.

Khabri, who was earlier with the BSP, was recently appointed the state Congress chief and he assumed charge on Saturday.

“The present government is trying to sell the country and abolish the Constitution. Democracy is being murdered. To save these three, if Rahul Gandhiji has undertaken the foot march, why are these people getting pain in their stomach?” he said.

The BJP was rattled because Rahul Gandhi is uniting this country “which will end their ‘roji-roti’ (bread and butter)”, he said.

“Today, Rahulji has geared up to save the country, and lakhs of people are walking with him. I can say ‘Rahul maane Bharat, aur Bharat maane Rahul’ (Rahul means Bharat and Bharat means Rahul),” Khabri asserted.

He also said the party’s “planning and strategy” to improve its performance in the state will soon be seen on the ground.

On the BJP eying the Congress’ bastion of Rae Bareli, he said, “However much the BJP tries, they will find it difficult to save their deposits in Rae Bareli as well as in Amethi. We are targeting to win all the 80 Lok Sabha seats in Uttar Pradesh in the 2024 general elections.”

However, when he was asked if Sonia and Rahul Gandhi will contest from Uttar Pradesh, the state party president said, “This is a matter of time. They are (senior) leaders, they will contest from the seats they want to.”

On whether he would like Priyanka Gandhi Vadra to contest from Rae Bareli, in case Sonia Gandhi opts out, Khabri said, “I will always say that Priyanka ji should come forward (and contest), and if she does so, she will definitely win.”

He said the decision on any possible alliance will be taken by the party’s central leadership.

He hit back at state BJP chief Bhupendra Singh Chaudhary’s recent statement that Rahul Gandhi should have conducted his Bharat Jodo Yatra in Pakistan, saying “The BJP has always been giving such statements to create a Hindu-Muslim divide. As soon as the conspiracy of the BJP to divide India was unveiled, Rahul Gandhi ji started the work of uniting India.”

Along with Khabri being appointed as the president of the UP Congress, six regional presidents were also announced by the party.

“This (the new arrangement) will give strength (to the party), as everyone will discharge their responsibilities, and work together,” he said, rejecting suggestions that this system was inspired by a similar arrangement in the BJP. “And, politics is a type of laboratory. Our main target is to save the country, the democracy and the Constitution.”

He also claimed the Samajwadi Party’s improved performance in the 2022 elections in the state was a mere “coincidence”.

“The BJP won the UP Assembly elections by resorting to the Hindu-Muslim (narrative), while the SP came second. In a way, the BJP got benefit of doubt (in voters’ mind), as people wanted to remove the BJP, but then who would have tolerated the goondaism (of the SP)?”

He also railed against Suheldev Bharatiya Samaj Party (SBSP) chief Om Prakash Rajbhar, who was a BJP ally before joining hands with the SP for 2022 polls, and then also came out of this alliance as well.

“Politicians of these types are like weeds (‘kharpatwar’) that crop up during rains, and attract attention. But, the moment someone touches them, they may get fungal infection.”

“They first create caste-based organisations, and when they get going they leave others for selfish reasons. This also includes the BSP.