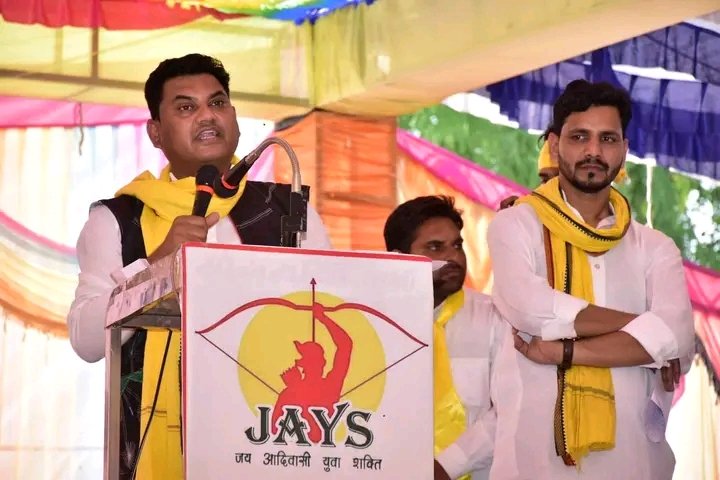 BHOPAL: Though Assembly elections in Madhya Pradesh are a year away, a tribal outfit has announced plans to fight the polls under its own banner and set a target of winning 80 out of the total 230 seats to have a say in formation of the next government.

Though not yet a major politico-social force in MP, whose politics has been dominated by the Congress and the BJP, JAYS is banking on consolidation of votes in its favour in Assembly seats reserved for Scheduled Tribes (STs) and also in segments where adivasis have a sizeable presence.

JAYS national patron and Congress MLA from Manawar (ST) in Dhar district Dr Hiralal Alawa has said his organization wants to send young lawmakers to the Madhya Pradesh Assembly and the Lok Sabha.

“There are a total of 47 seats reserved for ST candidates and 35 earmarked for nominees from Scheduled Caste (SC) communities in the state.

“In order to send maximum number of young leaders from these constituencies, JAYS has decided to field candidates under its own banner for the 2023 Assembly polls in Madhya Pradesh,” Alawa told PTI.

Besides, in 35 general category seats, the number of tribal voters ranges from 50,000 to 1 lakh and they play a decisive role in poll outcome in these constituencies, he said.

Madhya Pradesh has a 230-member Assembly and Alawa maintained his group is targeting to win 80 seats to able to play the role of “kingmaker” and decide who forms the next government.

He, however, did not say how many seats his outfit will be contesting.

The tribal leader, who holds MBBS and MD degrees, said JAYS candidates will fight the polls as independents, but under the banner of the organization.

“Depending upon the number (seats) that we get and if that number is crucial for formation of a Congress or a BJP government, we will demand our share of power on the basis of our strength.

“We can even seek the post of chief minister as both parties are dependent on our (tribal) votes in a major way,” Alawa said.

JAYS had organized a ‘Mahapanchayat’ on October 20 in Kukshi tehsil of Dhar district where more than 20,000 young tribals from across the state were present in what was a show of strength by the outfit.

“In the Lok Sabha polls due in 2024, JAYS will field its candidates independently as Madhya Pradesh has six LS seats reserved for STs and four for SCs,” the legislator said.

Out of the total 29 Lok Sabha seats in the state, six (Shahdol, Mandla, Ratlam, Khargone, Betul and Dhar) are reserved for STs, while four (Bhind, Tikamgarh, Dewas and Ujjain) are earmarked for SC candidates.

Asked whether he will contest the 2023 elections as a Congress candidate or under the banner of JAYS, the physician-turned-politician said “JAYS will take a call on it and whatever decision is taken, I will abide by it.” In the current Assembly, the Congress has 30 ST MLAs, while the BJP has 16 and one tribal candidate was elected as an Independent in 2018. Similarly, the Congress has 17 SC MLAs and the BJP has 18.

Alawa said if ST and SC MLAs join forces, they will become a major force in formation of any government in the state.

Tribals constitute about 17 per cent of Madhya Pradesh’s population, while this share for SCs is higher at 21 per cent.

To expand its reach and get more tribals in its fold, the organization has been raising a host of issues related to the community and presented a list of demands.

JAYS has asked the MP government to ensure educated tribal youths get jobs at all levels of the administration – from panchayat to state secretariat – to broaden their participation in governance.

The outfit has demanded the government must fill vacant posts and also create new job opportunities for adivasis.

JAYS has demanded implementation of all provisions mentioned in the Fifth Schedule of the Constitution.

The Schedule deals with administration of areas where tribal communities are in a majority. Advisory councils formed under the Schedule deal with welfare of scheduled tribes in states.

The outfit has sought a halt to displacement of tribals in the name of development projects and granting of land rights individually as well as on community basis to people living in jungles since generations as per the Forest Act of 2006.

It has also demanded empowerment of traditional gram panchayats under the Panchayats Extension to Scheduled Areas (PESA) Act and filling up of vacant posts for SCs/STs in various government departments.