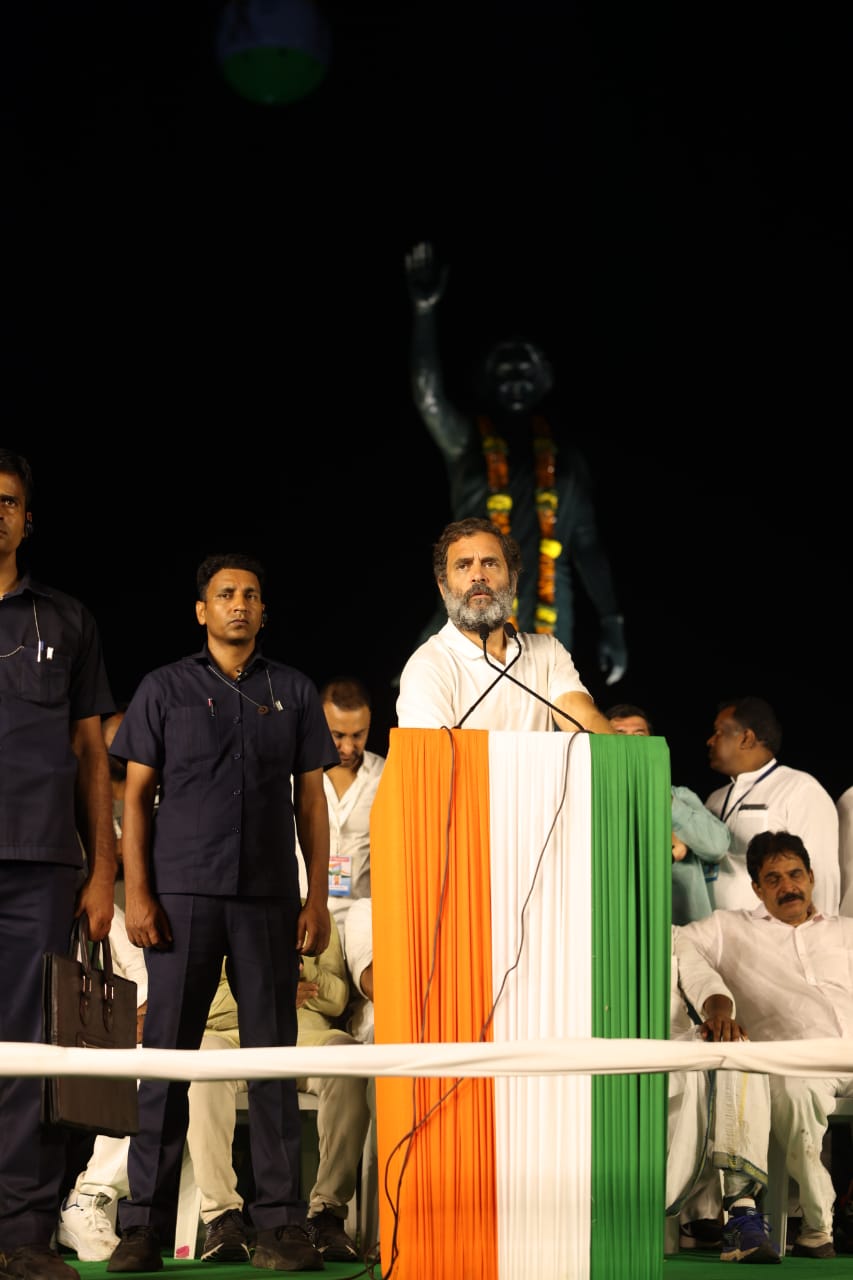 Alleging that the Bharatiya Janata Party (BJP) and the Telangana Rashtra Samithi (TRS) work together, Rahul Gandhi claimed that the TRS chief is in direct contact with Modi.

“The Chief Minister has a direct line with Modi. He picks up the phone here and Modi picks it up there. Modi gives order to the Chief Minister that ‘you have to do this today’,” the Congress leader said.

Rahul Gandhi was addressing a public meeting on Necklace Road in the heart of the city on Tuesday as part of the ‘Bharat Jodo Yatra’.

Stating that BJP and TRS work in unison, the former Congress President advised people not to be under any misunderstanding. He also alleged that KCR does dramas before elections.

The Congress MP recalled that whenever BJP brought bills in the Parliament, the TRS blindly supported them.

“The TRS also backed the three black farm laws. Whenever the opposition raises an issue in the Parliament, TRS raises some other issue to divert attention,” he alleged.

Rahul Gandhi also took a dig at the TRS government for poor infrastructure in the state, saying that there are more potholes than roads in Telangana.

“I thought Delhi was most polluted, but found Hyderabad is at number one,” he said.

The Congress leader said that he interacted with the farmers who told him that despite working for 24 hours, they don’t get any profit from agriculture. He alleged that the BJP government at the Centre and the TRS government in Telangana are not helping the farmers.

“They are not giving MSP, not providing loan waiver but brought the three black laws and are trying to snatch what belongs to the farmers,” he said.

Rahul Gandhi said he also interacted with people, who despite holding degrees like MBA, engineering and MBBS have no jobs.

“An engineer delivers pizza and works for Swiggy, but he can’t do engineering,” the Congress leader said.

Rahul Gandhi recalled that the Prime Minister had promised 2 crore jobs every year, but these days he has stopped talking about it.

“Both the PM and the CM don’t talk about employment now. The very backbone of the employment system has been broken. Employment is provided by small and medium businesses and farmers. Modi brought demonetisation and wrong GST and during Covid he did not lend a helping hand because of which small and medium businesses were badly affected for which they are unable to provide jobs now.”

The Congress leader alleged that the Modi government works for selected people in Delhi.

“Modi has 2-3 friends and the entire country knows who his friends are. Modi is handing over ports, roads, airports, telecom and LIC, which are the assets of the country, to his friends,” Rahul Gandhi said.

He also said that small businessmen and shopkeepers can’t take loans, but some selected industrialists can get loans worth lakhs and crores of rupees.

“A farmer is jailed if he can’t repay a loan of Rs 50,000 or Rs 1 lakh, but when billionaires are unable to pay their loans, they are not called defaulters, but NPAs,” he said.

Rahul Gandhi also recalled that when the price of cooking gas cylinder was Rs 400 and price of petrol was Rs 65 a liter, Modi used to criticise the then government, but today he has gone silent.

The Congress leader said the Bharat Jodo Yatra is against price rise, unemployment and also against violence and hate being spread by the BJP and RSS.

“This is not a mere yatra, but it is the true voice of India. Lakhs of people walk together and they are from all religions and castes,” he said.

The Congress leader was all praise for the people of Hyderabad for making the city an information technology hub.

“If you want to remain an IT centre, you can’t move forward with hate and violence. Only with love and brotherhood can this state and Hyderabad move forward and this is in your history, culture and in your DNA,” Rahul Gandhi said.